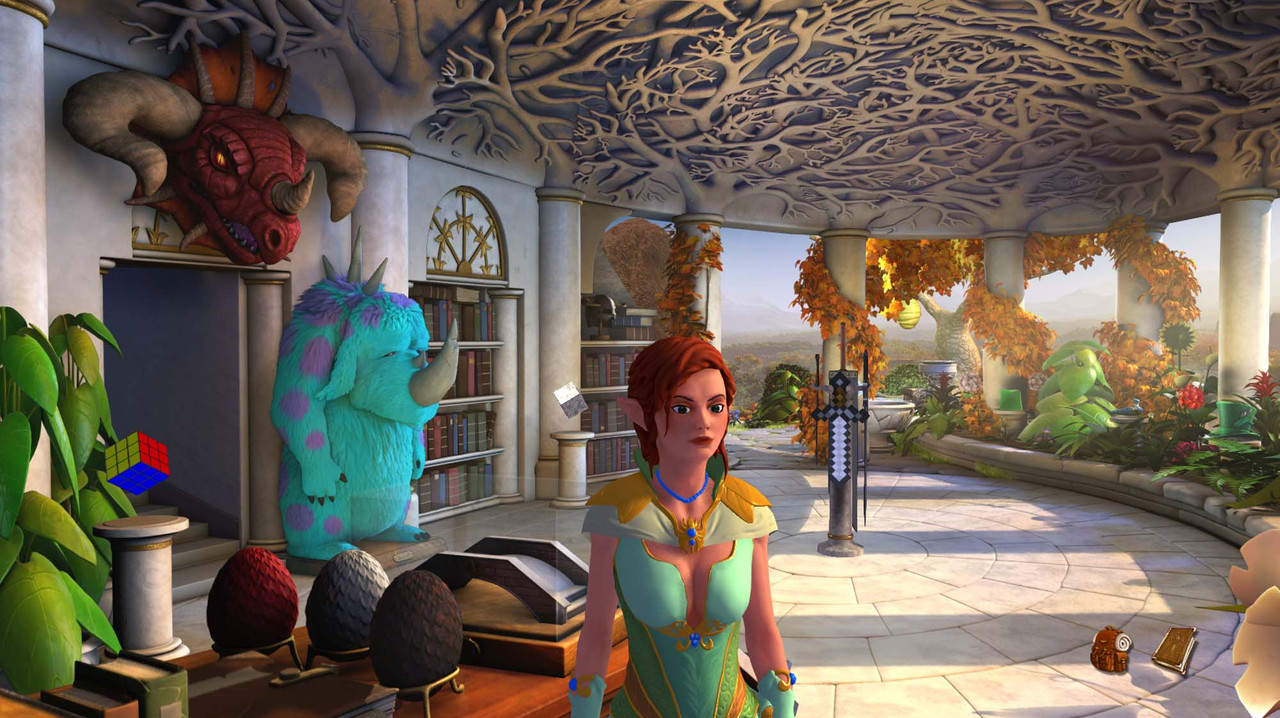 Review: The Book Of Unwritten Tales 2

It’s been an extremely long time since I’ve played a point-and-click adventure. In fact, the last time I played one was Grim Fandandgo when it was re-released on the PS4 not too long ago, but before that, it was Escape from Monkey Island. Yeah, it’s been a while. Despite the ridiculous amount of time that it’s been, I was overjoyed to be given the opportunity to play The Book of Unwritten Tales 2.

The Book of Unwritten Tales 2

The art of style is very reminiscent of LucasArts’ Escape From Monkey Island. It’s a beautiful and charming art style. Both the characters and the landscapes are gorgeous and beaming with vibrant colors. What really struck me about this game wasn’t the great fantasy setting and story, it’s how Nordic Games has littered the world with so many references and inspirations from everything geek culture. One of the first areas I visited was a library, which housed three dragons’ eggs from Game of Thrones, a Rubik’s cube, the Iron Helmet from Skyrim, a Weighted Companion Cube from Portal, and a Rhino that resembles Sully from Monsters Inc. It can’t go without mentioning how the wild plants in the game are inspired by classic cult movies like Little Shop of Horrors and Attack of the Killer Tomatoes. There’s even a weapons rack filled with various swords from numerous video games, most notably Cloud Strife’s Buster Sword and the sword from Minecraft.

Even though the audio levels can be customized, the default settings are wonky at best in The Book of Unwritten Tales 2. The solid voice acting is constantly drowned out by the fantastic orchestral arrangements. There were numerous times when the dialogue was too quiet or too loud during many a social interaction, however, after messing with the audio levels, conversations played out organically and demanded that I pay attention to them, so as not to miss any potential clues or a vague descriptions as to what I needed to do next. In classic Point-and-Click fashion, there’s a lot of dialogue directed toward me, making me feel like I’m a part of the story. There are times when the lip-synching doesn’t quite match up with what words are being spoken, which isn’t a bad thing considering this game was originally dubbed in German. The characters are very hard to control because of their lack of responsiveness. There were too many instances where I felt my controller was dying, only to find that I was running on a full charge. It made objects difficult to interact with, and I was struggling to not run into numerous objects, even though I was holding the stick in the appropriate direction to avoid or walk around them. Once I was able to get the characters in front of the objects I could interact with, it was nice to be able to look at the multitude of them easily with a flick of the right stick in the corresponding direction—something that was easily done by moving the mouse’s courser over them on the PC.

A point-and-click adventure wouldn’t be complete without numerous puzzles to drive the story forward, and The Book Unwritten Tales 2 is no exception. Many of the puzzles—with the exception of the first few—demanded that I pay attention to earlier conversations and use my intuition to better solve them. I was doing a lot backtracking to find the necessary items or combine the proper combination of things inside my inventory into a singular object. After completing any specific task for any given puzzle throughout the story, an audio cue would blare loudly to signal my triumphant accomplishments—making me feel happy inside. I don’t remember point-and-click adventures really testing my problem-solving skills, but then again, it’s been a very long time.

The Book of Unwritten Tales 2 combines great story, humor, characters and an immersive world into something that pays tribute to everything before it, rather than stealing from them. It’s a great comedy with great writing, beautiful set pieces, clever puzzles and an overall great experience. At the bargain price of $20.00, The Book of Unwritten Tales 2 is an overall fantastic point-and-click adventure.