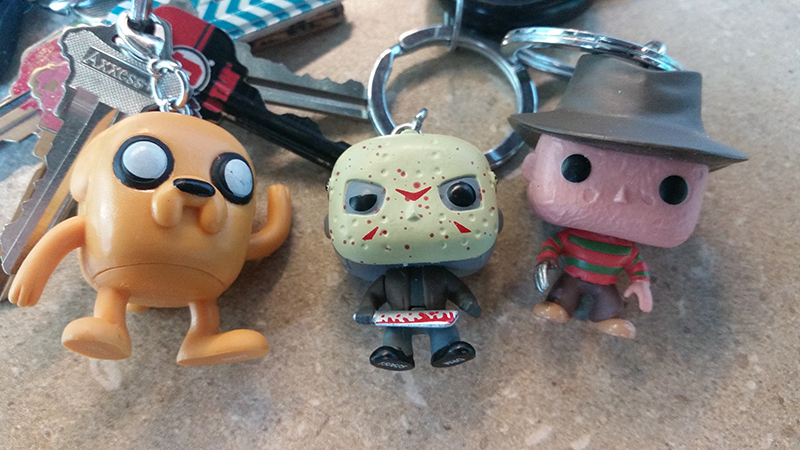 These Pocket Pop! Keychains are everything you love about the Funko figurines but miniature and travel-sized. They look just like their normal-sized counterparts, but are just small enough to be acceptable to put on your keyring. Even though Funko figurines and Pocket Pop! Keychains are simplified versions of their characters, they still manage to add a lot of detail to them.

I’m a huge Adventure Time fangirl, so naturally I was stoked to see Jake the Dog done in Funko form. Funko has this talent of taking anything, even the most ugly or gruesome character, and making them adorable. However, Jake is already adorable and pretty much looked like a Funko-style character to begin with, so this was not a huge change. They did actually keep his figurine proportional to the size of the actual character, so he is an exact likeness of himself from the cartoon. I love the fact that they make Jake even cuter than his normal self and made him travel-size to boot.

The Twelfth Doctor from Doctor Who was also Funko-fied and is just as dapper and distinguished as his actual character. The attention to detail here is pretty fantastic, they have his silver-gray hair which is just ever so slightly askew, his suit jacket is partially open with the red detail, wrinkled pants and, of course, his sonic screwdriver. It’s like Funko actually took Peter Capaldi, cast their magical Funko spell on him, and then miniaturized him so I could keep him in my pocket. It looks like the doctor is my travel companion this time.

Seeing Freddy Krueger from A Nightmare on Elm Street be Funko-fied was equally hilarious as he is adorable. As I mentioned before, Funko really possess the talent to take something scary and make it the cutest thing you’ve ever seen, and poor Freddy Krueger was a victim of this. Freddy is complete with raised scars on his face, blood on his hands, and a tattered sweatshirt. His hat is even a little burnt as well as having burn scars on his face. But you don’t scare me Freddy Funko—I can see past all of the blood and those flesh-ripping claws of yours to the adorable Funko that you really are.

Even better than Freddy is Jason from Friday the 13th. Even with his bloody machete in hand, he’s the most adorable thing I’ve ever seen. I mean seriously, Jason Funko is so adorable it’s disgusting. He has his signature hockey mask from Friday the 13th Part III, his brown leather jacket and even has raised scars on the back of his head. I never thought that in my lifetime I would ever use the word “adorable” to explain Jason Voorhees from Friday the 13th.

I love that Funko made these Pocket Pop! Keychains, and I hope that they eventually make one for every Funko figurine they have. I like that I can actually carry them around with me all day and laugh at how adorable Jason Funko is instead of just having them sit on my shelf at home. I look forward to collecting the rest of the Pocket Pop! Keychain’s and adding them to my messenger bags and keychains.