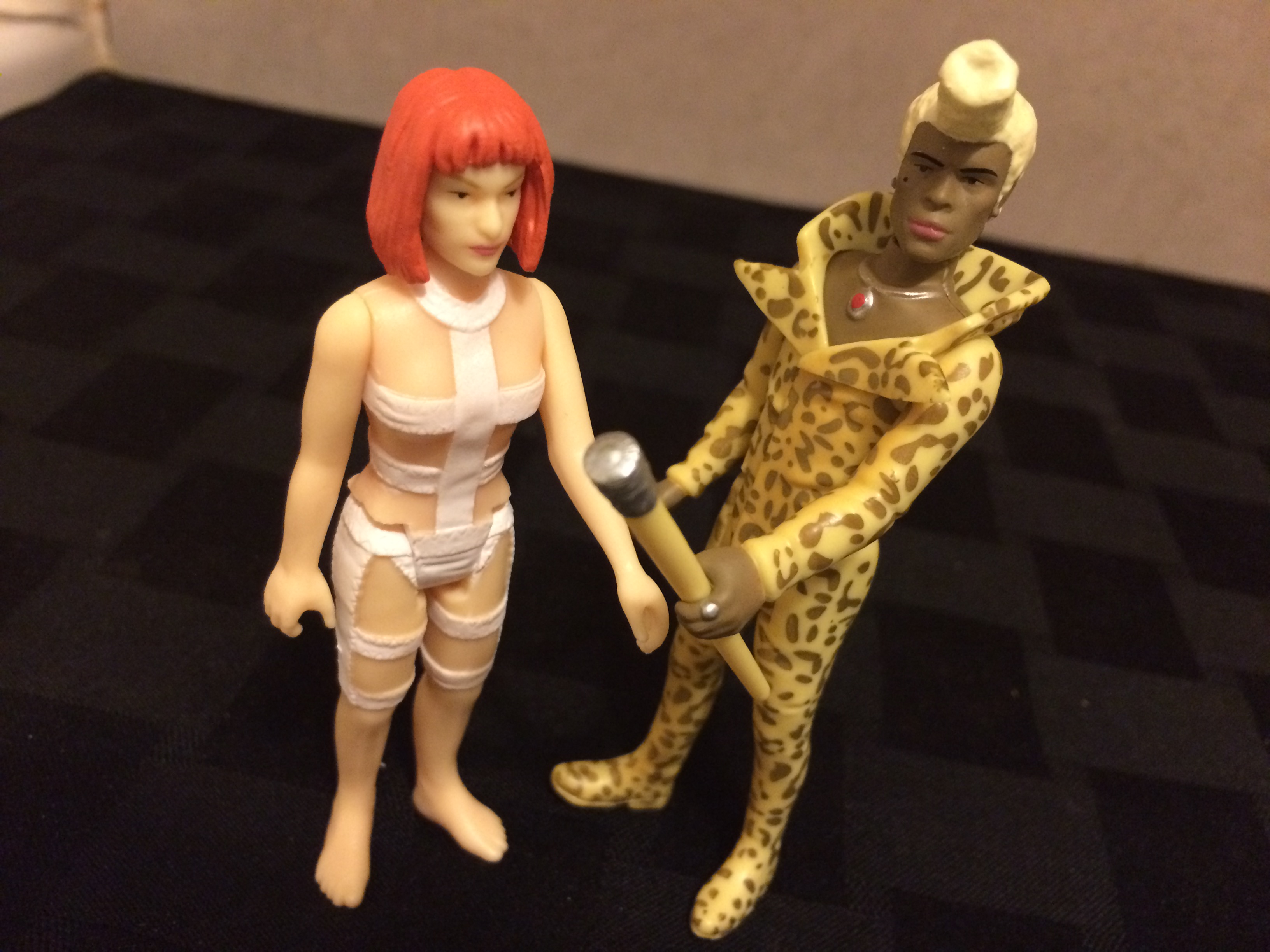 One of the biggest films to have an impact on my life was The Fifth Element. It was weird enough and sci-fi enough to capture the imaginations of millions, become a blockbuster hit and eventual cult classic across the globe. So imagine my frustration as a teen growing up and not having any real collectibles or toy-related fare to get matching the film. Yeah, sure, figures and busts and other products came out over the years, but nothing that really screamed, “This is a toy for the film!”

Which is why my heart filled with joy when I learned that Funko and Super 7 would be releasing a series of Fifth Element ReAction figures—the perfect toys for me to pretend I’m a kid again, while also making the fake adult I pretend to be jump for joy! The fine people at Funko sent us three figures from the series: Korben Dallas, Ruby Rhod and Leeloo in her straps costume after she’s reanimated. All of them are your standard 3 ¾” posable action figures you used to get in the late ’70s and early ’80s—just shy of the era when G.I. Joe made every joint movable so you could stick them in every pose possible.

On the surface, there’s limited mobility to each figure—limited in that you can only really move the arms and legs, as well as adjust the head. But hey, back in the day, that’s all you really needed—your imagination did the work for you. Even though there are no vehicles or movie sets to pose the figures in, they have the small peg holes on the bottom so you can stand them up in any playset from that point in time. Which means, yes, Korbon Dallas can fly the Millennium Falcon, and Leeloo’s multipass will give her boarding accommodations.

Speaking of additions, each character comes with props to give the figure a little something extra to do. Korben and Leeloo come with a standard gun and their own element stones, while Rhod comes with his signature mobile broadcast microphone cane, beaming his show across the galaxy. For what its worth, the costumes do come with nice details. If you’re a toy snob, this isn’t for you, as it’s not going to come with 27 points of articulation. What it does have is enough detail to make sure the figure matches with what’s there. Last thing you ever want in a figure is to have details off or misappropriated colors in the look. And while not every piece of jewelry is hanging off Rhod’s body, the costume itself is fantastic and matches well with the film.

Now the big question is: should I take them out of the box. ABSOLUTELY! Because guess what, kids. Very few toys ever appreciate over time and collect value. Even if you boxed these up, threw them in a time capsule for 50 years, dug them up and threw them onto whatever the futuristic version of Ebay—they’re only going to be worth an extra $7, if you’re lucky and the currency hasn’t changed over to whatever will replace Bitcoin in 2020. Point is, take them out and have fun with them! Even if they sit on a shelf and you pull them down once in a while to watch them movie with, it’s still going to bring you much more joy than if they sit on a shelf next to all the other potential memories you didn’t open up.

If you’re a Fifth Element fan, these Fifth Element ReAction figures are a must-have—not just for nostalgia’s sake, but because these probably won’t be around long. The other figures (which I wish I had) include Zorg, Diva Plavalaguna, a Mangalore and Leeloo in her standard jumpsuit attire. Do yourself the favor of plunking down the $70 to buy the whole set. That way, when the ultimate evil in the universe comes, you at least have people willing to help you.