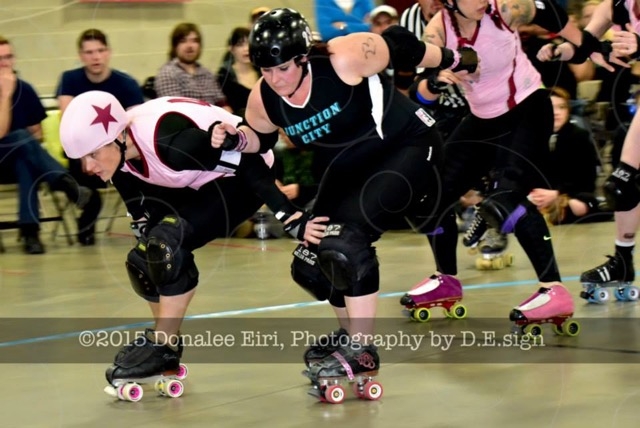 JCRD faced off with SCDG’s elite roller derby team on Feb 28. Photo: D.E.sign
Roller derby season is here! I mean, unless you’re a roller derby person—for you, it’s ALWAYS roller derby season. However, now is the time the bouts start happening on a more regular basis, and the games that count for your roller derby team’s rankings will be played over the next few months.
Ogden’s Junction City Roller Dolls kicked off their season opener with an all-weekend multi-bout, held at the Golden Spike Event Center in Ogden. Junction City Roller Dolls welcomed several teams to their home turf. In attendance for the weekend were the Sacred City Derby Girls (Sacramento, CA), Pikes Peak Derby Dames (Colorado Springs, CO), Grand Junction Roller Girls (Grand Junction, CO) and our local Salt Lake City team, Wasatch Roller Derby.
Junction City’s first game of the multi-bout weekend was Saturday at 6 p.m., where one of their travel teams, the Trainwrecks, faced the SCDG Sacrificers. The Sacred City Derby Girls are Sacramento’s number-one-ranked flat track roller derby team, and they are ranked 55 in the Women’s Flat Track Derby Association (JCRD comes in at 88th ranked). The rankings are for roller derby teams that are registered with the WFTDA with over 300 registered teams nationwide.
As the teams lined up on the track, on sight alone they seemed evenly matched. If you did not know the background of the two teams, you might be expecting a close-fought game. The first jam started and the Sacrificer’s jammer, Ariel la Twister, took the position of lead jammer, passing through the pack several times and earning SCRG 20 points.  The SCDG defense effectively held the JCRD jammer, Pickles, and kept her from scoring any points.
The bout continued in a similar fashion, SCDG continued to score big, JCRD continued to play hard, push their limits and fight to stop the Sacred City Sacrificers. The first jammer from JCRD to gain lead jammer and put some points on the board for Junction City was Pickles. She fought and broke through the tough defense of the SCDG, met by huge cheers from the crowd.
At halftime, the score was Junction City 13, Sacred City 128.
Yes, 13 to 128! What surprised me was how hard Junction City continued to fight and how excited the crowd would get to see their home team make lead jammer or put up any points. This game wasn’t just about winning, it was about playing a hard game, ilearning from a better team and, most importantly, showing the roller derby fans a weekend full of truly talented athletes.
The Sacrificers held the Trainwrecks at 13 points for the first of the second half, but with twelve minutes left on the clock, Malibu Harpy of Junction City broke through the tight defensive wall of the Sacrificers, taking the position of the lead jammer and picking up three points for the Trainwrecks. Later in the second half, JCRD’s Bee A Tricks put up some points for the team. The crowd lifted the roof with their cheers and applause. The city of Ogden love and support their derby girls.
The game was a tough one for JCRD’s Trainwrecks, but the excitement from the crowd and the smiles on all of the players’ faces were not lost with the game.
Final score:
JCRD Trainwrecks: 26
SCDG Sacrificers: 254
Photos: