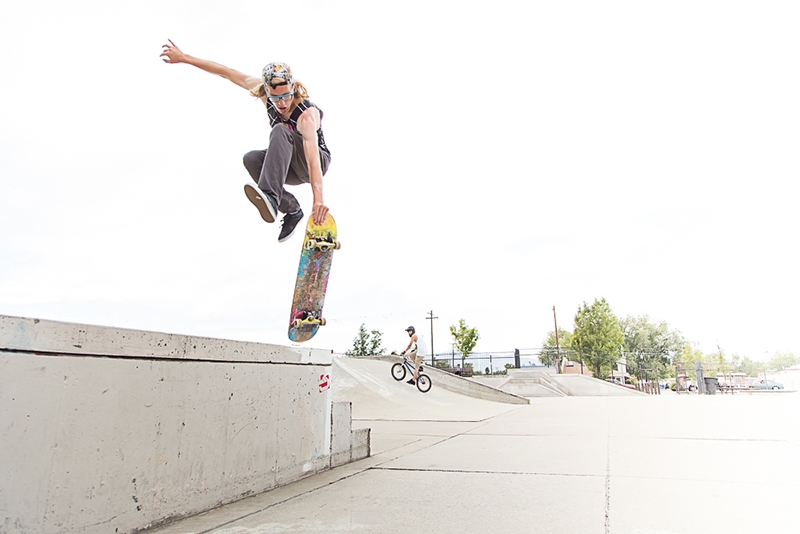 Taylorsville Skateboarding Park is under fire, and rumors of it being shut down have been circulating. It is one of the oldest parks not only in Utah but in the country as well, and its rugged landscape shows it. After an incident—a fight-turned-stabbing in July—concerns regarding crime and gang activity have increased, and the park’s existence was thought to be in jeopardy. Located off Redwood Road, a public park occupies the space around the skate park. This park is rough yet fun and accessible. SLUG set off on a mission to investigate the park and talk to some of the local skaters. July’s violent incident has sparked the worst publicity the park had received since the mid-2000s, when issues of vandalism put the park in a high-profile position. Having faced a threat like this before, local skaters were more than happy to share their thoughts on the subject and tell SLUG more about their home park.

With banks and transitions around the outskirts of the park as well as a couple of ledge lines in the corners, the park has a pretty good flow to it and a variety of different features. These features include, but are not limited to, oversized expansion joints, Bondo patches and Quikcrete fill-ins of all sizes. That being said, the Taylorsville Skateboarding Park is a must-visit for any skater. Though the ground might not be perfect and the cracks are more than enough to keep one on their toes, the park is beautifully imperfect—much like the raw street spots that we, as skateboarders, will forever seek. The old age of the park is more than prevalent—the concrete boxes and ledges are built with perfect right-angle coping on all sides, instead of the rounded-out coping that has become the standard for newer parks. A bowl corner with a sizable hip is a focal point for the park, in addition to some mellow transitions and a lengthy flat bar positioned perfectly under the lights. This park is a ton of fun! There are a few features that are less than inviting, but that is part of the beauty of skating old parks.

I spoke to some Taylorsville guys about their park and their thoughts regarding the plausible shutdown—something they were all too familiar with. Whether it’s fights, drunks or anything negative, the skate park tends to take the brunt of it. For one local skater, Chris Flandro, Taylorsville Skateboarding Park is like a second home. “I have been skating here for a long time now, and I know almost everyone who comes here,” he says. “It’s the best place to come hang with my friends, skate and just have a good time. It’s like a family around here.” With the next-closest parks being Midvale, Kearns or South Jordan—all a considerable distance away, especially via skateboard—the Taylorsville skate scene needs a park of their own. While the general public may see skate parks as a blemish on society, skate parks provide a place where kids—young and old—can get outside, be active, build friendships and get hyped. There is no more drug use at a skate park than there is in a high school locker room, and no more violence than a playground. Due to negative perceptions, however, skate parks tend to make the news more.

An old, rusty, dilapidated fence with several slats that are missing or broken surrounds the skatepark. This tetanus-ridden obstruction doesn’t even save a board from flying out of the park! Rough terrain and Bondo patches aside, the fence is one of the main concerns of local skaters—one skater, Joe Laurente, says, “The fence is the worst part about this park. Cracks and patches are one thing, but the fence needs to go!” Demolition of this fence would be a benefit to the public, the skaters and the police. Easier access for everyone and less of a “ghetto” look would create a cleaner and more positive atmosphere, as well as a clear view of the park from the road.

It would be a tragedy if Taylorsville Skateboarding Park were to be shut down. This park means a lot to local skaters and will be a classic for future skaters. Instead of spending the time and money to install cameras and put a police detail on call, some of that money could be spent on renovation and resurfacing of the park. No matter how one feels about the park, no one can deny that it serves as a place for kids to be active and have fun. Shutting down the park wouldn’t stop the trouble—it would just stop the kids.

Editor’s note: SLUG spoke with Taylorsville City Administrator John Taylor, who asserts that a shutdown is merely a rumor and that this instance of a shutdown threat was put to rest at city council meetings. To voice views of the park, he encourages folks to attend a city council meeting at the Council Chambers at 2600 W. Taylorsville Blvd. Room No. 140, which happen the first and third Wednesday of the month where anybody can make public comment at 6:30 p.m.