It was well before sunrise on the morning of Saturday, March 16, when the SLUG crew met  embarked on their extensively planned journey into the Great White North. The nerds had taken their stand at Brighton and left triumphant. Their calculated maneuvers, however, were no match for the beast that The SLUG Games was about to unleash upon the realm of Snowbasin Resort for the first time in history. The beast would come to be known as Winter Wizardry Presented by Scion. 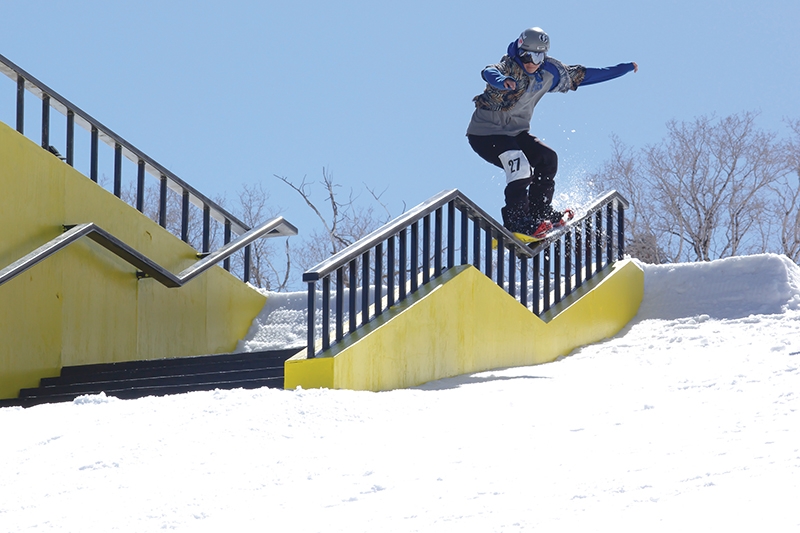 It was well before sunrise on the morning of Saturday, March 16, when the SLUG crew met up at the office and prepared to embark on their extensively planned journey into the Great White North, otherwise known as the land of Ogden. The nerds had taken their stand at Brighton and left triumphant. Their calculated maneuvers, however, were no match for the beast that The SLUG Games was about to unleash upon the realm of Snowbasin Resort for the first time in history. The beast would come to be known as Winter Wizardry Presented by Scion.

The wizards had declared battle. All that was left now was the hunt for a worthy proving ground in which these youthful skiers and snowboarders could compete. Snowbasin’s Terrain Park Manager Tim Eastley was appointed the important task, and along with his terrain park staff, Eastley was able to construct a world-class arena on-hill and slightly offset from Snowbasin’s Earl’s Lodge. Local artist Dusk painted the spellbinding fun boxes, and wizard-manufacturer Tommy Dolph created an army of sorcerers to stand as sentries along the course. In the mix of the wizards were two 25-foot down boxes, a gap to 20-foot wizard wand, a cheese wedge box jump and a 30-foot kicker for good measure. The highlight, of course, would have to be either the quarter pipe feature, located at the bottom of the course, with multiple plans for attack, or the plaza feature, which is a 100-percent replica of the famous Burlington High School stair-set in Vermont. This gargantuan feature brags one flat-to-closeout rail followed by an immediate 15- to 20-foot drop. To the right of the flat rail is an accompanying 10-flat-10-stairset featuring one down-flat-down kinked rail to the far right, and its twin anchored to the wall as a “creeper” ledge on the far left.  This is all mumbo-jumbo in “people talk,” but in the world of immortal wizards and action sports, something this big can only be described as “high-risk.”

As 11 o’clock crept up, SLUG staffers and park crew alike helped put the finishing touches on the already stunning course, Uinta Brewing poured fresh drafts of potion and shot games of corn hole, RAMP Sports offered free ski and snowboard demos and Park City’s Switchback Sports offered free wand waxes for the shreddy masses. Scion and Yelp also joined in with the rest of the tent village to offer hot chocolate and a few handouts to kick off the games with a bang. However, no one could have possibly predicted the magnitude of the blood shedding and rail-shredding onslaught that was about to ensue.

Warm-ups came shortly after final touches were tweaked, and faster than DJ Slap N’ Tickle (aka Jeremy Riley) could take his place atop the 20-foot tall quarter pipe/podium to blast his retrograde-’80s-dancepop-gangster beats, they were off! This was also about the same time that resident wizard and SLUG Games Events Coordinator Mike Brown stepped up on the podium to take a better look just in time to be flown over, as rider Ken Russell gap-to-cardboard-wizard tapped over the QP and judges underhead.  By high noon, snowboard judges Matty Ryan, Blake Payne, Lena Nance and ski judges Ian Wade, Blake Nyman and Molly Morris were in place waiting for the show while emcees BJ Emery and myself laid down the law of the land. It was decided that every heat of competitors, four in all, would get half an hour each to hike the incline-intensive course with finals consisting of the five best riders from each of their respected divisions, all going together for the last half hour.

Shortly following the riders’ meeting, skiers and snowboarders from the 17-and-under division began their half hour with stick slides on boxes and ended with all sorts of hip transfers and rodeos over and around the QP while still holding back their best tricks for finals. Snowbasin’s hardworking park crew was at the ready just as the young bucks finished their heat and cleaned up features while the open division made their way to the top of the hill. Returning champion Tara Woodward, the only female skier of the day, showed judges that she came to Snowbasin even more prepared to destroy the enemy with her style than she was at Brighton in January. Was it just by chance that no other women showed up to ski that day, or were Woodward’s first place-earning switch landings the intimidation factor?  Not even Saruman’s sharp, gusty winds, which carried away event tents throughout the day, could hold back the tireless souls, especially Zeke Greer’s multiple kinked gap-to-down rail hucks as he and everyone else got to know the arena better and better each run. At stake were prizes from Saga Outerwear, RAMP Sports, Milosport, Mica Watches, Nope Snowboards, Salty Peaks, Crossroads Boardshop, Discrete Headwear and Ogden’s very own Lucky Slice Pizzeria.

Two o’clock came by in less than no time, meaning that the broken-in course was finally ready for the best of the best to put all their chips on the table one last time. With the First Place podium titles still up for grabs, the contest’s survivors turned up the heat and started putting in work. To make it easier, Snowbasin’s park crew even gave hikers lifts to the top of the hill, making for faster runs and more opportunities for wicked tricks. Skier Rich Frogh was one of the first point-earning finalists when he switch gap to skier-slided the competition’s only down rail to 270 out. This would ultimately win Frogh one set of RAMP Skis for best ski trick.  Not to be outdone by skiers, Ken Russell was back at it, sliding 50-50s to 360s out from the flat-closeout rail to drop. Toward the end, Russell even got close to landing a double backflip over the QP. It was definitely more than his dreadlocks that would win him a brand new Nope Snowboard and the honor of best trick. These tricks were only a few of the otherwise attempted hardway-front-270s on the kinked rail, hang ups on the closeout and bashes on the boxes, which ultimately led to leaky nostrils, dislocations, shattered bones and bad-ass war stories.

When BJ Emery’s voice boomed over the speakers one last time, we knew that our champions were ready to be revealed. As no surprise to the men’s snowboard division, Ken Russell proved to be reigning champ for his overall consistency and fluidity. Nipping at Russell’s heels was none other than Zeke Greer, who more than earned Second Place, and Alex Paxson who finished in third. Our women snowboarders started and finished their day knowing that they were the only, and lucky, three. All Shauna Russell had to do before she won first place was to be slicker than her other two adversaries, Mandie Kaneko and Anna Gussendorf, who landed Second and Third Places, respectively. Chase Swanson’s name was the first to be called out for the 17-and-under dudes, snatching up a Third Place win. Slightly up the chain of command was Max Greeley taking up Second, followed by Trevor Otterston, the First Place flyer.

With skiers eagerly awaiting to hear their names be called, Emery shifted his attention to the plank walkers. Frogh would come to be the judges’ ideal choice for a First Place win. Close behind was Zachary Jenkins and Matt Newton, who were ecstatic to take home the titles of second and third. The 17-and-under skiers were especially tricky to judge, considering that there were so many of them and that some of them were hitting rails on tele skis. As the day came to a close, Milan Peyrin was crowned First Place for his determination. Jackson Jenkins followed in Second Place, and Parker Caldwell took away Third.

As The SLUG Games Winter Wizardry Presented by Scion came to a successful end, winners climbed to their victory on the QP, where Mike Brown The Purple handed out bedazzled trophy wands and awaited Christmas-esque, mall-style photos (minus the Santa and plus one wizardous Utah Jazz fan) with those deemed worthy of making a podium appearance. Our long list of generous sponsors also made sure to leave us with enough freebies to give everyone a fighting chance at walking away gifted, thus creating a spiraling product toss hurricane for the books. If this year’s contest passed you by, fear not, the beast will be back next year fully rested with more surprises already being planned!