When you’re young, you snowboard when you are lucky enough to take a vacation, and sometimes you find an exotic mountain. Add in the talents of Kyle Harmon, Evan Wilcox and Ryan Ting, and you’ve got yourself a slaughterhouse of super C-rails, fence gaps and poached pipelines with a playlist to match. 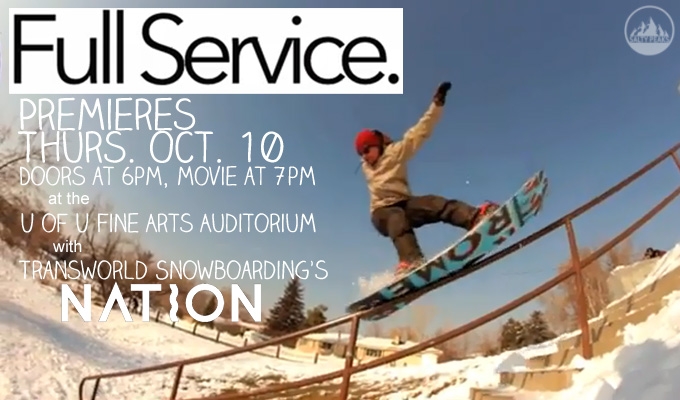 Throughout any given winter, with all the GoPro fever that so much of our populous has interweaved with their adventures, it’s normal to see steady streams of ski and snowboard edits make their way on YouTube or Vimeo. The dissipating art form that subsequently suffers from these freedoms of expression is that of film. We came together on Thursday, October 10 at the University of Utah’s College of Fine Arts to premiere director Leif Draznin-French and team’s full-length on the 2012/13 season and a taste of summer. This was Full Service.

With a big thanks to the University’s One Love Snowboard Club for hosting the night, these guys were able to offer this group of local riders a theater which has premiered the likes of Eddie Grams’ Variety Pack movies back in the day and most recently works from Lick The Cat. It’s truly awesome as shit that these waves of smaller independent movies are reviving themselves and being offered to the Planet Earth. To cap it off, supporting companies like i.N.i Cooperative, Red Helmets and Coalatree pitched gear for a product toss while Transworld Snowboarding doubled the feature with their new banger of a flick, Nation. Owner of Utah’s own Niche Snowboards, Dusin Morell, and his cohort Kirsten Chapman Kolter even came out to show off some of the new season’s line and to pitch a deck for raffle.

If 40 free pizzas and a two dollar show isn’t enough to draw out a crowd of college kids, then I don’t know what’ll do it. Before the lights dimmed, One Love eased through their hospitality in time for friends to catch up and we were off to the races. Up first was the local crew with an opener from Brighton Digger Chris Frost—surely worth a gander. Frost has stapled himself to the Minnesota, SLC and Oregon crowds throughout the years, while putting most of his dedication into the ranks of the Rome Snowboards team.

Up next and sprinkling a little more truth to the sweetness of this movie was Head Digger at Windells Snowboard Camp, Everest Arnold. What has makes these up-and-comer productions so key in their existence is the diversity. Without having the financial backing to devote their entire lives to a snowboard part in a movie, these riders are forced to make a name for themselves off the clock from their school, resort or restaurant careers. Because of this cycle, riders and filmers alike must pave the way for others by finding new features to work on and also add a diverse mix of well-known backcountry or street spots. It’s what makes future dream and the public stare—Arnold’s Jimi Hendrix song pick also helped turn some heads to the screen.

When you’re young, you snowboard when you are lucky enough to take a vacation, and sometimes you find an exotic mountain. James Fleege was that man this year. Adding in a little Alaskan flavor to put the cherry on top, Fleege also filled his part with the dirt and the nasty of Utah’s roughest concrete jungles. Add in the talents of Kyle Harmon, Evan Wilcox and Ryan Ting, and you’ve got yourself a slaughterhouse of super C-rails, fence gaps and poached pipelines with a playlist to match. These guys have made appearances in a few of their own productions in the past years, so it’s no lie saying that they’re past the trial and error phase, and they’re geared up to throw shit down.

As for Transworld’s Nation, I’ll let that movie mostly speak for itself since it’s been out long enough for everyone to see it, and words can’t do it justice. I will say that Xavier De Le Rue is a backcountry pioneer out of the insane asylum and that Dylan Thompson, Chris Brewster and Gulli Gudmundsson can do things to rails that I wouldn’t wish on anyone’s mother. This movie has been hands down one of my top three favorites for premier season this year.

As of now, Full Service can be found on any of the few DVDs that your homie got from a homie. Give it a week or two and it’ll be burning the corneas out of every living soul on the Internet that needs a lesson in self-creation. Nation, on the other hand, is running strong on iTunes or you can learn all about the hard copy on the exclusive website. Remember it’s not too late to throw yourself into the game! If you’re a University of Utah student, the One Love Snowboard Club is your number one source for all of it—get on that membership and their events are free for your awesome self. For those taking the more abstract route of life/college, go get into the streets and keep local creativity young and forever in Salt Lake City!