Niche Snowboards founder Dustin Morrell knew that without presenting a totally new niche on the table, their dream would be short-lived. “There wasn’t a 100-percent eco-friendly company from the ground up with focus on everything that you do,” says Ana Van Pelt, Niche’s creative director. So in 2009, Salt Lake City got a little bit greener. “Simply put, we make boards that have a positive impact on the planet and snowboard industry,” Van Pelt says. 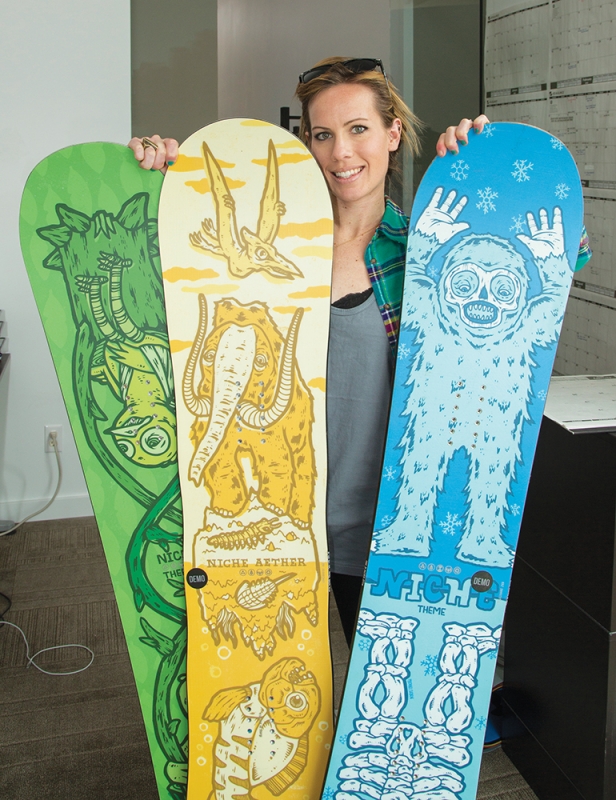 Over the years, Utah has become home to the snow sports industry. From several of the biggest names in the game calling this place their bat cave to the retailers who ship mass amounts of products that keep our nation hooked on everyone’s favorite powdery white stuff, this really has to be the place. What can’t be said nearly as often, however, are the words “founded in Salt Lake City,” and despite the fact that there are those who have tried, many new ski and snowboard companies have sunk into the cruel, salty depths that are our economy and retail industry.

Niche Snowboards founder Dustin Morrell knew that without presenting a totally new niche on the table, their dream would be short-lived. “There wasn’t a 100-percent eco-friendly company from the ground up with focus on everything that you do,” says Ana Van Pelt, Niche’s creative director. Dustin, already familiar with making snowboards out of his garage, saw an investment opportunity for him and his uncle, Phil Morrell, who already owns a nonprofit and several small businesses around town. So in 2009, Salt Lake City got a little bit greener. “Simply put, we make boards that have a positive impact on the planet and snowboard industry,” Van Pelt says.

Now, big claims can hardly come without big proof, and Niche has lots of it, inside and out. Just looking at a board for two seconds, you can see the recycled base, edges and sidewalls that keep all the guts inside. Digging a little deeper, Van Pelt tells me about bio-resin, which comes from the industrial waste streams of the wood pulp and paper industry, and also happens to glue their FSC Certified wood cores to all of the other layers that make up some of the greenest snowboards on the planet. “For starters, we use hemp stringers instead of carbon fiber stringers,” Van Pelt says. “We also use basalt instead of fiber glass. Basalt comes from volcanic activity, and its high strength-to-weight ratio means that less is needed to make a snowboard. It helps the board to be light, but it’s also a little stronger.” All of this comes out of the GST factory in Austria. On top of being a workshop solely dedicated to manufacturing snowboards for some of the biggest names in snowboarding, GST turned out to be the only place with the capabilities that are able to accommodate Niche’s very selective snowboard ingredients and building methods. “Plus, all of the materials that go into our boards are sourced from right around Austria’s bordering countries, which cuts down on us having to ship raw materials from all across the world,” Van Pelt says.

The best ingredients can make the best product, but without sweet artwork, you might as well strap yourself to a tree. Of course, Niche gets the graphics ball rolling by using a special printing process that cuts up to 75 percent of the inks and energy wasted during just about any other printing process––they don’t use lacquer, either. The artistic aspect is analyzed just as thoughtfully. Van Pelt is proud to have seen her own design make it onto a deck, seen on the Minx graphic, but where’s the fun without a little diversity? That’s where Michael Sieben comes in. You may know Sieben best from his work with Thrasher Magazine, graphics on many Toy Machine skateboard decks, his company, Roger Skateboards, or the lookalikes that came after Target poached him. Sieben is down for Niche’s cause and will be around for snowboards to come—look for his work on boards like the Aether and the Theme. On a local note, Van Pelt informs me that we can also expect to see some work from artist Travis Bone, the man made famous by his poster contributions to the summer Twilight Concert Series in Pioneer Park. “Be sure to check out Bone’s website, furturtle.com. If I’m not mistaken, he was also featured in a book of beards,” Van Pelt says.

No snowboard company is what they are without a little help from their team. Someone has to ride the damn thing! This season, Niche was proud to announce a partnership with pro snowboarder Johnny Miller, most recently known his parts in the VideoGrass movies. “He’s awesome! Johnny really fits with us, especially because he’s so passionate about what he does,” Van Pelt says. There are also some very warm rumors that rider Derek Dennison may be the next to join the ranks of Niche. Until then, keep an eye out for team locals Everest Arnold, Sam Wittke, Treyson Allen and Todd Robertson as they destroy the streets and resorts across the valley.

It’s definitely not every day that you see a group of people, let alone a company, doing what they love while pushing for a huge, positive change in their environment. The coolest part about this story is that it’s happening right in our backyard. Van Pelt’s and Niche’s biggest message, however, is that the “Little things you do make a big difference!” Niche Snowboards can be found locally at Milosport, backcountry.com, Marty’s Board Shop in Park City and Crossroads Skateshop in Ogden. If you’re not completely sold on these guys, keep an eye out for periodical Niche snowboard demos at local ski resorts so you can test one out for free! For more information, go to nichesnowboards.com.