DJ Heinous Society provided the soundtrack as hordes of groms hiked feverishly to impress the judges with their pure guts and determination. Only the top five would advance to the finals, so it was now or never. 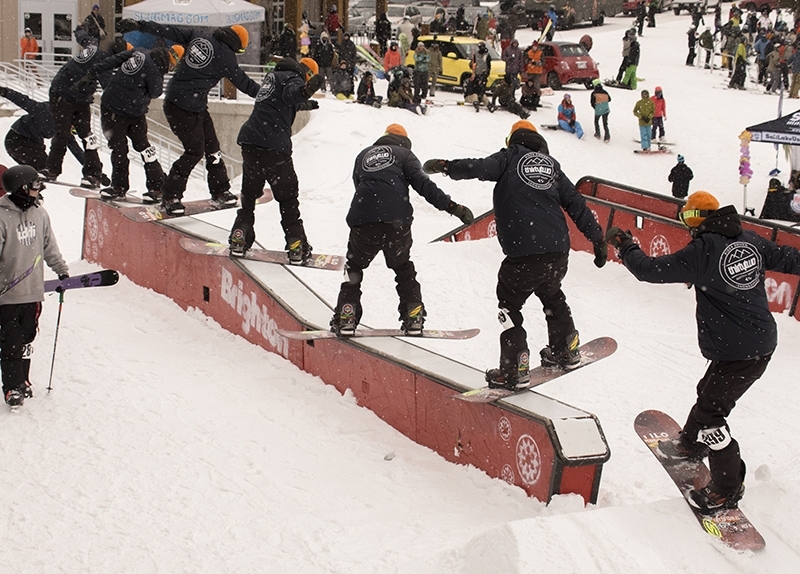 Switch board to backside lipslide looks effortless from Brighton local Treyson Allen. Photo: @_chriskiernan_ (IG)
This past Saturday Feb. 28 marked the second and final contest of the 15th annual SLUG Games ski/snowboard contest series, SLUG Games: Slash Bash Presented By Ken Garff Fiat. Housed once again at the base of Millicent at Brighton Resort, over 100 competitors turned up for their chance at local fame and a sack full of goodies. Numerous rail options provided the kids with ample features to showcase their skills and creativity. Mother Nature finally showed up as well to provide just enough dust to cover the crust but not enough of that Utah pow to provide slashables (after all, Best Slash was an awarded category).
The contest officially kicked off with the 17 and Under division. DJ Heinous Society provided the soundtrack as hordes of groms hiked feverishly to impress the judges with their pure guts and determination. Only the top five would advance to the finals, so it was now or never. Boys and girls on skis and boards took to the course with an energy I haven’t had in years (even waking up before 10 a.m. is a chore these days). Makes and misses, collisions and indecisions marked the first few minutes as the competitors figured out the course and a system of safely dropping in and out of the features. After a 30-minute whirling dervish of tykes with tricks, the judges headed into the lodge to deliberate over who made the cut. This would be the formula for the rest of the afternoon. Ski open followed the groms, followed by Snow open. Due to the sheer volume of competitors, I opted to warm my toes up and watch from the window as the field narrowed itself down for the finals.
One of the hardest parts of running a contest in this fashion is judging. Watching over 20 competitors sporadically hit features with no rhyme, reason or structure is a daunting task. After deep thought and contemplation, the judges handed the results over to MCs Jordan Brewer and Nate Christiensen and the finals were announced. SHOWTIME!
The finals of each division were intense! The talent of these kids these days is inspirational to say the least—factor in the competitive nature and the promise of free prizes and the bar began to ascend. New approaches to the course were found, gaps to rails, a makeshift hip, even a kicker appeared out of nowhere. These newfound features provided the skiers and riders more options and the chance to expand their technical tricks with some more circus-type aerial acts. Flips in, out and over were becoming part of the mix. I witnessed girls doing backflips, skiers trying 7s onto boxes and, to end the day, a double backflip attempt that was damn close! You couldn’t pay me enough these days to huck my carcass around a semi-icy slope, let alone convince me to get stupid for a free belt, but hey that’s what being a kid is all about, right? Having fun and crashing hard enough to tell you that with a few bumps and bruises that anything is possible (ish … sometimes … sorry—old-man cynicism). There was way too much action to include in here without boring the masses so I’ll simply put it this way: Everyone that competed deserved an award. Here’s the official results:

It’s been more than a hot minute since I have written for SLUG Mag, and today, I remembered why I do. As I waited for a coffee, a competitor anxious to learn if he advanced to the finals approached me. He was 7 years old and had been riding for less than a year. When we searched for his name, it didn’t appear. He was so disappointed that he didn’t make it. I gave him a pound and told him to keep his head up. To see that much fire and dedication in a kid so young was overwhelming and a reminder of why we all volunteer here. We are a community dedicated to supporting one another. Whether we are the old-timer reminiscing, the young rebel, the fashionista, the business man, or the next prodigy, we all play a vital role and inspire one another. Today, it was Alex Mallen that inspired me.

We’d like to thank all the volunteers that made the contest possible. Thank you to all the sponsors including Ken Garff Fiat of Salt Lake, Core Power, Freeheel Life Industries, iNi Cooperative, Izm Apparel, Milo Sport, Niche Snowboards, Outlaw Union BMX, Pit Viper, Porcupine Pub, Publik Coffee, RAMP Sports, Saga Outerwear, Salty Peaks, Warp Wrapz Goggles and Toogumshoe for all the product and support. We’d especially like to thank all the competitors for putting it all on the line. We had a great time and hope to make this event even bigger next year!