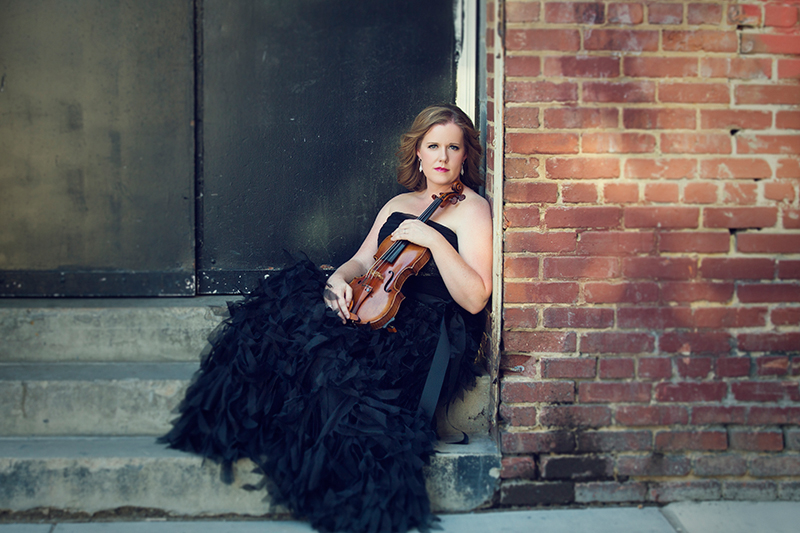 Exploring the Human Experience of Music with Madeline Adkins

SLUG: Can you tell me how you came to play on the “ex-Chardon” Guadagnini?

Adkins: Violins can be from $100,000 to many, many millions of dollars. So when you get into those higher end—especially Italian—instruments, they’re out of reach for your average string player. A lot of them are owned by museums or foundations or private owners, and I was really lucky to meet Gabrielle Israelievitch. Her husband, Jacques, was a Concertmaster for the Toronto Symphony for many years and they own a very fine Guadagnini violin. Unfortunately, he passed away about four years ago. Gabrielle wanted to keep the violin but violins shouldn’t just sit in a closet. They need to be played. They’re kind of a living thing and I think she understood how important it was for the violin to be played. Her husband had a lot of really fortuitous things happen to him during his career and she wanted to pay it forward a little. So we met and I’ve been borrowing that instrument from her for several years. It’s like a dream. People say ‘well what’s the difference?’ and it’s like if you got out of a Honda and into a Ferrari. It’s opened up a whole world for me in my playing ability and my musicality. It’s kind of like a partner to you. It’s just an incredible opportunity for me to get to play on something like that.

SLUG: How did you wind up at the Utah Symphony Orchestra? What was your audition process like?

Adkins: Musicians have a union and almost all of the orchestras in the country are part of it and they have a monthly newsletter with job listings. A lot of times, you know something’s going to become open because so-and-so is retiring, or whatever. Even if you think you’re not going to leave your current job, [the newsletter] still comes in the mail and you still open it to the back to see what’s open. It also helps keep you abreast of the industry and who is making moves. So you send your resume—they don’t accept everyone, obviously. And then they tell you if you’re accepted and you show up.

It’s kind of amazing, because my husband said to me once–you know, in the kind of conversations you have with your spouse—if you could live anywhere where would it be and he said ‘well I’d love to live in the mountains.” And I was like, well geez because almost every orchestra is on the west coast, the east coast, or a mid-west line. There’s only one full time orchestra in the mountains and only one job that would be worth leaving my second chair job in Baltimore, and that would be the first chair, the Concertmaster seat. So when I opened the paper that day and saw that job listing I just thought, “I’m getting this one.”

The hardest thing was that I had a Sunday afternoon concert that I was playing a solo on and then had an audition here Monday morning. I was on a 6:30pm flight out of DC and I flew out here but they lost my suitcase. My violin was aboard with me, [but] I didn’t have my audition clothes or my makeup, so I had to play in my sweats. I didn’t know for sure that it was going to be a blind audition because it was the first one they had ever done. So I went out during the break to the City Creek Mall and bought myself an outfit. It was all fine, except after it was all over they and they told me they had chosen me to come for a trial period and they wanted to meet me, so I said “can someone please tell them why I look like this?”

Then I came for a three-week trial period. For most big positions you’ll do a trial period with the orchestra because there’s a give and take. They want to see if they can work with you, if you’ll fit with their orchestra. Unfortunately, my dad passed away during that trial period. It’s a long process, and then it was another eight months until I could start because I was in the middle of a contract year with the Baltimore Symphony Orchestra.

SLUG: You have created and curated a lot of programming of your own design. Can you tell me more about what drives you to create certain programs and which programs you are most proud of?

Adkins: I’m always drawn to music that is more descriptive, that there’s more obvious meaning behind it. I found even something like a title was more influential on me than like, “String Quartet in G.” I was trying to connect the pieces in a way that I felt I hadn’t seen people doing. Usually thematically, but often with a twist. For example, one of the programs that I did for NOVA was called “Reflections.” It was three pieces by contemporary composer Andrew Norman who is really kind of a mover and shaker. And all of the pieces had their origin in glass or mirrors, like the windows of this Frank Lloyd Wright house or a mirrored exhibit in which you saw yourself from all of these different angles. And then I paired it with two other pieces—one of them was by Debussy set during World War I and was one of the pieces that reflected his experience of World War I. And [I also paired them] with the Dvořák bass quintet. His music is really steeped in the traditions and folk music of his homeland. So this piece was a reflection of his upbringing. These pieces aren’t related, but when you use the word “reflections” in two different ways it was interesting to me. And something that you can’t predict is how it feels when you play them all in a row.

SLUG: What kind of music are you drawn to—classical or not?

Adkins: I actually don’t listen to much classical music outside of work, because I get a lot of that. I’ve always been drawn to music that made me happy, so that’s a lot of things, but I’ve always loved disco. I like to just blast that music in the car like a dance party.

I have somewhat an eclectic taste but I actually don’t listen to as much music as you’d think. I sometimes feel like my ears need a rest. It’s hearing the violin or the orchestra all day. I’ll sometimes just turn on NPR for something different.

SLUG: The USO recently had a public campaign in which performers were depicted as rock stars. Do you see the future of orchestral music moving toward more public recognition? How do you see this campaign as contributing to this shift in attitude?

Adkins: I think every year they have a different approach, but one thing that was cool was that they wanted to feature the musicians. Because a lot of times in orchestras there’s a focus on who the soloist is that week or who’s the conductor or what piece they’re playing. But to feature the people who are in our community—it’s your neighbors, it’s the people who teach your kid’s violin lessons—we’re people, but we do this cool thing for a living. So I really appreciate the efforts to highlight the musicians. And people get curious about who we are and we’re able to create connections with the community that way. Plus it’s fun because I think it shakes up this idea that classical musicians are stuffy.

We like to connect with you and help you feel things. That’s the point of music: to help people feel something, whether it’s joy or sadness. Music can get in touch with people’s emotions in a way that nothing else can. I think any effort to get new people in the door so they can see for themselves that it’s maybe not the way they imagined is a step in the right direction.

SLUG: In March 2020, the Utah Symphony will premiere a new multimedia piece you commissioned called “The Maze” about the dramatic scenery and pictographs of the “Maze” section of Canyonlands National Park. Can you tell me more about what inspired you to commission this piece and what the multimedia components will be?

Adkins: As part of my discovery of some new composers I wasn’t aware of, I met Nathan Lincoln de Cusatis at a chamber music festival in Jackson, Wyoming just a year ago. We played a piece that he had written for the festival and the piece was about Wyoming and he integrated Shoshone native creation myths and conservation texts from Edward Abbey and all of these different things that were so Wyoming into this amazing whole.

We got to chatting and I asked if he had ever written a violin concerto and he said that he hadn’t yet. And said he was going to Utah to hike The Maze, which is that remote section of Canyonlands. He said if he did write a concerto it would be called “The Maze.” So we came up with the idea and I approached the Utah Symphony to originally see if they would be interested in performing the piece the following season, but this year’s theme is “From the Canyons to the Stars” and we’re doing all of these pieces about nature and pieces about Utah specifically. “The Maze” would fit in so well [that] they asked me if he could have it done by this season.

He came up with some amazing ideas. There is a main overlook [at The Maze] and he came up with this concept of echoes. This kind of echo is the very opening of the piece and it ricochets back through the violins and it comes back throughout the piece. We’re going to have pictures from the National Park Service that are going up during the piece.

I just felt like the title was very evocative. You could go a lot of directions with it. Of course, it means literally “The Maze,” but he says that the violin plays the role [of] the observer. I think it’s going to be really cool. We’re only doing it once here in Salt Lake City and once in Orem.

SLUG: What is something you dream of doing one day in the orchestra world but haven’t had the opportunity to do so yet?

Adkins: I think being in this job has ticked off a lot of bucket list items for me. The good thing about being a violinist is that there are so many concertos to play. So there’s always a rotating list of concertos I want to play. I’ve been kind of on a Mendelssohn kick—he wrote six string quartets and I’ve done four of them, so I’m waiting to do the last two. Of course, there are great conductors you hope to play with some day, but that’s a little more out of your control. I just take things as they come and then I get to play with Sting and I never even thought to put that on my bucket list.

I have been doing a lot of guest Concertmaster stuff in the last few years, being asked to come in and out of other orchestras that maybe have vacancy and need somebody for the week. And that’s really gratifying because you do get inspired working with a whole different group of people. So I’m hoping to continue that and get to travel to some really cool places, too. I’m just kind of happy with how things are going.