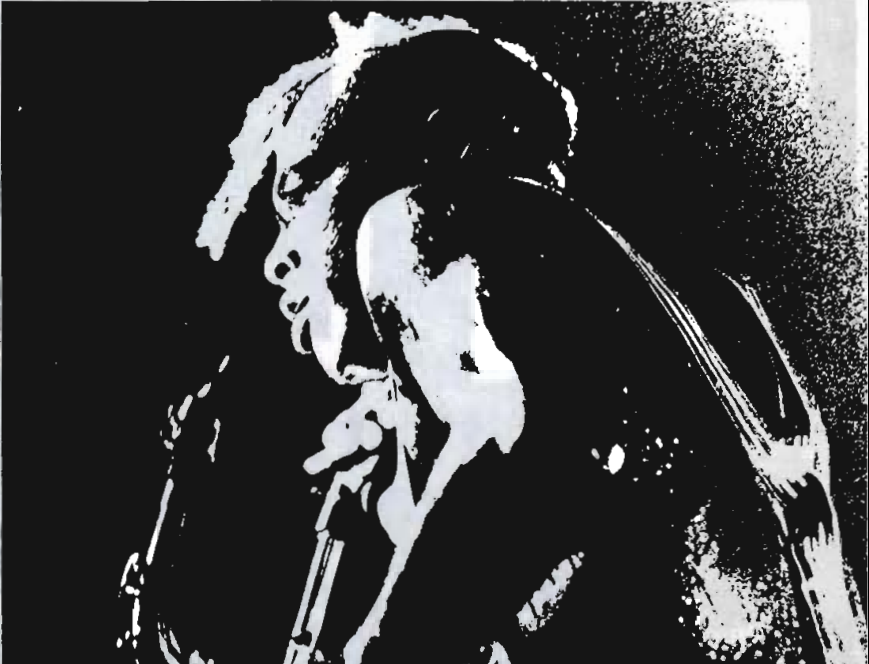 Dem Bones, dem bones. Fishbone made its presence known at the Speedway Cafe the night of December 3, to a very receptive and rattlebrained capacity crowd. Justly so, for a band that had played earlier this year at an Orem recreational facility to a sparse contingent of depressed Utah Valley types. However, acclaim accompanied the boys to the Speedway by way of their new album Truth and Soul cited by Rolling Stone as “[…] an incendiary marvel, even by their stiff standards.”

Fishbone would have fit right in the film Dance Craze and can easily capacitate opening for Eddie Murphy. Their ska and fusion rhythms are performed in a manner that is funny as hell. The sextet is one big ball of hopping, grimacing energy, fronted by single/saxman Angelo Moore, who wore a wiry mane of bleached mohawk dreadlocks and danced and sneered and sweated as if someone had laced his pre-game beers with acid. During the course of the set he was carried across the hall to the chant of, “To the back to the back!” as he squirmed and writhed and screamed into his remote microphone (makes you want to have one, doesn’t it?) Their sound was crazy and fat, with horns blazing and the bass thumping. I especially admired guitarist Kendall Ray Jones’ snippet of Jimi Hendrix’s “Third Stone From The Sun” as it surfaced in one of their songs. Lingering thoughts after the show pertained to whether James Brown was an influence. However, local sources revealed that the Fishboners were rather rockstar-ish (I think that qualifies as a word now), since they were quite indifferent to the people backstage, and requested a plethora of exotic booze before arriving in town. Nonetheless, their performance was riveting.

Opening the show was the Suave Mob Hip-Hop team who bounced and posed and made plenty of noises that went, “boom-chit.” (Incidentally, I saw these at the airport recently. I knew who they were because they all had the same big clocks hanging around their necks.) Following them was our beloved Dinosaur Bones, who were right on the mark. Singer JR Ruppel looked every bit like Joey Ramone with shop glasses, and confusion resulted when a surreptitious pair of panties landed on Brett’s drum kit. The crowd stirred them into delivering a tight and raunchy set, and the reaction was good. JR even initiated a sticker toss, which went off well. Guitarist Scott Bringard, a devout Bauhausian, looked and sounded good enough to ensue chicks to flock (sorry, Scott). Chalk up a good night for Dinosaur Bones.

All in all, there were no major altercations, and no one was seriously injured, so the Speedway can claim a victory, as can all who attended. Fishbone can plant it in SLC anytime.