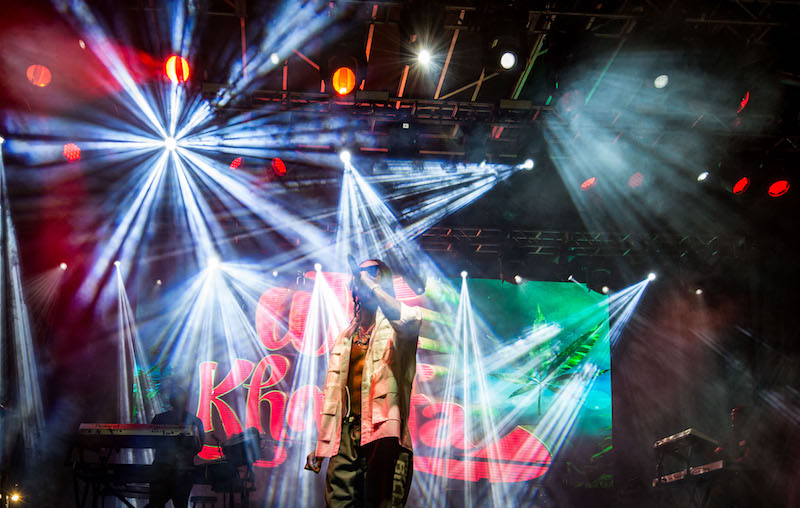 Wiz Khalifa in the bright lights.

Bonanza: an extravaganza; a situation or event that creates a sudden increase in wealth, good fortune, and prosperity. No definition could have better described the party found at the River’s Edge. Tucked beneath the looming wall of the Jordanelle dam, music lovers and festival goers gathered and celebrated the third extraordinaire in the warm summer sun.

Split between two stages, the arena was interlaced with vendors, food and entertainment. Top-up stations and merch booths greeted guests at the door, followed by booze, food and booths. From henna to CBD oil, the Vendor Village had local businesses selling and promoting their wares. Moving further in, food trucks lined the path with the delicious treats of pork sandwiches, mini donuts and Hawaiian rice bowls. Housing could be found at the end of the path, Between camping, cabins and Airbnbs, there was a plethora of places to stay for the three-day party. Droves of people flooded the venue, awaiting the joy that comes from good music, friends and sun.

Bouncing between the Shade stage and the Bonanza stage, the music began to float through the air. The first night brought the electronic, hypnotic genres of music. Among them were lovely musicians like MΛX, Oh Wonder, Rufus du Sol and ZHU. MΛX was a joy to see, dancing and singing in a Michael Jackson–like fashion, silver shirt and shimmering pants glittering in the sun. Rufus du Sol kept the crowd going, dazzling the mood with orange and yellow lights and deep dance music. Long after the sun had set, Oh Wonder came on the Shade Stage. Darling, British duo Josephine Vander Gucht and Adam West partied with the crowd, glowing under the bright lights. For the headliner and final show of this electronica night, everyone headed over to the Bonanza stage, gathering for the godly wonder that is ZHU. Starting off deep, he dropped “Dreams,” immediately exciting the crowd into a frenzy of epic proportions. Playing deep into the night, fans danced until the music quieted, wandering back to their beds, turning in to ready themselves for the next days adventures.

The next day kicked off another epic show with the likes of Hippie Sabotage, Snakehips, Local Natives and Wiz Khalifa. The sun beat down over the valley of music goers as Hippie Sabotage brother duo Kevin and Jeff Saurer partied with the crowd. Snakehips followed up that show with some crowd-bumping electro dance music that set the mood for the night. Heading straight for the Bonanza stage, Local Natives cooled the crowd down with their indie tunes, but did not fail to keep the excitement high. Bouncing back and forth, fans wandered to the Shade Stage for BØRNS before heading back to the Bonanza stage for the might Wiz Khalifa. Walking onstage, smoking hot, Khalifa got the crowd pumped and ready before passing giant balloon doobies that sailed through the night. The party didn’t stop there as many people headed into the woods for the Yacht After Party, hosted on a makeshift boat. Running into the wee hours of the morning, people met the next day with no sleep, and the hope for another great night.

After at least a few hours of sleep, Bonanza goers headed back to the venue for the final night, mixed with anticipation and sadness. This last set of shows included bands like Moon Taxi, Phantogram, MadeinTYO and Halsey. Rocking hard on the guitar, with wavy blonde hair, Trevor Terndrup showed off his talent and invited fans to see him again at the late-summer Salt Lake Twilight show. Once again on the Bonanza stage, Phantogram thrilled the crowd with their electro rock tunes. The sun beating down and the crowds dancing, Sarah Barthel and Josh Carter played one of the best sets of the whole weekend. For the final performance on the Shade Stage, MadeinTYO interacted in with the crowd, picking up a watermelon and making a tribute to XXXTentacion. The sun set on his show before bringing Halsey onto the Bonanza Stage for the last show of the extravagant weekend. Under bright fireworks and bouncing beach balls, Halsey played “Bad At Love,” finishing off the third year of Bonanza with a bang. Fans streamed out of the venue, some headed home, others headed to the Yacht Party, high on the weekend of friends, music, and sun, already counting down the days for next year’s Bonanza.