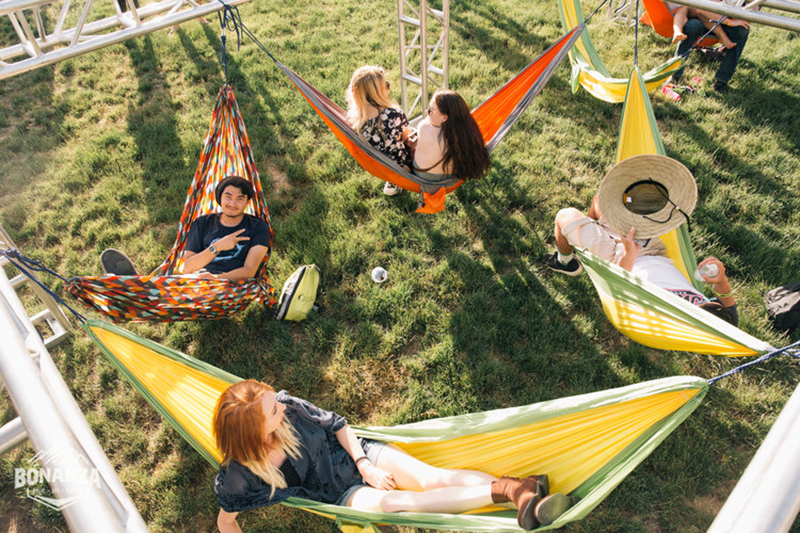 It’s been a year since SLUG Magazine first spoke with Vaughn Carrick, the creator of the Bonanza Campout Music Festival. Held in Heber City, Bonanza is Utah’s private Coachella or Burning Man, if you feel so inclined. You can camp. You can bungalow. You can just drive up to Heber City and hang out with a ticket if you like. Bonanza is Utah’s music festival buffet, with this year’s lineup including the likes of Airborne Toxic Event, Cut Copy, Kongos, Robert Delong, Eden and Utah-hometown favorites like The Moth & The Flame. The festival has everything you need, from food to outdoor necessities. Carrick was kind enough to chat with SLUG again regarding round two of Bonanza, and he is his wildly charming self as usual (you can hear his smile when he talks about music). He actually just got back from the Bottlerock Festival in Napa Valley and a reggae festival in Monterey, California (40,000-plus attendees, y’all), so he’s primed and ready for a chat about his corner of the festival world. SLUG: You got a hell of a line-up this year with ODESZA, Ms. Lauryn Hill, Nas, Chet Faker, Method Man, Redman and more. Swinging for the fences, eh?
Vaughn Carrick: Ha! We put some effort this year into putting together a group of musicians we were proud of and could create the Bonanza feel. This year, we really wanted to create something special.

SLUG: There’s more of a hip-hop focus this year. What was behind that decision?
Carrick: We don’t want to put Bonanza in a box, where every year, we have the same style. We want to switch it up. So when we had the chance to offer Ms. Lauryn Hill and Nas, who cater to Utah while being unique, we jumped at it.

SLUG: At what point last year did you decide to keep the ball rolling on Bonanza for a sequel?
Carrick: It takes a while to build a festival, so we went into this with a three-year plan. The first year was the investment, and this second year is the fruit of that. We’re definitely in it for the long haul.

SLUG: Are you guys hoping to be bigger than last year?
Carrick: We’ll see—the idea is to bring major bands that sell out crowds of 40,000 people to a 9,000-ish crowd. We want to keep it intimate.

SLUG: You’ve done a bunch of festivals, including Reggae Rise Up. Is there anything unique you learned about Bonanza from last year?
Carrick: I wouldn’t say I learned, so to speak, but we did find pressure points. Last year, we really sold Bonanza Campout, which lead people to believe it was just a campout. This year, we want people to know it’s a festival, and that you can campout if you want. Plus, we bumped up the camping to 3,500 campers from 1,500—so we want to be more available to the festival attendees. SLUG:  Last year, there was this incredible sense of community. Is there a process or a formula to creating that?
Carrick: I wish, … We just try to make it a weekend to create memories and put the pieces in place so that they can fall together. We wanted to do all of that in our backyard here in Utah.

SLUG: Any after-parties?
Carrick: Yeah, we have a pond yacht/DJ after-party this year for the campers. This is an all-day event.

SLUG: I had all these wonderful moments of Zen last year when I was outside of my tent hearing all the bands, woodland creatures, rivers and such. Did you have any moments like that?
Carrick: Yeah. The first night of last year’s festival with the lasers bouncing off the mountains; the music—everything came together so perfectly. Hopefully this year, I get a few more moments to take it all in.

SLUG: So last year the showers were a huge hit for the campers. Any new amenities being added this year?
Carrick: We’re bringing in more showers, actually, and bringing in the after-party element with the pond yacht so the experience lasts throughout.

SLUG: And yoga?
Carrick: Yes! We definitely are bringing that back.

SLUG: And local artists?
Carrick: Of course. We wanted that to be the focus this time around. We’ll have booths and live painters that will create [on the festival grounds] while music is played.

SLUG: My son is excited to come this year. Is there an age limit to this event?
Carrick: It’s 8 and up, and as you saw last year, the family element is a big part of the festival.

So it’s Bonanza Festival, all you Utah festival culture people, and it happens June 23–25 in Heber City. You can camp, you can visit for the day and you can even fish—it’s all about you. This year, Bonanza has even added four-person bungalows for the less outdoor-inclined. Hope to see you there.