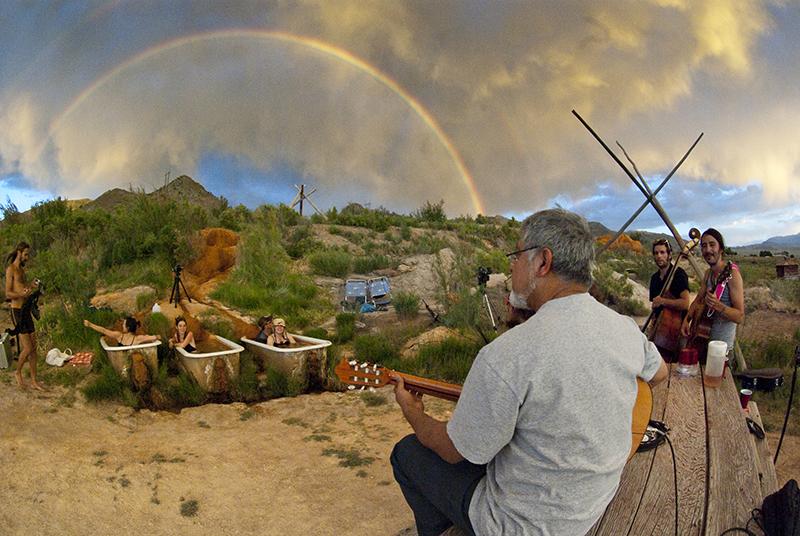 “Mystic” Mike Ginsburg steadily prepares the main stage for his upcoming Mystic Hot Springs Music Festival, which takes place July 23 through 26 at Mystic Hot Springs in Monroe, Utah. A gaggle of geese watch him with apprehensive eyes; Mystic Hot Springs guests splosh in their bathtubs as they cool themselves from the overhead sun; old Deadhead busses sit quietly as weeds overtake their steel axles.

From an early age, Ginsburg, a Denver native, was enthralled with music and the idea of self-sustainability. These two interests led him to the Grateful Dead. Throughout the earlier stages of his life, he traveled in a bus, following the band. One day 19 years ago, as he was returning from a Dead show in Las Vegas, his van broke down just outside of Monroe, Utah. “I was driving home, going past St. George, and my tire blew out,” Ginsburg says. “Then after that was fixed, my engine broke down and we were right next to this little red dot on the map I’d never seen before.” Ginsburg immediately fell in love with the property. Within the same week, he bought the springs, and two months later, he quit his job and moved his family.

When Ginsburg took over the 150-acre estate, there was an overwhelming amount of work to be done. Trucks full of locals would come in the dead of night, drinking and completely ransacking the property. Old appliances sat peacefully, sunbathing in the surrounding fields, and late–19th Century cabins—whose wood bears memories of pioneer times past—leaned more and more to one side each day. Since his arrival, Ginsburg has added a greenhouse—which utilizes steam from the naturally occurring geothermal waters—repur

posed bathtubs for soaking, and refurbished Grateful Dead busses and old cabins—which are now rented out for guests. The once discarded bathtubs were found slowly eroding on his property, while the buses are a mix between a collection from his travels and Craigslist purchases. Ginsburg is also installing passive solar energy cabins, using large windows, heat-absorbing rocks and geographical placement. “When I first started this project, I thought people from all over would help me,” says Ginsburg. “Everything I’ve done here has been on my own.”

These changes have not been cheap, and Ginsburg has realized that he needed an alternative source of income. “My father always taught me two things about business,” says Ginsburg. “One, never invest more capital than you have, and two, never get emotionally attached. I’ve done both here.” Combining his love of music, traveling and the springs, Ginsburg decided that the best way he could sustain himself was through a music festival.

This is the first year of the Mystic Hot Springs Music Festival. There is one main stage and smaller acoustic stages that will be scattered throughout the springs. Artists adept in glass blowing, wood carving and painting will create works onsite. Local and national figures will also be in attendance to give workshops on sustainable businesses, tai chi, yoga and permaculture. Visitors can lodge in the busses and cabins, and can also camp with their own trailers and tents.

Many of the festival’s headliners, such as Hot Buttered Rum, Animal Liberation Orchestra and Head for the Hills, have already played at Ginsburg’s property to audiences that range anywhere from just him to a couple hundred people. Ginsburg’s YouTube channel has over 1,000 concert videos and about 1 million views—all recorded and shot in his small onsite living room. The festival is centered around enjoying music, enjoying one another’s company and enjoying oneself. Ginsburg wants to be able to give an experience that will impact lives. The acts at the Mystic Festival, as well as the workshops and artists, are all handpicked. All of these forces converge together to make a grand, cohesive event that is applicable to a wide variety of people.

Ginsburg stands tall as he poses for a picture between his once-new Deadhead bus and Nissan Leaf. He makes a comment about the contrast of his visible evolution. His demeanor is soft and subtle, yet there is a driving force that can be easily misunderstood at first glance. “Out here, there are no distractions,” he says. “The work and silence either free you or crush you.” Through his evolution and having to face himself, Ginsburg has learned a lot. “I just feel that I have gotten to the point where I can start teaching,” he says. “Being out here, you figure out how to listen and learn. Now I want to share that.” His knowledge, whether it will be in gardening, music, film or business, coupled with his understanding and patience, are grand things to share. “Whether 10 or 5,000 people come,” Ginsburg says, “either way, I’m going to have fun.”