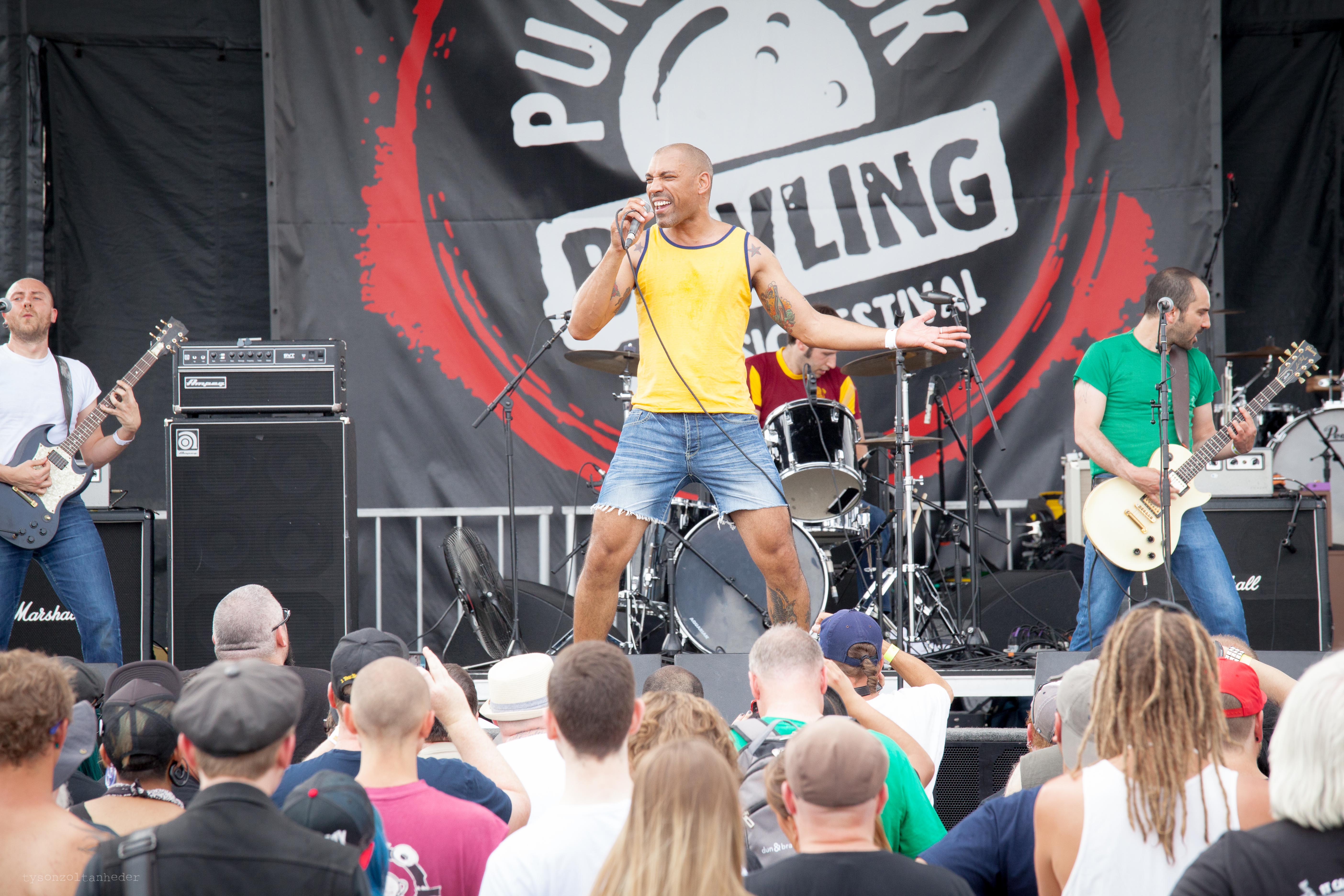 If one were to choose to walk through the layered depths of the punk rock community, they should strive to find themselves wallowing in the heat of the Punk Rock Bowling Festival. The festival is held on a parking lot adjacent to Fremont, and its largely open space lacks cover from the blistering heat of the sun. One can always purchase a $2 water to stay hydrated, although I’d wager that more money is probably spent on pints and whiskey cokes. The festival attendees are as diverse as the variety of punky hair colors, though there is the fascinating commonality of wearing all black, as if to tempt the wrath of heat exhaustion. The unforgiving heat aside, this gathering serves to inspire community and camaraderie under the banner of all things punk rock. The festival is a space where one can feel at home and comfortable while surrounded by those who celebrate the varied degrees of a storied subculture. Here, one can get all the applicable accessories from clothing, pins, hats and rare records from stalls like that of Anaheim, California’s Radiation Records.  Unlike years past which have been largely apolitical, this year’s Punk Rock Bowling has an unofficial theme of denouncing Republican presidential nominee Donald J. Trump—a sentiment that is easy and popular to get behind.

Youth Brigade blasted off with a commendable ferocity. They drew in a large and dedicated audience. Their numbers, like “Modest Proposal” and “Believe in Something,” are driven by high-energy and are clear indications that this a band to dig. During the performance, Shawn Stern made a crack: “I love Jello (Biafra). He’s great, but sometimes he talks too much.” If one looked carefully, one could see Biafra on the side of the stage, and it’s obvious that the comment was taken in good humor. The set was solid, and Stern imparted words of wisdom highlighting the importance of change, via grassroots action by the festival attendees. At the conclusion of Youth Brigade’s set, the band invited the audience to join them onstage for the last number, on the condition that no one stage dives—of course, a couple thrill-seekers do.

The Bronx are a group that I’ve heard only by their reputation, which is both positive and negative—as well as a degree of tempered amusement of their Mariachi side. Upon witnessing the devastating nature of their material, it is a wonder that one can survive such an assault. Vocalist Matt Caughthran espoused sentiments of unity, saying, “Where all the punk rockers at? It’s our time!”

Subhumans are a band that requires almost no introduction. They represent only the purest, most legitimate of politically charged punk rock. The Subhumans are humble and yet totally abrasive, like a knife that cuts through any and all false pretentions. Their set was totally captivating, and their songs forever relevant. They play anthems decrying apathy and complacency like “Apathy,” “No” and a personal favorite, “Mickey Mouse Is Dead.” Bearing witness to these charged sermons is like being bathed in a light of reason that should invoke the anger of the young, old and damned.  These protest songs, although outright and raw, are indeed subversive. This became all the more evident as punks of all creeds bopped their heads, raised their fists and bellowed out hit after hit.

The Exploited are a group that had my attention when I was a younger lad full of piss and vinegar. Years later, at this year’s festival, they are still a group that manages to produce a sound marked by a raw, unbridled nature—or that could be vocalist Wattie Buchan’s gargling, marbles in-mouth vocals. Only when he speaks in between sets does his thick Scottish accent become apparent. Otherwise, it’s Chris Nolan’s punky Batman complete with a Mohawk singing catchy songs about “Sex and Violence” and “Punk’s Not Dead.”