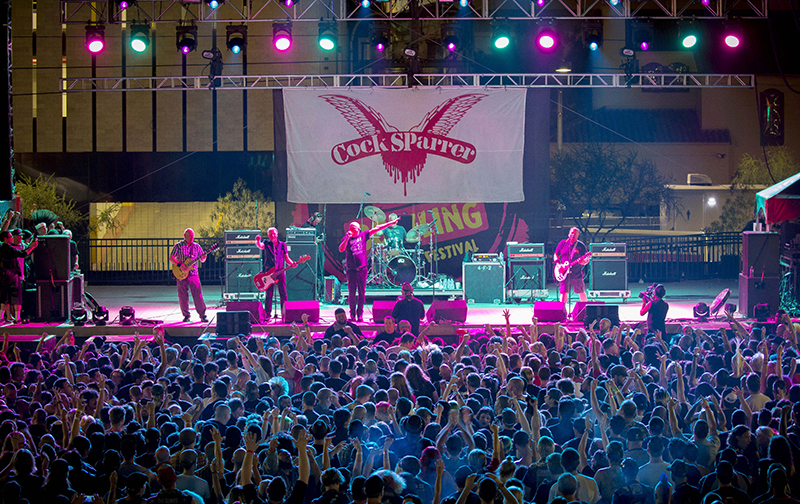 Punk Rock Bowling: where everyone who attends is decked out in studs, leather and bristles. Here they come to congregate for a weekend of music-inspired debauchery.  This festival attracts punk from across the globe, which includes the infamous Turbojugend, street punks, crusties, ageing rock n’ rollers, weekend warriors and everyone in between. Within the confines of the festival itself, paychecks and pocket money are spent at booths catering to all subcultural needs and wants—whether it be records from Tang or Radiation, pins and clothes or radical literature from PM Press or thisisindecline.com. There were also food trucks and drink stalls, where, for an arm and a leg, one can stay drunk, fed or hydrated depending on levels of sobriety and motivation.

The Interrupters are always a good act to catch. They blend a sort of Rancid-inspired reggae punk rock with two-tone sensibilities, but in the third-wave ska style. It’s something that reminds me of The Selector meets No Doubt or The Toasters.  Songs like “Take Back the Power,” “She Got Arrested” and their cover of Operation Ivy’s “Sound System” are infectiously catchy and pop-driven. During their set, The Interrupters take time to make a declaration that punk is an all-inclusive party that decries racism—it’s a notion that is well-received by their audience.

The Spits burst onto the stage with a shocking sound. It’s a style that blends elements of post-punk oppression into the vibrancy of electro-punk. Having been previously subjected only to their records, catching them live is a real treat. They play tunes like “Shitty World” and “Nuclear Bomb.” During their set, videos put together by Indecline play on the screen adjacent to the stage. The first is a video of the iconic naked Trump bust being assembled. The other shows individuals having tourniquets being wrapped around their arms before a needle is inserted into their veins to draw blood.  The vivid depiction of blood being drawn, bottled up and then used for a mural is a little too much for me. Combined with the Spits and Ramones–style furious energy, the electrified punk rock drained the blood from my face. Such a display leaves me a bit faint with a desperate need to sit down away from the excitement.

OFF! seem to consistently play this festival and are never a disappointment. They always start off with a thunderous bang that shakes the foundation of the festival. This band has the one and only Keith Morris at the controls, so anyone who loves early 1980s-style hardcore knows what to expect. OFF! are absolutely awesome and devastating. Their fury invokes a love for the other bands Morris has played in, evoking Black Flag and The Circle Jerks.

As always, Morris is unapologetically political—despite some perceived displeasure from his fellow band members. During Off!’s set, Morris takes a moment to announce his big first day’s plans as President of the United States—if only. He suggests on Day One that he would round up the political ruling class—the Clintons, Trumps and Bushes—and eliminate them through a burial in the desert of the Piute reservation.  After this tirade, Off! continues on with “Borrow and Bomb,” a song about the U.S. spending money to kill foreigners instead of investing it into the nation’s infrastructure.

After enduring the ultimate cover band, Me First and the Gimme Gimmes, the long-awaited performance of Iggy Pop arrives. Without any announcement, Pop—shirtless and in tight pants—starts the set with “I Wanna Be Your Dog.” This song easily excites the crowd. Pop, who is now 70, struts across the stage like he did back in the ‘60s and ‘70s. He is still provocative and wild.  It’s as though he is unaffected by age. Pop plays through a ring of classics—“Gimme Danger,” “The Passenger,” “Lust For Life,” “Some Weird Sin” and others—to a captivated audience.

Pop lives up to his iconic status of playing anthems for the outcasts and weirdos of society. This is a set that leaves no doubt that Pop is alive, well and truly defiant as one of rock n’ roll’s last true rebels.  He appears genuinely happy to be playing at Punk Rock Bowling. During a quick breather, Pop warns his audience to “Never believe what I say because I might fucking do anything.” It’s a statement that one had better believe. Toward the end of his set, he plays a cover of Jerry Lewis’ “Wild One” and encores with “1969.” After concluding, he leaves the stage with a huge smile while waving goodbye to his audience.

The Dickies are a band worth seeing at any given chance. This group comes from the first wave of punk. They are the original merry tricksters. Armed with props like a cock-and-balls sock puppet, blow-up doll and snorkel, The Dickies are set to take the piss out of the crowd. They play hits like “Waterslide” and “Manny, Moe and Jack.” The vocalist doesn’t appear to have a serious side as he eggs on his punk audience by denigrating the genre. “I listen to Hall and Oates and shit,” he says, adding “Bad Religion—what a fucking square.” Later in the set, he stops the performance to demand a hug from the bass player. After the bass player finally relents, the vocalist says. “You know what this means, Eddie. You’re my bitch.”

Choking Victim are legends in their own right. These guys invented the crack rock genre—a style that blends elements of ska and rock with harsh, whiskey-soaked vocals and anthems about drugs, anti-establishment themes and squats.  The beginning of their set is plagued by the constant need to retune.  As they progress, their performance gets tighter and sets a tone for being upbeat. They knock out hits such as “Fucked Reality,” “Born to Die,” “Apple Pie and Police State” and, of course, their signature “Crack Rock Steady.” It’s catchy, harsh and delightfully deadly.

Fidlar are a group that I’ve only heard about. They have come up pretty quickly and are the second to last band playing tonight. These guys are certainly unique. They bring to Punk Rock Bowling a style of garage rock that reminds me a bit of The Black Lips, but with the melodic fury of punk. Fidlar also stand out with a show of inclusiveness: During a brief break in the set, vocalist Zac Carper says, “Too much dick on the dance floor, girl mosh pit!” Despite inaccurately implying that genitalia defines gender, the statement didn’t seem to be coming from a place of trans-exclusion, but to communicate that cis-men were to make space for others. Fidlar seem to inspire ideas of inclusivity into the scene for folks would are usually placed on the sidelines. Plus, they have a command of the stage that is awesome.

Bad Religion start out with “Original Jesus” and “SuperSonic.” This California pop-punk band brings to the table a well-known, socially conscious arsenal of wailing riffs and machine-gun-fire drum beats. They play three songs back to back, and when they stop for a breather, it feels as though it serves as a sudden build up to “Stranger Than Fiction.”  Vocalist Greg Graffin takes time in between songs to suggest that their 40 years of lyrical content has been prolific in anticipating the world’s current string of dire crises. With this in mind, they play songs like “Conquer the World,” “21st Century Digital Boy” and “I Can’t Believe It” to make their point.

Discharge have gone through lineup changes, but they always come back with brutality. Their set opens with a recording that warns of imminent destruction. It’s kind of eerie and foreboding. This happens during Indecline’s video depicting sabotage and subterfuge.  Discharge start off with charged razor riffs that infuse into a minimalist, D-beat, street punk style. Their vocalist, Jeff “J.J” Janiak, maintains an impressive presence on stage. As he growls out songs like “Hatebomb” and “The Nightmare Continues,” Janiak prowls the stage as if looking for prey. It’s a pretty impressive act, although such constant raw and primitive delivery can be a bit repetitive.

The Adicts have never failed to give their audience one hell of a show. Their set starts out with the intro theme from Stanley Kubricks‘ A Clockwork Orange. They appear onstage, dressed head to toe in droog-inspired clothing, with the exception of vocalist Monkey. He appears as the merry joker, aka the dark prince of crime. These glam punks kick things off with “Joker In The Pack.” During the set, Monkey throw playing cards into the audience. The Adicts continue their set with their songs, which highlight individuality and rebellion through hope and positivity. Playing with a stunning spectacle of theatrics, they blast through “Tango,” “Horrorshow,” Steamroller” and “Viva La Revolution.” During the set, Monkey slowly takes his costume off to the point where he is shirtless. The Adicts conclude with “Walk On,” much to the joy of the gathered audience.

Just before Cock Sparrer are set to conclude Punk Rock Bowling 2017, a man-sized package is hoisted onto the stage. After several moments, the packaging is removed, revealing the naked The Emperor has no balls Donald J. Trump statue. Fat Mike of NOFX declares to the assembled audience that punk is about politics, and, “If you are a Trump supporter, fuck you. Get the fuck out of our scene.” This sentiment is well-received. This is followed by PRB founder Mark Stern’s daughter taking the first whack at the bust with a baseball bat. The statue’s sculpted penis goes flying. Fat Mike then decapitates the statue as fellow punkers rush to join in to beat the statue with baseball bats. Stern then announces, “If you don’t like what’s happening in this country, it’s up to you to change it.”

After the excitement, the Cock Sparrer banner is raised on the stage as an instrumental piano tune plays over the speakers. They kick off their set with “Riot Squad,” followed by “Watch Your Back.” These songs are easy to sing along to, which everyone packed in front of the stage seems to do. This is Cock Sparrer’s third time in Las Vegas. Vocalist Colin McFaull speaks of being older, saying, “How’s it feel to be your age and still fucking doing it?” He then announces the release of Cock Sparrer’s new album, Forever. They blast through more songs, such as “Teenage Heart,” and several others from the new record. These new songs fall perfectly in line with their previous material. It’s a style that blends punk and oil, remaining steadfast in its working-class relevance. It’s cleverly honest.

During the latter half of the set, McFaull takes time to honor the armed forces and the entire Punk Rock Bowling staff—from stage crew to janitors. He even cheekily points out that they’ll be cleaning up after everyone after all the punks have left the festival. Cock Sparrer close out with a string of favorites: “Hey You,” “Argy Bargy,” “ I Got Your Number,” Where Are They Now” and “Take ‘Em All.” They encore with “England Belongs To Me” and “We’re Coming Back.” It’s a breathtaking set, and I can’t help but leave Punk Rock Bowling with a slight spring in my step.