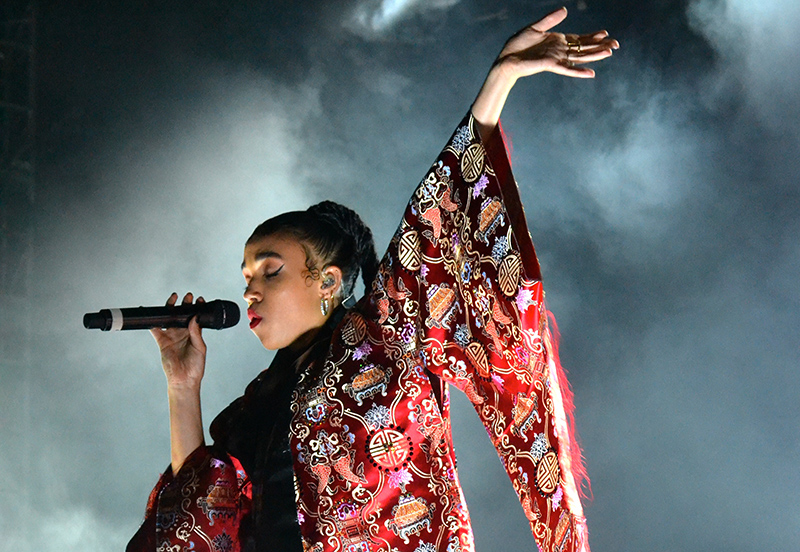 FYF Fest 2015 Day Two was hotter and more crowded than ever, but the highly anticipated and top-notch Sunday lineup kept the momentum going, starting the day off with King Gizzard & the Lizard Wizard’s garage band tunes, Unknown Mortal Orchestra’s jangly melodies and folk punkers Andrew Jackson Jihad, before going on to widely attended performances by Flume, Toro Y Moi and Mac DeMarco. DJs spun dance parties at The Arena and The Woods stages, while The Trees stage brought California-based bands Health and Thee Oh Sees. As FYF continues to grow, founder Sean Carlson kept logistical issues to a minimum for the festival’s second year at the LA Memorial Coliseum and Exposition Park (major complaints from last year’s festival included long wait times and exhausting treks between stages). Festival-goers could take advantage of plenty of artist meet-and-greets and photo ops, make crafts, browse through a handpicked selection of vendors, and peruse the plentiful food offerings, which included a dubstep-blasting poutine truck, cold-pressed juices and ice cream–stuffed donuts. Of course, FYF Fest 2015 is all about the music, and Day Two boasted some of my favorite performances of this year—and all time:

Spiritualized’s show was the only one that I saw at the Arena Stage, a dark indoor venue that offered a sprawling floor level as well as 360-degree seating on the level above. Navigating the arena and its lines was one of the most frustrating logistical aspects of the festival, but upon entering the arena—which meant going through a smoke-filled, neon-lit lobby that reminded of a roller rink on ’80s night—it all made sense. The stage had large string lights hung up with a massive laser light show and dozens of disco balls hanging on the ceiling—with one large one in the center, spinning lights throughout the arena—creating an entrancing and psychedelic visualization for Spiritualized’s pulsating and densely layered melodies. The band coursed through their neo-psychedelic space rock, ending their set with “Come Together” and pounding drums, dense distortion, droning bass and blinding lights. With the stage, the smoke, the background singers and the music, the entire experience emulated a sort of megachurch feel as the audience members—whether they were crowded onto the floor or packed into the seats—swayed along, mesmerized. Solange’s much-anticipated set ran into some significant technical difficulties, prompting cheers, chants and jeers from the audience as 20 minutes of Solange’s already abbreviated set ticked by due to the sound issues. As soon as Solange took the stage, however—dressed gloriously in a flowing red caftan—the audience went wild as she and her band launched into some sticky, grooving ’80s-pop jams. Unfortunately, Solange continued to run into issues with her earpiece—eventually taking it out—and was clearly frustrated, and honest about it. “Some things never seem to fucking work,” she said, and later on, in light of the sound issues, she reached into her dress and tossed her bra aside, declaring, “I gotta free the nipple. All right, let’s dance!” By then, Solange had gotten back into her groove with the appreciative and forgiving audience, bringing singer Moses Sumney, producer Dev Hynes (Blood Orange) and soul trio KING for a smooth rendition of Nina Simone’s “To Be Young, Gifted and Black.” Live, Solange’s music had a surprising depth that is less apparent in her recordings, which tout a luxe simplicity—and as the singer danced and moved her way across the stage performing her saccharine hit single, “Losing You,” she brought plenty of warmth and goodness to go around.

D’Angelo and The Vanguard – Lawn Stage D’Angelo and The Vanguard were all show and all soul for their 75-minute set, ready to thrill and woo audiences with a spell of lively funk and R&B jams. As The Vanguard began to play the thick introductory rhythm to “Ain’t That Easy,” the first track from Black Messiah, the funkmaster himself made his way from the back of the stage with his guitar, grinning mischievously in a wide-brimmed hat and a holey black trenchcoat. D’Angelo turned his back to the audience, grooving along to cheers—after a pause, he raised his hand, making a part-beckoning, part–“if you dare” motion with his hand. When the audience gave an acceptable roar, D’Angelo spun around to start the revelry as bandleader, going on to ask us what we thought about his new band; jiving through a guitar duet with his bejeweled guitar–toting lead guitarist, Jesse Johnson; changing into a black poncho as Isaiah Sharkey grooved through the acoustic solo of “Spanish Joint”; and bringing every single audience member to raise their fist in remembrance of police brutality victims, starting up the “Hands up! Don’t shoot!” chant (“The Charade”). The set ended with an extended jam session of “Sugah Daddy,” and D’Angelo, in true bandleader fashion, made sure to extend out the instrumental interludes, snare solos, sweet-as-sugar vocals and back-and-forths between his shouts and heavy downbeats. The Vanguard kept the audience on their toes and moving until D’Angelo’s signaled the final downbeat, yelling a hasty “Have a good night!” as the stage went black.

Sunday night’s headlining set kicked off in true Morrissey fashion with a performance of The Smiths’ 1986 single, “The Queen is Dead,” set in front of a giant screen blaring an image of Queen Elizabeth flashing the bird and a tabloid-style headline reading “United King-Dumb.” Moz made sure to make more than a few comments to his audience, including a nod to his Mexican and Mexican-American followings—“Thank you for having the cojones for standing here so long”—and vivid, graphic footage of police brutality during his performance of the acerbic “Ganglord.” As the ambling intro to “I’m Throwing My Arms Around Paris” began, Morrissey abruptly stopped the song, commenting (a bit curmudgeonly), “Why so much security? Can at least 50 of you go away?” before starting the song over. Moz continued on to fend off an audience member who managed to get onstage to try and wrap her arms around the artist, sing the anthemic “Meat is Murder” with the lyrics “KFC is murder,” implore the audience against the possibility of a President Trump and end his 90-minute set with a resonant rendition of The Smiths’ “What She Said” to the massive and starstruck crowd. Just as I expected, FKA twigs—the final act of the festival—gave the most creative and cutting-edge performance of the festival, hitting fans with a smoke-, bass- and strobe light–heavy preface and before arriving onstage in a red embroidered kimono. twigs—Tahliah Debrett Barnett—was a vision onstage, driving the crowd into a frenzy with a single look, dominating the stage as her seductive voice crooned and purred exquisitely into the mic, blending perfectly into the instrumentals. The lighting did well to give Barnett center stage, who went from playing a few of her hits—“Water Me” and “Video Girl”—to throwing down into the recently released “Figure 8.” twigs moves from dance to song and back, often joined onstage by one or two male dancers who lift, twirl and complement her lyrical contemporary choreography, which is sometimes alien, sometimes animal and other times distinctly, and challengingly, human. As usual, twigs is at the center of our attention, commanding and bewitching us into her fervent and ethereal performance, leaving us stunned yet entranced, exhausted yet energized as we slowly shuffled our way out of the festival.

FYF Fest 2015 took place at the Los Angeles Exposition Park and Coliseum on Aug. 22–23. For more information about the festival, visit fyffest.com.