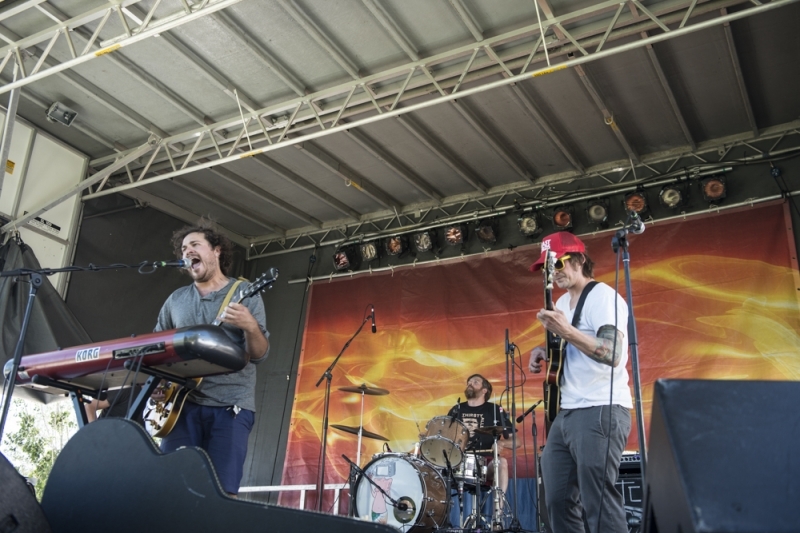 This year’s Utah Arts Festival was rad!!! No, it really was. After skipping out on the last few years to do absolutely nothing I finally decided to check it out again when the opportunity came up for this assignment. What was really impressive was the amount of entertainment available that didn’t require me to spend a small fortune buying pretty things for my apartment. Aside from music, the 6+ stages offered everything from local comedy shows to beatboxing to children’s theatre. Meanwhile, the Park Stage offered a wide variety of local music throughout the entire day and made for the perfect Sunday afternoon in the summer heat.

The first group I managed to catch on the Park Stage on Sunday was Zodiac Empire, a Salt Lake based pop group consisting of Ransom Wydner, Stephanie Webb, Eric Stoye and Camden Chamberlain. As the group began, I couldn’t help but compare them to the now-famous Provo group Neon Trees. Combining pop elements with electronic dance tracks yet keeping an indie vibe, the band had a really original and upbeat sound that attracted onlookers from afar as they bounced and jumped onstage. I couldn’t help but wonder why the group was on so early, since they obviously were meant to be the life of the party that wouldn’t really get started until later that day. The lead singer announced that the group has upcoming shows at The Shred Shed and Urban Lounge August first and second, respectively, for their Lindsay Heath album release party. Upon a little more investigation with the help of Google, I find that the band just finished recording their debut album in Los Angeles this spring and will be announcing a tour soon. For now, their music can be found at zodiacempire.bandcamp.com.

In terms of “hipster bands,” this next one provides the perfect example. The next group on the bill was a local indie-rock group called Watches. The group took the stage looking oddly similar to Wavves, yet had a much different sound. Their music is similar to the traditional rock sounds of the 1960s and is reminiscent of the early works of the Beatles (I talk about that time period as if I lived through it myself). It was a great soundtrack to sitting in the grass in the afternoon sun and showed that although the stage was a party just an hour before during Zodiac Empire, Salt Lake had an extremely wide variety of music to offer. The four-person band played what I call “festival rock,” and demonstrated awesome guitar solos throughout their show while having great stage energy throughout. The group recently released a self-titled EP that can be found at watchesmusic.com⎯believe me, you don’t want to Google this stuff (easily searchable names make my heart sing). From there the band can be found on just about every social media site available, and although the group doesn’t have any upcoming shows right now, their website has the information readily available.

Smooth Jazz style saxophone paired with deep, breathy male vocals and rock anthem style guitar was provided next from local band Sons of Ian. It was along the lines of bands like Hinder and Nickleback (I mean that in the best way, I really do) and, like the group just before them, were a good compliment to the late afternoon sun and once you parked yourself under some shade the summer heat was actually quite enjoyable at that point. Their stage presence was relaxed, which went well with their style of music as the sun began to set to the sound of all American indie rock. The vocals were those deep, bluesy masculine growls that would make any southern belle swoon. Though the band doesn’t have any upcoming shows (though their website says they may be playing at this years Stadium of Fire⎯Provo’s annual Fourth of July extravaganza), they can be found playing local bars and pubs such as The Green Pig and The Hog Wallow Pub quite often. Links to their music, as well as more information about the band and upcoming shows can be found at sonofian.net.

Later was a local hip-hop and reggae influenced group called The Green Leefs that played a mix of all original music and Sublime covers as the crowd thickened for the last day of the Arts Festival. Attracting both old and new listeners, the nine-person band took the stage with great energy. The group blends nineties influenced hip-hop with occasional female R&B vocals and combines jazz and reggae sounds to make a sound that’s exactly what Salt Lake’s self proclaimed hippie population loves to hear. The sounds were relaxing, as were most of the other bands, yet made for an enjoyable time nonetheless. After checking out their music again later on, I feel I should be sitting on some Caribbean beach smoking a doobie (is that the word for it?) as I work on my tan. The Green Leefs play often at local bars and clubs like Lo-Fi Café and The Complex. Information on upcoming shows and music downloads can be found at reverbnation.com/thegreenleefs.

The final act for the night was a Michigan and Australia based blues and rock band Harper & Midwest Kind. By this time the park stage was busy as ever and dancing energetically to the slow, bluesy rock sounds accompanied by a didgeridoo. This particular combination of instruments is unlike any other I’ve heard in the past, and the stage energy from the band was lively and exciting. To close the festival at the park stage, this group was a good choice and left the festival to end on a lively note, with the entire crowd up and dancing, throwing poi (the LED raver kind, not actual fire), and drunkenly cheering along with the music. Harper & Midwest Kind are currently on an extensive tour around the country with stops at various music and art festivals in the Northwest and Canada over the rest of the summer. Links to download their music, learn more about the eclectic groups background story, and show dates can be found at reverbnation.com/harperandmidwestkind or harper.biz.