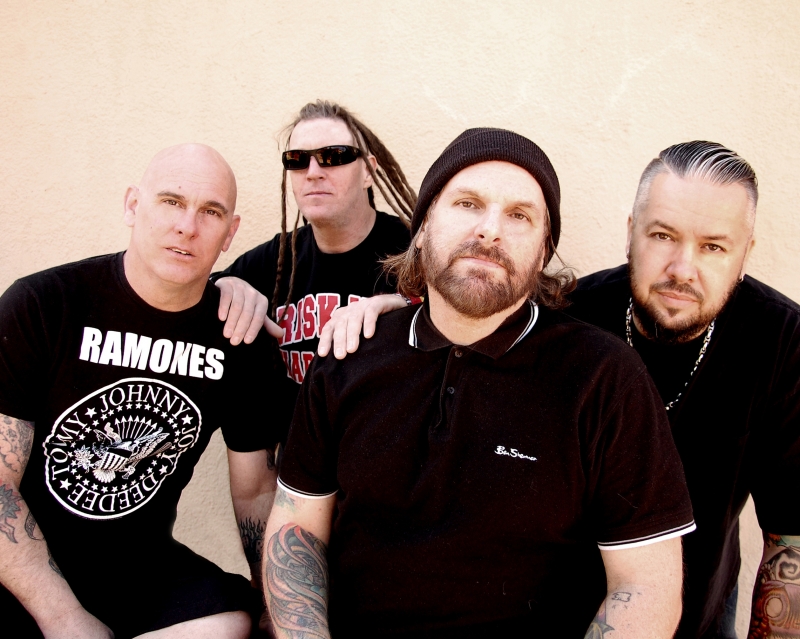 7 Seconds kicked right into “Still Believe,” and the pit exploded! It was complete madness, with a circle pit, slam dancing and mic grabs—a brawl even broke out between two crazed fans. Seconds expressed that we were pretty badass for a bunch of Mormons. Photo: David Roberts

As I walked into Club Sound 45 minutes after doors opened, the first thing I noticed was how few people had shown up to the show so far. There were about 35 people in all, and about half were already in the bar getting their buzz on before the headliner played. Being that the crowd was small and concerned with saving their energy for the main act, there was going to be no moshing whatsoever for this opening band, and judging by the lead singer’s Blink-182 shirt, I was certain it would be somewhat of a pop punk band that wouldn’t require much dancing. They were Blinded By Truth, and they held their own as far as sound went. As I expected, they had a pop punk sound, mostly thanks to lead singer Vincent Michael Bryant’s vocals, but it was the type of pop punk whose saving grace is their drummer. Reminiscent of bands like New Found Glory and Bayside, Mitch Guymon’s explosive drumming breathed life into what would otherwise be a lackluster set.

After their set, more people gradually funneled into the venue as well as out of the bar and onto the dance floor, edging ever so slightly toward the stage. The next band, Resistor Radio actually got the people moving—considering they were a ska band, it wasn’t hard for members of the crowd (myself included) to start getting their skank on. Other than the upbeat ska rhythms, they had a very laid-back stage presence. Their mellow demeanor was the quiet before the storm that were The Copyrights. They were the most explosive band that had played thus far. The springy bassist/vocalist Adam Fletcher was full of energy, and it was extremely enjoyable watching drummer Luke McNeill snarl at the audience while keeping a consistent, powerful rhythm. Their set was also virtually nonstop—they only stopped in between songs to catch their breath as McNeill gave the 4-count on his cymbal to start the next song.

After The Copyrights, my friend came up to me and asked if I had a sharpie. I asked him why, and he pointed to the West side of the venue—there, sitting with stack of guitar and drum cases was Kevin Seconds. My friend scrambled to the merch booth to borrow a sharpie and we approached Seconds. I whipped out my phone and my wallet and pulled out a sticker that I had purchased earlier and asked him if I could get his signature and a picture. Seconds’ face lit up with the biggest smile—“Sure you can dude, here you go.” I hadn’t been so awestruck since I met Keith Morris when OFF! played the Loading Dock back in April. I shook his hand and thanked him, not just for the signature and picture, but for being the driving force behind one of the most inspirational and pivotal punk bands, for still playing shows to younger crowds, like myself, who had not seen them, and giving me the opportunity to actually meet him. I didn’t say all that, but I’m sure he knew that my ‘thank you’ was for all of it.

Pretty soon, he took the stage with the other three members of 7 Seconds—“Everybody come pile up front!” he shouted to the crowd, “let’s go wild and have some fun.” That said, they kicked right into “Still Believe,” and the pit exploded! It was complete madness, with a circle pit, slam dancing and mic grabs—a brawl even broke out between two crazed fans. Seconds expressed that we were pretty badass for a bunch of Mormons. We all had a good laugh and kept on going. All I could think to myself in the midst of all the rowdiness was the surrealism of the situation—here I am, face-to-face with Kevin Seconds shouting the classic chants of “Not Just Boys Fun,” “We’re Gonna Fight” and “The Crew”—I made sure that I took it all in. While their set list was packed with older songs, they fit in a good selection of brand new tracks like “Exceptional,” “I Have Faith In You” and “Your Hate Mentality.” They even threw in a cover of Sham 69’s “If The Kids Are United.” Since their discography spans over thirty years, they managed to even out all the tracks quite nicely—each one getting a boisterous reaction from the crowd.

Between each of the songs—old and new—Seconds had nothing but nice things to say—he spoke about how honored they were to tour with The Copyrights, who, as it turns out, are Seconds’ favorite band. He also reminisced on the time they played a show in SLC with brother band D.O.A. One fan shouted, “I was there!” only to get the reply, “No, you were not! You’re too young! Look at this twenty-five year old trying to say he was at that show!” The guy got up to the stage, grabbed ahold of Seconds’ hand, and they exchanged their gratitude for one another. Ever so prominent was the interaction with the crowd—Seconds really knew how to keep the crowd excited, and if it wasn’t through his onstage banter, the excitement reached overflowing levels when they played “Young Until I Die” and combined it with a rendition of Minor Threat’s “Minor Threat.” I went fucking nuts. I could not miss the opportunity to mosh to one of the first songs that got me into punk—I slammed my way up front, grabbed the mic, and screamed at the top of my lungs, “We’re just a minor threat!” They still kept the energy rolling with “Heads Are Bound To Roll,” “99 Red Balloons,” and closing the set with (fittingly enough) “Walk Together, Rock Together.” Of course, they couldn’t leave on that note—the audience chanted for more, and more they got—they came back to the stage with “Definite Choice,” “My Aim Is True” and “Trust.” The crowd responded with a circle pit in full throttle, hurtling to each side of the venue.

As I watched the audience file out of the venue, I stood around and watched the band mingle with the fans that stuck around to talk with them. I reminded myself that 7 Seconds has been a band consistently for thirty-odd years. They still have the energy to put on a wild live show and find time to talk with the people who brought them here. Looking back, I remember Seconds keeping the audience enthused while on stage, but really, it’s when they all step off the stage and get personal with the audience that the enthusiasm increases tenfold. These guys are legends in their own right, but they obviously have not forgotten their roots.