SLUG Mag Soundwaves
Episode #392 – Homephone
00:00 / 17:29
Spotify Stitcher
RSS Feed
Share
Link
Embed
Every time I walk into the Libby Garner Music Hall, I am taken by just how aesthetically and aurally pleasing it is. The beautiful tone of the wood, and the glorious Lively-Fulcher pipe organ that fills the front of the room leaves you in awe and sets the mood for beautiful, classical music.

A Night of Reverence with the Elias String Quartet 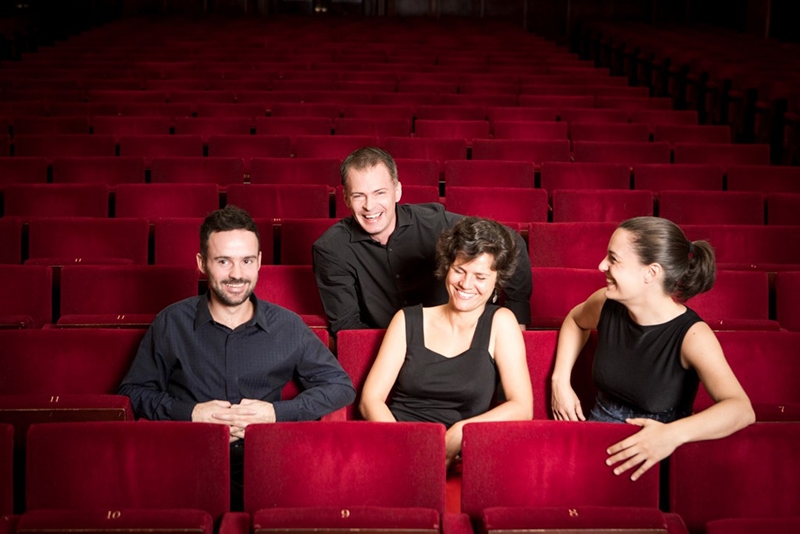 Every time I walk into the Libby Gardner Music Hall, I am taken by just how aesthetically and aurally pleasing it is. The beautiful tone of the wood, and the glorious Lively-Fulcher pipe organ that fills the front of the room leaves you in awe and sets the mood for beautiful, classical music. The Elias String Quartet had an emotional agenda—they had something meaningful on their minds. The music played was not lighthearted but powerful, an emotional tribute played by musicians stricken with grief and horrible tragedy. It was obvious they had heavy hearts. This performance was a dedicated to the passengers and families of the Germanwings Flight 9525 that crashed in the French Alps on March 24.
The first piece played of the evening was the lightest—Haydn’s “Quartet in C Major, Op.33 No. 3” titled “The Bird.” This piece was humorous, playful, energetic and fun. I thought of all the happy travelers who were setting off on their flight for their exciting journeys and business destinations—none of which could predict the fate that was about to come.
The two violinists looked as if they were dancing with each other as they played from their seated positions, their bodies moving together beautifully in sync. To the side of them, another scene was taking place. The viola player and cellist were statuesque while they waited for their parts to be played. I thought this was a very interesting mixture of emotion and stage presence and pondered if it was purposefully done.
The second piece was Benjamin Britten’s “String quartet No. 3 in G minor Op.94” which was also introduced with a mournful lament. The quartet’s second violinist, Donald Gant, told the story of the last piece written by Britten—a story of how a man dying from a failed heart operation had “death on his mind” as he composed. Gant explained how he had personally seen the original manuscript at the Red House in Aldeburgh, United Kingdom and told in detail how you could see the man’s health begin to fail. He described the saddening realities of details like the pressure of Britten’s pen ink becoming lighter and lighter and how he used shortcuts to not tire his arm as much so he had enough energy to finish the piece. I was simply amazed as I heard the story of this man who composed all of the parts for this string quartet as he was passing away. Gant finished the story as it was told to him: “Ben wrote his own death.”
The quartet began to play the piece and it was done with such solace and sadness. The plucking appeared random to me, but the vibrato timing was impeccable. I truly felt the thunder of the cellist—Marie Bitlloch—for the first time in this piece. This must have been the moment she was waiting for—it was as if she came to life. Her facial expressions and body were completely engaged. The first violinist Sara Bitlloch slid her fingers on the strings of her violin and it sung such a beautiful song. The third movement is where the sound of the Viola numbed me. Martin Saving had also sprung to life—he was not as animated as the rest, but was focused on the music. The powerful emotion of sadness overtook me. I was engulfed by the music. I thought of the composer on his death bed writing the piece and the 150 people that had lost their lives on that flight. The artists had accomplished what they set out to do—their grief was translated by their music.
The third piece of the evening was also one that was filled with grief. This was a story of a man whose sister had passed away and he never fully recovered from it. It was Mendelssohn’s “Quartet in F minor Op.80.” It immediately provoked anxiety. The cello was very dominant here as well—it was thunderous, boisterous and demanded your attention. For all of you headbangers out there, this is your piece—it is filled with aggression and was played with such vigor. I also found it interesting that they performed part of the piece with their bows below the bridge of the instruments. This was the first time I had seen this happen during the Chamber events. The sound it produced was a very high, yet a controlled screech or squeak. The piece finished and they received a standing ovation which I felt was well deserved.
There was an encore performance which consisted of two folk tunes which Gant took the lead on. The others just seemed to show back up support with their instruments here as Gant filled the room with his Scottish music heritage. He closed his eyes and the music just flowed out of him. He was proud and it showed in every note. It was almost as if they wanted the evening to end with a little lightheartedness. As they played the tunes, all of their toes began to tap.
The evening was filled with compelling sadness, grief and beauty. The pain of sorrow was felt in every piece. The quartet mourned with grace and beauty. I truly enjoy the Chamber Music Society of Salt Lake City concerts—they are all so beautiful and tell the tales of the centuries with the varied composers and timeless music. If you have not ever gone to a Chamber concert, I recommend that you take your virgin ears down and experience something that is extremely educational, intimate and pleasurable. The opportunity to see these artists is so rare.
Photos: