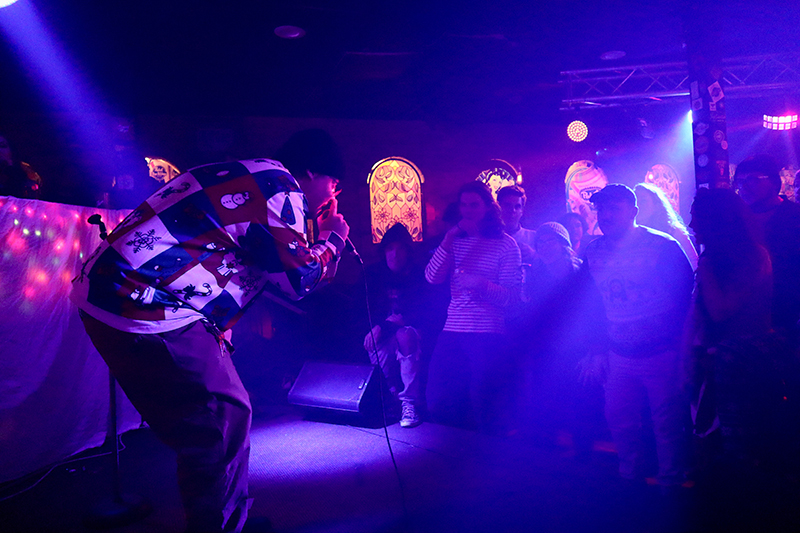 ’Twas Friday the 13th before Christmas, when all through O-town creatures packed Funk ’n Dive to drink and get down. Fluorescent neon lights and ugly holiday sweaters decorated the dark and smokey dive bar. From far and wide, heathens traveled through a brisk December night to pay homage to the spirit of Christmas and local hip hop. Earthworm and Clësh, Ogden’s iconic hip-hop duo, teamed up with Super Young Adult to close out the decade at Funk ’n Dive, hosting a very Ogden Christmas party with what seemed like half of the whole town in attendance.

Earthworm and Clësh have been the face of the Ogden hip-hop scene since 2016, and they’re wrapping up what seems like one of their most successful years yet. With opening slot at shows such as Ghostface Killah and Biz Markie they’ve cultivated a stronger following than ever. Meanwhile, newcomer to the local hip-hop circuit Super Young Adult has dived in headfirst and immediately began causing a stir. This year alone, he has released three full-length albums and an EP. For these three players to come together for one night on stage was the best combination to happen since the peanut butter and jelly sandwich (in my opinion).

“From far and wide, heathens traveled through a brisk December night to pay homage to the spirit of Christmas and local hip hop.”

Both Earthworm and Super Young Adult are consistently killing it with their entertaining Instagram stories. In the weeks leading up to the show, they shared their own awkward family Christmas card sporting the ugliest sweaters they had. Super Young Adult held a March Madness–style bracket of Christmas movies and asked his followers to vote on which one they wanted to see play on stage during the performance. In round one Arnold Schwarzenneger’s Christmas classic Jingle All The Way beat the Star Wars Holiday Special, Drake and Josh Christmas defeated Santa With Muscles in a landslide, and Gremlins won in a neck to neck battle against Home Alone. In the end, despite my own efforts to champion the Drake and Josh Christmas special, Jingle All The Way came out victorious.

Clësh warmed up the funk by spinning magic on his Rane Seventy-Two turntable ornamented with PBR cans. Being that it was a Friday night, you have to imagine that a majority of the crowd probably showed up to the bar having already put a beer or two down themselves. Despite that assumption, it took little to no time for Clësh to open up the dancefloor and get the party popping off the proper way.

The night turned up a few notches when Super Young Adult walked onto stage. It’s the first time I’ve ever seen somebody crowd surf in a dive bar. He brought out a contagiously high amount of energy that bounced around the bar like a pinball machine. He moved constantly from wall to wall; from dance floor to stage, climbing to the top of his amp and only ever coming up for air to hydrate with a cold stein of beer. He ran through his set in a similar manner, weaving through his songs like a medley—playing a verse here, a chorus there and transitioning in and out of full songs effortlessly (except for when Jingle All The Way stopped playing).

“As he cycled through all of his classics, it was easy to remember why Earthworm is the King of Ogden hip-hop.”

It’s easy to see that Super Young Adult is going to be a new crowd favorite. Every eye in the bar stuck to him like glue for as long as they could keep up with him. The audience clung to his every word and sang in unison when they could. The dance floor would occasionally turn into a mosh pit, at which point Super Young Adult would passionately scream his lyrics into the microphone and throw his body around in the pit of all his friends. His antics are crazy, but his music and his performances are genuine.

After that, Clësh steps back onto the stage once again, this time to back up the one and only Earthworm. Before they start he admittedly states of the Super Young Adult set, “How do you follow that?” Then, without hesitation the duo turned it up and brought the heat just the same. Standing up there on stage in his silk Christmas top, Earthworm looked like a straight up “G” in the coolest form imaginable. As he cycled through all of his classics, it was easy to remember why Earthworm is the King of Ogden hip-hop. He flows like gold. He’s as good as, if not better than, most in the game right now. His lyrics are genuine and thoughtful, and he connects to his audience with a casual coolness that requires little to no effort on his part. Much like the Super Young Adult set, the audience clung to his every word and sang at the top of their lungs to all their favorite jams. During his song “Shit Bump” Earthworm brought out a giant inflatable joint for everyone to pass around while they sang the chorus, “This shit bumps / Don’t drop the blunt.” It’s too bad it wasn’t a real one.

“People who knew what they were in for found themselves on cloud nine. Those who had no idea what was going on when they showed up were blown out of the water and couldn’t believe what they had just witnessed.”

Earthworm played his final song of the night then informed the crowd that Donnie Memphis is up next. Thinking it’s a joke, I started packing up my things. But before I know it, all three of them (Super Young Adult, Earthworm and Clësh) are walking back out onto the stage again—they are Donnie Memphis. They performed a handful of new songs that they’ve been working on together behind the scenes, and the energy of the bar hadn’t died out yet. There’s more jumping up and down rallying the crowd and even another round of crowd surfing. They performed some great new tracks that I for one can’t wait for them to release.

Just as the energy was hitting its final peak of the night, that’s it. The trio walked off the stage for good. The room was buzzing. People who knew what they were in for found themselves on cloud nine. Those who had no idea what was going on when they showed up were blown out of the water and couldn’t believe what they had just witnessed. It was the new mob in town: Earthworm, Clësh and Super Young Adult or … Donnie Memphis? May their reign of O-town be long and prosperous. –Paul Michael Zuniga!