Eventually, Bronson did get most of the crowd back on his side. As to be expected, he crushed it, but it was a short set. “Get the fuck outta here / I do this shit straight off the couch,” he boasted, in his thick Queens accent, over a sea of bobbing heads and waving arms. 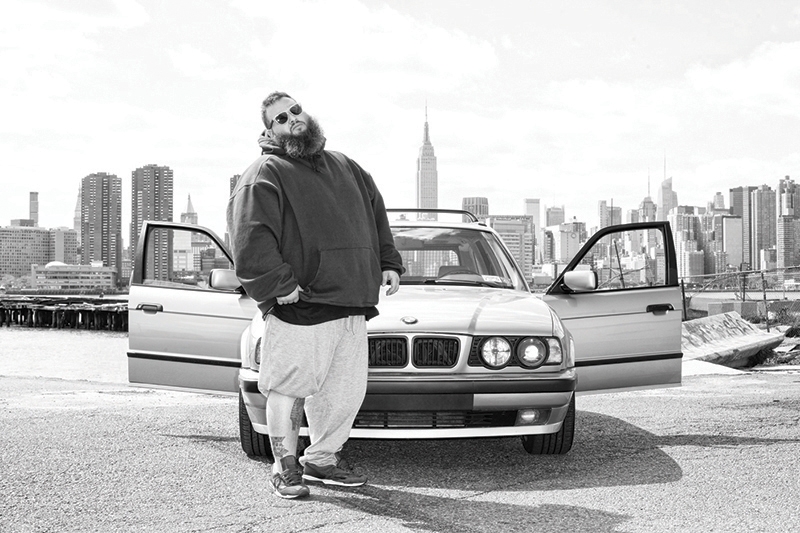 “We need a beatbox!” pleaded one of the guys warming up the crowd. He couldn’t find anyone to volunteer. Eventually, he offered to provide it himself, with some reluctance, and four local emcees got to freestyle. I’m proud to report each one nailed it. The last young man to finish gave a shoutout to his girlfriend: “She’s hot and I love her,” he said out of breath as he giddily bounced off stage.

I couldn’t help but feel the love. This is a great way to engage a hip-hop crowd.

Then, they blew it.

They called up another bunch of kids to freestyle only to immediately kick them off stage again before they even had a chance. Evidently, they got word that the DJ, Party Supplies, was ready to go on. Watching these kids, with slumped shoulders and heads down, dejectedly return to the crowd hurt my heart. They were visibly bummed. The decision to send them packing was both unnecessary and beyond gauche. Especially considering it took another five minutes or so before the DJ decided to drag his ass onstage.

Party Supplies is a thin Williamsburgian hipster (so I’ve read) who wore a red hooded sweatshirt pulled over his mop. He produced the beats on two of Action Bronson’s most critically acclaimed mixtapes: Blue Chips and Blue Chips 2. His beats can be amazing—but I get the distinct feeling that if I ever had to spend ten minutes with the dude, I’d probably have to fight the urge to throw him a beat of my own.

If what I just said sounded a bit harsh, that’s only because you weren’t at the show. What followed was perhaps the most malicious DJ set I’ve ever seen.

Party Supplies started out innocently enough with one of the better-known tracks he did for Action Bronson, then moved into some salsa music he no doubt discovered in a Boricua-owned deli somewhere on South 5th Street in Brooklyn. Right from the beginning it didn’t sit well with the crowd. People were looking at each other like they didn’t understand what was going on. That’s when he decided to play Fleetwood Mac’s “Everywhere” in its entirety. When that didn’t work, he played UB40’s “(I Can’t Help) Falling In Love With You” followed by New Edition’s “Cool It Now” which I’m pretty sure he briefly mixed with Kenny Loggins’ “Footloose” only to return to “Cool it Now.”

Frankly, I was rather enjoying the mix, but the same could not be said for 99–percent of the crowd—who were now clearly irritated. Party Supplies seemed to notice this and decided to double down. He played Slim Whitman’s “Rose Marie” followed by “Everybody Everybody” by Black Box. His whole approach to deejaying seemed to be, “Oh you didn’t like that? Well you’re gonna fucking hate this, cocksucker!”

Then he started playing radio commercials.

At that point, it was clear that Party Supplies was trying to sow discontent in the crowd. For what purpose I do not know, but it was undoubtedly deliberate. I spoke with several concert-goers, all of them expressed essentially the same sentiment: that his taste in music—however on point—was out of place. One young man named Adam was a bit beside himself, “People came here to see high energy music,” he told me with apparent frustration as Vangelis’ “Chariots of Fire” played in the background. My friend Matt was not so kind: “He’s kind of being a prick,” he said with a laugh during “Pump Up the Jam,” by Technotronic. “He’s basically an asshole with good taste in music,” he said. “This guy should change his name to DJ Entitlement.”

I think I understand what Party Supplies was trying to do, but at a certain point it just got aggressive. While I feel everyone should open their minds to all different kinds of music, the crowd’s expectations of hearing hip hop were not unreasonable. There were audible groans over Tchaikovsky as a defiant Party Supplies reclined with his feet up behind the DJ booth and thumbed through what looked like a magazine. When a brief pause between songs happened at the end of Captain and Tennille’s “Do That To Me One More Time,” much of the crowd took the opportunity to begin hurling expletives his way. His response was to play Michael Jackson’s “Black or White” as loud as he possibly could.

The whole scene was absurdly dickish.

By the time Action Bronson took the stage, he was greeted by a weary crowd. Had I been in his position I might have been pissed, but Bam Bam (as he affectionately calls himself) seemed completely on board with all of it. In fact, he seemed emboldened by what Party Supplies had done. “Open your fucking minds,” he rapped in one song, “don’t just listen to one type of music.”

Eventually, Bronson did get most of the crowd back on his side. As to be expected, he crushed it, but it was a short set. “Get the fuck outta here / I do this shit straight off the couch,” he boasted, in his thick Queens accent, over a sea of bobbing heads and waving arms.

Bronson rapped on a few of Party Supplies’ beats, most notably “Through the Eyes of a G,” but it was the joints he did with (the always brilliant) Harry Fraud that stole the show. When the beat for “Strictly 4 My Jeeps” dropped, the crowd lost it. “The Rockers” went over well too, and I have to admit it was nice to hear that song sans Wiz Khalifa, but Bronson’s decision to “hit (them) with that dropkick” of a chorus several extra times proved superfluous and fell a little flat. It also served as a reminder that Bronson is in it for the money as much as anything.

Even after Bronson had taken the stage, Party Supplies still found ways to continue his obnoxiousness. On one song, he joined in to play a two-minute-long guitar solo that consisted of only sour notes. He returned again for the encore, and played the riff to Tracy Chapman’s “Give Me One Reason To Stay Here,” the not-so-subtle underlying message of which was not lost on me. Bronson spit things like “bitch please, I’m the bee’s knees,” over it then left the building like it was on fire. The crowd chanted “one more song!” over and over again, but I doubt Bronson heard it. He was probably pulling up the 600 North on-ramp in the tourbus and half-a-bowl deep by then.

If Bronson’s startlingly brief set and unceremonious exit seemed strange to folks at the show, I can only imagine what they thought of Party Supplies’ overly-long, condescending music lesson of a DJ set. Ultimately, I couldn’t shake the feeling that all this was really just a desperate attempt to fill time by a couple of artists that didn’t have a lot of original material.

I hung out for a bit after the show and overheard a lot of grumbling and dissatisfied customers. One wonders if many of these kids might think twice before buying a ticket next time Bronson comes to town.

What was certain is that Bronson sure couldn’t wait to get the fuck out of Salt Lake City. I can’t say I blame him. I know where he’s coming from. When I lived in New York, that’s exactly how I felt about Queens.