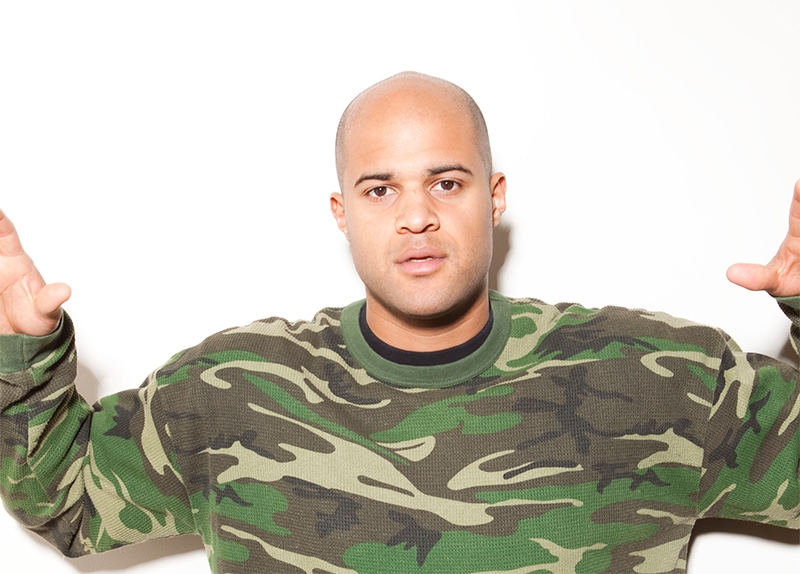 It’s almost 9:15 p.m. and I was standing in a very crowded Urban Lounge with a friend of mine, waiting for the show to start. We had been at Urban since about 7:45, and with no re-entry being enforced, we took in the feeling of the crowd and vibe of the venue. Demons painted onto tarps hung behind a turntable and on each side of the stage. The show called for what seemed like every dread-clad woman and every beard-toting, manbun-having guy in the Salt Lake City area. The crowd as a whole looked more like they were there to see Local Natives, and not the indie rap giants that are Aesop Rock and Rob Sonic, but maybe that’s just the direction of style that rap nerds are headed towards—the crowd reminds me of the crowd I encountered at Alex Pardee’s “Bunnywith” art show I attended last spring. My friend and I were even approached as if on cue by a girl neither of us knew just to be asked if we knew where she could get some “rolls.”

Luckily, before I had a chance to continue this delightful exchange, a larger bald man, wearing what appeared to be a half gold, half chakra stone chain around his neck, ran on stage. This man introduced himself in a loud, energetic and almost aggressive way as Homeboy Sandman. Homeboy Sandman spends no time on intro-ductions as his DJ immediately burst right into a 2005 Brooklyn-style beat, and Sandman was off. Homeboy Sandman, though aggressive sounding initially, returned to his more calm-sounding self as his set progressed. Even though the crowd was stiff at the beginning of the set, Homeboy executed being both a performer and hype man perfectly and had the crowd yelling and throwing their hands up. He had the crowd hyped up for the eventual arrival of Aesop Rock and Rob Sonic. Before running offstage just as fast as he ran on, Homeboy talked about his love for the “live show” and how the people at the show are the real reason hip-hop is alive. He even revealed a cassette with 10 songs on it that can only be bought and heard at his shows. Sandman then thanked the crowd for coming out and the stage was empty once more.

After about what only seemed to be a 10 minute intermission, another DJ took the stage. I would learn that he goes by DJ Abilities, but don’t let the name fool you. He was equipped with long hair, stubble, and a beer gut as he gave the “Sign of the Horns” when stepping behind the turntables, so at this point anything could happen. Aesop Rock and Rob Sonic soon followed and the crowd went mental. The trio on stage together resembles much of what you’d expect your stoner uncle and his deadbeat buddies to look like if they were about to try and karaoke Wu-Tang Clan. Then Aesop and Rob Jumped right into  “No Regrets.” Aesop’s distinctly deep voice being backed up by Rob Sonic’s aggression onstage was a great way to kick off this half of the show. They then transitioned into a track off of Rob Sonic’s Alice in Thunderdome—this flip-flop between each artist’s music continued and each song was performed as a duo. I was not prepared to see these two as a duo, because well to see them both perform live on each oth-er’s tracks during the set is something that I thought would only happen in a dream. This indie rap-induced lucid dream was not finished there either—as I mentioned, anything could happen with DJ Abilities behind the turntables. He may be the definition of “don’t judge a book by its cover,” as at the end of every other song, he would take the outro into his own hands and scratch records faster and with more technique than I have ever seen in person, so much so that he ended up having technical issues with the turntables, which caused an unscheduled “commercial break,” as Aesop called it. Soon after this, the issues were fixed and the show was back on. DJ Abilities took the crowd on a trip back in time, including a masterfully mixed version of The Beastie Boys’ “Paul Revere” and a heavy dubstep remix of Ol’ Dirty Bastard’s “Shimmy Shimmy Ya.” The highlights of the night came during the solo set by DJ Abilities in the form a mash-up of Aesop Rock’s “Nightlight” and “Daylight,” followed shortly after by “None Shall Pass” which, in my opinion, were the best songs performed the entire night.

After a short encore, the music turned off and Rob and DJ Abilities exited the stage. Aesop looked into the crowd and said, “Keep it real for life,” before exiting the stage. I looked around at the crowd of rap nerds, the demonic painted tarps on stage and took in the “realness” of the show, the genre, and this Monday night in Salt Lake City.