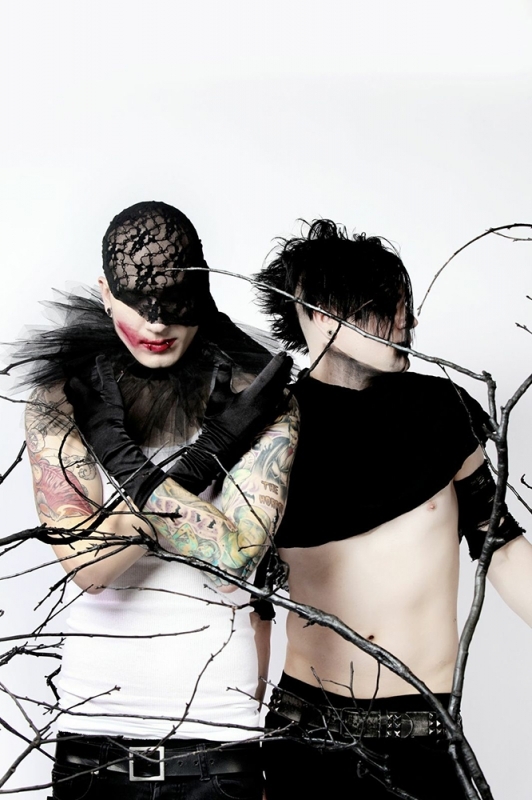 Aesthetically and Audibly Pleased by the Til’ Death Tour. Photo courtesy of Reybee

I grabbed my gear and headed down to Area 51 for a not so ordinary night of Temple. I stepped down from spinning music and allowed Reverend 23 to take the horn so I could focus on the Til’ Death Tour that stopped into town. I was not let down by a night of amazing entertainment and an energized crowd.

Scotland’s gender bending Surgyn kicked off the night in partial facial masks made of glitz and gold. They framed their chiseled jawline and beautifully structured cheekbones with fierce makeup. This duo has to be one of the most glamorous industrial bands I will ever see. It is clear aesthetics are very important to them. A combination of drag and agro-tech was taking place on stage. Veil’s over exaggerated body movements led me to think that he was a drag performer and later, during a discussion with him, this thought was confirmed. He was sharply dressed in black sequin tights and high heeled boots which complimented the gold beautifully. Sovereign wore only a black harness with leather type pants which emphasized a masculine role.

Veils’ vocal range was fantastic and sharp when he was singing and yet there as a very feminine demanding voice that came out when he spoke. Sovereign’s vocal style was more similar to death metal growls combined with clear spoken word commandments. It was pleasurable for my ears to hear both vocal styles together.

With Tracks like “Sharp As Stars” and “Hemorrhage” the crowd was thoroughly involved in the show. With their aggressive dancing and singing, I was reassured that the night was going to engulf the audience completely. Their pounding beats and backing tracks sounded very precise, clear and practiced. It is not often that you get the same quality of music live as you do in a recorded session.

The evening’s entertainment continued with the trio from New Jersey, Panic Lift. My first impression of this band was that they were going to be just another band with the cookie cutter type industrial sound—luckily, I do not go by my first impressions as I was amazed as to what followed. My favor for this band grew with each track they played. My body began to take a pounding by the synthetic beats and live drums. This was one of the times I wish I would have grabbed a set list because I did not catch the name of the song that caught my attention the most. It had amazing instrumentals, bass guitar and lyrics they went along the lines of “We Always fall Apart.” On another track I thought they were doing a cover of the Necessary Response track “Spilling Blood” but it was just a tease as it had a very similar synth opening.

The front man of this band truly had a million dollar smile, and you could tell by how often it appeared he was having a great time performing for the pulsating crowd. This is definitely one band I will keep an eye on.

I am slightly disappointed as I was not able to pick up a hard copy of their CD—when I went to buy it, a member of Surgyn was running the table. He informed me he was only selling Surgyn material. I feel that in such a small scene, every band should work together in selling and distributing music, whether it is theirs or not. It’s such a short window of opportunity to get things into the audience’s hands and you are tour with the other bands for a reason. I feel this opportunity should be worked as a team.

The room was starting to fill with the regulars of Area 51 and I was ecstatic to see the number of new faces that were showing up. It was refreshing to see them responding to the new music with open arms. They hungered for more.

The room went dark. It was time for the evening’s headliner Aesthetic Perfection. With the lighting a scene was set that reminiscent of a miner holding up his lamp. Then the flashes of brightness grew and a pop sound took over the stage. A bouncy pop. Although I love the new release, I feared for what might happen from the controversy of it. From being a D.J. at Temple at Area 51, I knew that the regulars like the harder stuff. So it was much to my surprise and relief to see the crowd get even more pumped. They were bouncing and singing right along with the front man Daniel Graves. It was obvious this crowd loved the bands new sound. I suspect I will be getting more request for the tracks off of Til’ Death.

Not only did Graves use his impeccable voice to tell you the story of his songs, but he used his body movement and facial expressions as well. I do not think that there was one person in that room he did not make eye contact with, which seemed as it made everyone feel as if they were acknowledge and appreciated.

The bands drummer Tim Van Horn was not facing the crowd so it was difficult to see his facial expressions. He most definitely was focused on pounding the skins. The precise beats were naturally flowing out of him with ease. It seemed that the main focus for him was the bass, snare, high hat and cymbals. With their distinct sounds the toms were used for special occasions. When it comes to keyboardist, I often giggle when I watch a one play because you can only get into things so much when you play one. He was entertaining to watch.

It was time to just relax and let the music carry me away. Songs like “Inhuman,” “Big Bad Wolf” and “Spit It Out” had me singing and dancing along with Graves and the crowd. This is one of the best, energetic shows I have seen all year.