00:00 / 13:13
Spotify Stitcher
RSS Feed
Share
Link
Embed
Being an Against Me! fan is exhausting. Against Me!’s mix of “fuck society” politics, self-examination and stripped-down revolt against punk paradigms filled the hole in my punk heart. Then they signed to a major label and I felt betrayed. I’ve since grown up a little (I hope) and realized that a band can do whatever they want and it has absolutely nothing to do with me.

Against Me! @ Murray Theater 03.22 with Laura Stevenson & the Cans, Cheap Girls 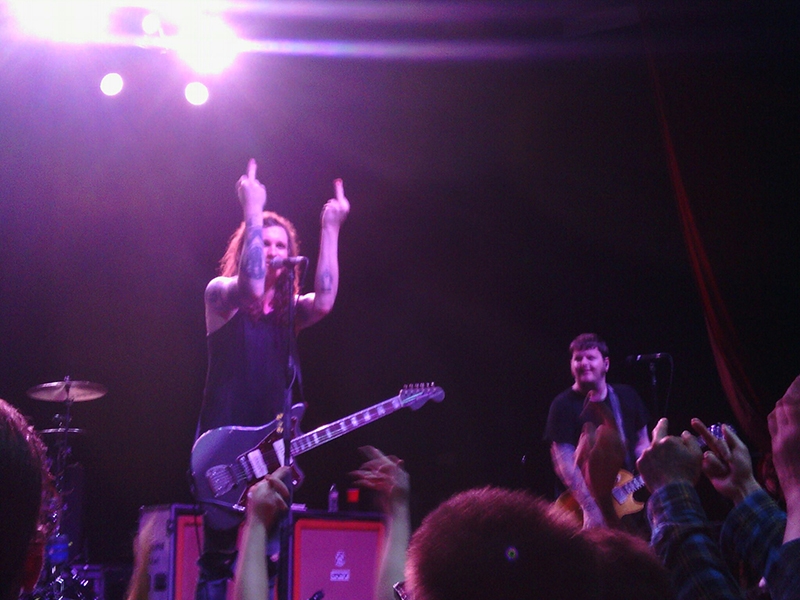 "I hope you all got what you needed tonight," says Against Me!’s Laura Jane Grace with a grin. Photo: Cody Kirkland

Like I said in my review of Against Me!’s newest album, Transgender Dysphoria Blues, being an Against Me! fan is exhausting. I grew up to this band’s music. As a disillusioned teen, I liked old punk but it didn’t apply to my life; street punk was still going strong but I didn’t have enough time or energy to make a butt flap or find a bullet belt. Against Me!’s mix of “fuck society” politics, self-examination and stripped-down revolt against punk paradigms filled the hole in my punk heart. Their sound evolved and became more polished, but I stuck with them. It was different, but in a good way. Then they signed to a major label and I felt betrayed—they started sounding like the radio punk that I hated. I stopped listening, but kept them on my Favorite Bands of All Time list.

I’ve since grown up a little (I hope) and realized that a band can do whatever they want and it has absolutely nothing to do with me. After Laura Jane Grace’s gender transition and some lineup changes since I had last followed their career, I figured Against Me! would be a totally different band. Transgender Dysphoria Blues proved that assumption to be half true—though many of the new songs veer into pop punk territory, there are still a few that could be B-sides from their early days. A cohesive message of transgender acceptance is delivered in tongue-in-cheek melodies and snarling criticisms in classic Against Me! style. This meant I was ready to love Against Me! again.

I hadn’t heard the opening bands before and I was pissed that the show was supposed to start at 7 p.m.—I knew it wouldn’t get going on time, but I couldn’t risk being late if it did. Well, Murray Theater, I was right—your doors were still closed until 7:30. After being frisked like I was attending a rap show in L.A., I immediately bought a $2 reentry wristband and headed to the bar around the corner. I had to drink a pint of Guinness for good luck, as Murray Theater is dry as a bone. I got back just in time for Cheap Girls and I wished I had stayed away for another beer or two. They played nondescript, early-aughts “indie rock” that sounded like every other band I avoided listening to in my youth—the kind of band that would tour with Death Cab for Cutie or something. Cliché whining vocals, cliché hooks, cliché bridges and disinterested performers. Yawn.

With that that set out of the way, I welcomed the next act—any act—with open arms. Laura Stevenson & the Cans assembled on the stage and started off all right. I wanted to dislike them for some reason—they were so earnest and nice-looking, and Stevenson had a sweet voice. There was a man playing an accordion and everyone was dressed well, some with button-up shirts and sweaters and I wanted to hate them for that. I couldn’t, though—they played a kind of alt-country with pop sensibility, and they played it well. I’m a sucker for good slide guitar, too. Stevenson was comfortable onstage as she made light of a microphone feedback issue whenever she said the phrase “my dad” and introduced their songs. During a serious number Stevenson introduced as a sad song, some dumbass in the audience screamed something inaudible at her. The band came to a halt. “You’re screaming ‘vagina’ at me during this song? You’re a fucking idiot,” Stevenson said. The guy jumped around and said, “Woo!” and Stevenson encouraged the audience to ostracize him. The guitarist flipped him off with a grin and they finished the set triumphantly.

After getting my wristband money’s worth of smoke in front of the venue, I returned to a tense and electrified crowd. I had run into a lot of old friends early on at the show—people who shared the same weird relationship with Against Me! and were excited and nervous to see how the last 10 years had changed the band’s live show experience. The audience was an amalgam of punks with patches and mohawks, high school girls, a couple trans folks, middle-aged ex-punkers and a random swath of average citizens. Packed to the stage at the peak of our anticipation, Laura Jane Grace swiftly grabbed her trademark Rickenbacker guitar and the band went straight into “Cliché Guevara” from As the Eternal Cowboy, sending the crowd into a frenzy. Grace looked so happy that I couldn’t help but smile while screaming along. Next up was “Walking is Still Honest”—my absolute favorite Against Me! song and, judging by the mad flailing and singing along, the crowd’s favorite, too. I bumped into Regan Ashton from Problem Daughter—he had the same shit-eating grin that I did as we screamed along like we were 18 again. It was like 2004 when Against Me! played at the Lo-Fi Cafe—they sounded a little different, but still played furiously. It was like no time had passed.

They did a few songs from their new record, which proved to be much more exciting and meaningful in a live setting as Grace introduced their themes and played like the punk rock star that she is. James Bowman, the only other original member besides Grace, brought it all back home with his unmistakable backing vocals and familiar guitar riffs while Inge Johansson, (the former bassist for fucking Refused!) made the band sound more powerful than ever. Although I missed Warren Oakes’ drumming (and his bearded visage), Atom Willard’s technically superior and energetic timekeeping kept the band crashing along nicely. During “True Trans Soul Rebel,” Grace inserted “I’ll stop the world and melt with you” into the chorus but it was fun and not cheesy. In “Pretty Girls,” she replaced “irresponsibility” with “gender insecurity” and it made sense. After many more songs from the band’s early days and ones I hadn’t heard due to conscious ignorance, they finished with “Sink, Florida, Sink,” complete with hand-clapping and a chorus of “Whoa, oh, oh, oh, oh” sung along jubilantly all around.

The encore was all screaming and no frills—“Pints of Guinness Make You Strong,” “Drinking with the Jocks” and “We Laugh at Danger (And Break All the Rules).” The audience, myself included, sang our throats raw in a fit of nostalgia and catharsis, trying to squeeze every second out of the show. Grace said she hoped we all got what we needed, whatever it may be—even if it was two middle fingers to the face. “Because fuck the world,” she said with a grin. Although Grace and most of us there may half-heartedly agree with that sentiment, we shared an understanding she sang in “Reinventing Axl Rose”—“this was where they always belonged.”