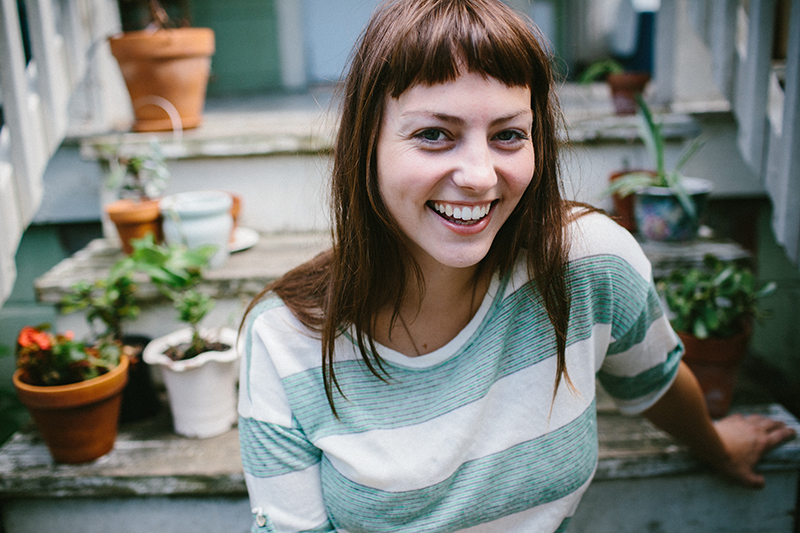 Angel Olsen possesses a prowess and mystique onstage that can make her seem otherworldly, but just as much as she is a performer, she is herself. Photo: Kelly Giarrocco

I first listened to Burn Your Fire for No Witness on a lonely-feeling February night, burrowed into art books and blankets. I remember the way Angel Olsen’s songs steeped into the air, lingering, leaving me dazed for hours. I was struck by her words, which were approachable but complex; her sound, which since bringing on a full backing band, was nostalgic and nuanced but free of gimmick; and her voice, which was dynamic and beguiling. Angel Olsen was demanding and unapologetic, and heartbreakingly sincere, and since that first listen—over a year ago—I couldn’t wait to see her magic translate to the stage.

Chicago-based opener Lionlimb—comprised of singer-songwriter/guitarist Stewart Bronaugh and drummer Joshua Jaeger, both of whom play in Olsen’s backing band—started the night off at Urban Lounge with a short set of their roving, ‘70s-influenced psych rock, setting the stage with murky, echoing reverb and slow, Southern gothic–infused ramblings. Bronaugh’s vocals (which were backed, for two songs, by “phantom vocalist” Olsen) blended nicely into—and were almost indistinguishable from—the instrumentals. Standout lyrics like “Your love is a needle and I stuck it / Your love is a guitar and I sold it” (“Turnstile”) weaved throughout lo-fi, twanging melodies, which frequently cascaded into heavier interludes of decisive riffing and clashing cymbals. The performance felt blurry, in a dreamy way, with heavy bass and pulsating synth lines melding into a luxurious deluge of guitar. A few audience members spun and danced along with Lionlimb as they ended their set as they did most of their songs, softly whittling away at a melody.

By the time Angel Olsen came onstage, glancing sharply into the audience, the crowd bustled earnestly with loud, scattered cheers and quickly tightened their circle around the stage. Olsen immediately moved into song, gently strumming her guitar and instantly making clear just how well the subdued conviction that pervades Burn Your Fire for No Witness translates to the stage. By the time she had launched into her second song, a fuller, punchier and more jangling version of “Hi-Five,” the audience—save for an incessantly chattering, and somewhat distracting, few—was captivated and electrified.

As Olsen continued into “Lights Out,” she created a lulling and textured back-and-forth between her voice and her band, with Bronough breaking into psych-filled interludes reminiscent of those that he had just played with Lionlimb. Olsen’s vocals careen and command just as well live as they do on recording, but throughout the night, there’s a sense of losing-out on Olsen’s lyricism and the fullest extent of her voice. Often, Olsen’s quieter, more subdued verses become faded and unintelligible, sometimes dipping below the sound of conversations throughout the audience. It isn’t until a few songs in with “Stars,” when Angel Olsen veers declaratively into the line, “I’ll close my eyes,” that we are hit by Olsen at her most piercing and affecting.

Throughout the night, Angel Olsen played off her audience with some coy asides: “I hear a lot of girl power out there,” she says, before channeling the haunting folk of “Acrobat” (Half Way Home), interjecting her ghostly, barely-there whispers with loud, unembellished choruses. “This song is about true love,” she says, again in that same bantering tone, “which some of you are having tonight for the first time.” That’s the first time Angel Olsen grins, too, bringing a carelessness, a joy, to a carousing, shattering rendition of “Forgiven/Forgotten”: “I don’t know anything / But I love you.”

Toward the end of her set, Olsen’s bandmates left the stage and a couple of audience members eagerly offered to buy Angel Olsen a tequila shot. Alone under the light, Olsen’s voice ached softly and formidably, and her songs traversed the unruly and tenuous as she brought us back to that stripped-down sincerity that so enchanted us in the first place. “This next song is long,” she says. “I just want you to know some stuff. I’m sure you want me to know some stuff, too. I’ll be here later.” She moves straight into “White Fire” and its immediately recognizable opening lyric, “Everything is tragic.” The song is long, but it burns slowly, gently, honestly, in the deeply felt—and deeply unapologetic—way that Angel Olsen has burned from the start.

At the end of the show, the audience stayed put and cheered loudly, and quickly enough, Angel Olsen came back onstage with her band, joking, “We love a good encore. We don’t really like to leave the stage.” Their final song was a relaxed and Americana-infused cover of Lambchop’s “I’m a stranger here.” The song is uncluttered and earnest, and its plaintive lyrics (“I would go home, but honey / I’m a stranger there”) made for a fitting and wistful sendoff into the cool October night.