00:00 / 18:49
Spotify Stitcher
RSS Feed
Share
Link
Embed
In the landscape of massive American music festivals, it makes sense that Austin, Texas—the self-proclaimed “live music capital of the world”—is home to one of the best. 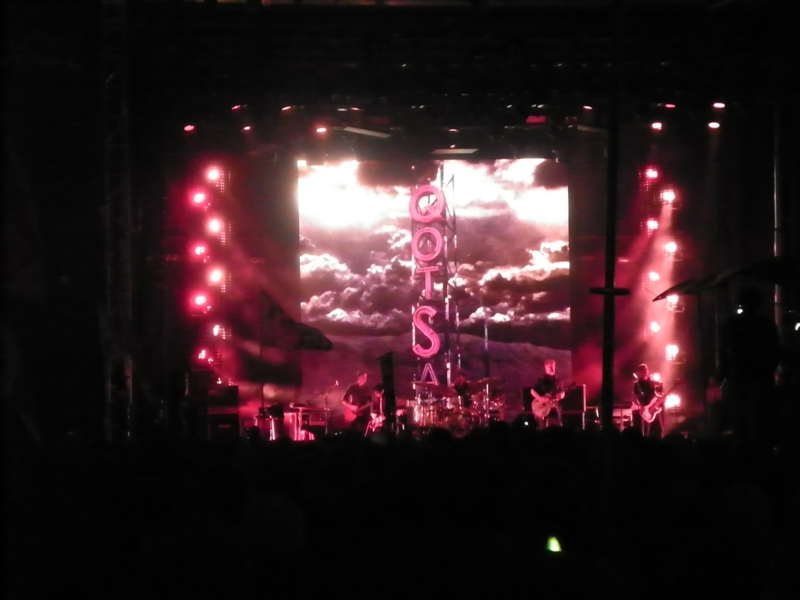 Queens of the Stone Age delivered a fresh blast of straight-up rock, heavy on the songs from their excellent 2013 album. Photo: Dan Nailen

In the landscape of massive American music festivals, it makes sense that Austin, Texas—the self-proclaimed “live music capital of the world”—is home to one of the best.

The Austin City Limits Music Festival takes its name from the roots-music-heavy TV show of live concerts that’s been broadcast from an Austin PBS station for 38 years. The festival itself is now 12 years old, and the diversity of artists on the bill has grown immensely since its twangy beginnings, putting the ACL Fest in the realm of Coachella in SoCal, Outside Lands in San Francisco or Bonneroo in Tennessee in terms of sheer scope.

The Austin festival, this year expanded to two weekends of near-identical lineups, has a few advantages over its peers. Traveling fans don’t have to make their way to a remote farm or polo field hours from the nearest major airport. At the same time, the headaches that can come with festivals in the middle of a big city—Outside Lands in Golden Gate Park, or Lollapalooza in Chicago, for example—are largely absent at ACL Fest thanks to Austin’s manageable size and easy commutes.

Zilker Park is huge, and while many locals can easily walk or bike to ACL Fest, a free shuttle system zips out-of-town visitors from a downtown pickup to Zilker. Considering 75,000 people filled the park each day, it was remarkably easy to get to and from the festival, to get a beer at the concession stand or get to a bathroom without too many long lines. I’ve been to a lot of rock festivals through the years, and none ran more smoothly than my three days the first weekend at ACL Fest.

When I first saw this year’s lineup slated to fill seven stages (plus a kiddie stage) with music from about noon to 10 p.m. each day, I was struck by the retro vibe among the “headliners.” Depeche Mode, The Cure and Lionel Richie closed different nights in direct competition with younger bands like Muse, Kings of Leon and Atoms for Peace (a new band, albeit made up of old dudes including Radiohead’s Thom Yorke and Red Hot Chili Peppers’ Flea).

Of course, when you have 130 bands ready to go, the idea of headliners goes out the window pretty fast. There was great music to be had from the minute the festival opened its doors in the mornings; bands like Parquet Courts, Wild Nothing and Utah’s own Desert Noises played early sets, and some of the best sets I saw came well before nightfall, in mid-afternoon slots when the 90-plus temps helped the beer go down easy.

A man with a plan: I had the ACL Fest app loaded and a schedule of my must-see artists all ready to go on my phone when I hit Zilker Park mid-afternoon Friday. Naturally, some of the best things I saw over the next three days were new discoveries, but my planned shows went pretty well, too.

Depeche Mode remains a great live act, something I discovered after reviewing a show at the E Center (now Maverik Center) years ago after dismissing the band for most of my life as annoying synth-pop. Dave Gahan has Freddie Mercury flair as a frontman, strutting the stage and leading massive singalongs, and the band’s hit-filled set on opening night was something to see. From old dance songs like “Just Can’t Get Enough” and “Enjoy the Silence” to darker fare like “Personal Jesus,” “Never Let Me Down,” Martin Gore’s solo take on “Shake The Disease” and “Black Celebration,” Depeche Mode was thoroughly enjoyable blast, living up to my memories of seeing them long ago.

Just before the Depeche Mode set, Queens of the Stone Age delivered a fresh blast of straight-up rock, heavy on the songs from their excellent 2013 album …Like Clockwork. They launched the set with a batch of older favorites—opener “Feel Good Hit of the Summer,” “Burn the Witch,” “No One Knows”—before going heavy into the new stuff. Considering they have yet to hit Salt Lake City since the new album came out, it was exactly what I wanted. A consecutive run through “My God is the Sun,” “I Sat by the Ocean,” “The Vampyre of Time and Memory” and “If I Had a Tail” made for probably my favorite 25 minutes of the whole weekend—accentuated by an incredible batch of special effects on stage with Josh Homme and Co.

Among the other shows I had high hopes for, most delivered. The Cure’s Saturday night set opened and closed with runs through goth-meets-pop hits, but a mid-set lull into droning, hook-free gloom killed the momentum built up with early songs like “Pictures of You,” “Lullaby,” “High” and “Just Like Heaven.” Still, hard to complain about a seven-song encore including “The Lovecats,” “Close to Me,” “Hot Hot Hot!!!,” “Let’s Go to Bed,” “Why Can’t I Be You?” and “Boys Don’t Cry.” Robert Smith’s voice is as strong as ever, and the addition of former David Bowie guitarist Reeves Gabrels to the band’s lineup in 2012 gave The Cure some serious and unexpected guitar muscle.

Franz Ferdinand is an ideal band for a festival, consistently delivering an hour of ballad-free guitar rock with serious grooves to get the crowd moving. Their Sunday set included old favorites like “Take Me Out” and “Do You Want To?” as well as a serious dose of their new album, Right Thoughts, Right Words, Right Action. New songs like “Right Action,” “Evil Eye” and “Fresh Strawberries” should stick in their sets for years. Wilco’s hour on stage Saturday touched on all eras of the band’s catalog, opening with “I Am Trying to Break Your Heart,” closing with “A Shot in the Arm,” and in between providing a set that showed they are a much more raucous live act than they ever show on record. The Blind Boys of Alabama turned a small tent into a steam bath with passionate gospel performances Friday afternoon including “People Get Ready,” their amazing version of Tom Waits’ “Down in the Hole” and a well-deserved encore of Stevie Wonder’s “Higher Ground.” Neko Case proved a fine capper of a long weekend, although her Sunday night set of roots-rock had to compete with the thundering beats coming from Atoms for Peace across the park. Case and her trusty harmonizing sidekick Kelly Hogan had fun with the trying circumstances, and when Case’s stellar band kicked into songs like “Deep Red Bells,” “Night Still Comes,” “Ragtime” and “I Wish I Was the Moon,” it was easy to forget about anything outside our little corner of the park.

New to me: One clear-cut advantage of hitting any music fest is the ability to check out bands you’ve never heard of, or never wanted to dedicate a whole night to as a curiosity. A couple of groups I never really connected with before seeing them at ACL are The National and Arctic Monkeys. I hit both stages expecting just to watch and listen for a couple minutes, and remained for their entire sets. With The National, the horn-infused performance drew me in more than any of their recordings have been able to, even in a sea of thousands and watching from far away from the stage. Likewise, Arctic Monkeys proved far more of a straight-up guitar-rock band than I’d given them credit for, and their set drawing on new album AM was a highlight of the weekend.

True Believers is an ‘80s-era rock band from Austin and led by one of my long-time faves, Alejandro Escovedo. I hit their set expecting something good even though I’d never heard them before they broke up decades ago, and was genuinely blown away by the combination of Escovedo, guitarist/singer Jon Dee Graham and guitarist/singer (and Alejandro brother) Javier Escovedo. Searing guitar solos and songs old and new turned the tent stage into a sweatbox, and only an injury to the drummer cutting the set short kept True Believers from being my favorite hour of the weekend.

Okkervil River delivered a surprisingly entrancing 11-song set; the songs from their new The Silver Gymnasium proved excellent live. The Joy Formidable’s three-piece fury included singer Rhiannon Bryan jumping off the stage and letting the fans down front whack at her guitar strings. And the totally unexpected North Indian bhangra beats-meets-funk of Brooklyn’s Red Baraat was thrilling—a band discovered merely through their proximity to the food concessions. Yes!

With direct flights from SLC, hot October temperatures and incredible food and bar options in the home of the SXSW Music Conference and the University of Texas, Austin City Limits Music Festival is a fine option for a fall getaway vacation for Utah music lovers.