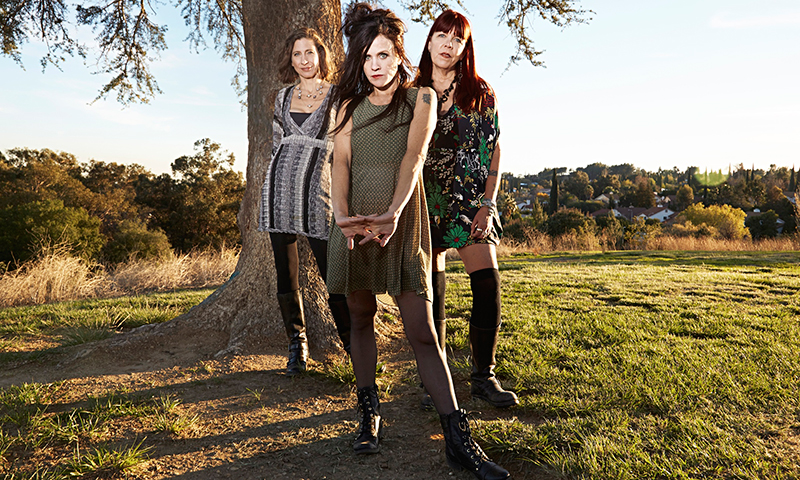 Babes in Toyland, having reunited after a 14-year hiatus, are touring again with original members Kat Bjelland (guitar/vocals) and Lori Barbero (vocals/ percussion). SLUG recently caught up with Barbero about what it was like to be back on tour and what is in store next for the band.

Playing on a Tuesday night, there was not much of a crowd at Urban Lounge at first. I noticed that the crowd seemed about evenly split between men and women, though there seemed to be more people over age 35 than under. I happened to sit next to a group of 40-something men, one of them wearing his Babes in Toyland shirt along with white Reeboks and a plaid shirt around his waist. Needless to say, he was rocking out the hardest when Babes in Toyland came on.

Astonishingly, we watched as Bjelland and Barbero walked through the front entrance like they were just your average concert-goers, right before FEA took the stage. They chatted with their merch people and other people in the audience, giving the impression that they were there throwing a party and the audience was full of old friends. Although it took a little bit of convincing, Kyle was even able to go over and get a picture with his lifelong crush right before FEA took the stage.

Without much of a sound check, FEA took the stage and hurled themselves into their first song. The three women, one-man lineup immediately reminded me of The Soviettes, and they had a similar fast-paced, punk rock sound. Letty Fea, the lead singer, had a voice that reminded me of Kathleen Hanna and danced about the stage as drummer Phanie Fea, formerly of Girl in a Coma, savagely cracked away at the drums, clearly the backbone of the band. Especially at Urban Lounge, there seems to be a stigma against getting too into the opening band, but that certainly disappeared as FEA commanded the stage. Even Bjelland came out to the middle of the floor to dance to FEA’s antics.

FEA certainly heightened the crowd’s bloodlust for Babes in Toyland, and the crowd buzzed excitedly as roadies set up the stage for the band to come on. Barbero and Bjelland took the stage, as well as Clara Salyer, who Bjelland introduced as “the best bass player we’ve had so far” giving no indication as to why Maureen Herman, the bassist from Babes in Toyland’s Fontanelle days and supposed bassist for the reunion tour, was not present. Without much of a sound check or an introduction, Babes and Toyland launched into their first song, “He’s My Thing,” and it became clear that no such introduction was needed. Bjelland and Barbero were clearly back in their element; Bjelland screeched with absolute fury as Barbero deftly clamored away on her kit. The chemistry between Bjelland and Barbero was palpable, as they laughed and cracked jokes to each other in between songs, clearly on an adrenaline kick from being back on the stage together.

Despite there being a smaller turnout, the floor was packed with diehard Babes in Toyland fans, singing along through “He’s My Thing” and “Bruise Violet,” easily the most popular songs of the night. However, each song they played was performed with an even stronger intensity than the last, as Bjelland stared out into the faces in the crowd with her signature wide-eyed glare only breaking the stare in between songs to adjust her perfectly disheveled jet black locks and shout out to her friends in the crowd. Though Barbero no longer has her trademark dreads, she swung her ruby ponytail as she threw her whole body into each drumbeat, perfectly in sync with Bjelland’s distorted chords and shrill voice.

As Babes in Toyland finished up their set, the crowd called for an encore, and Babes in Toyland were prepped to oblige. Salyer held down the beat as Bjelland belted out chords whilst ninja kicking the air and bobbing her head, feeding off of the receptive energy of the crowd. Babes in Toyland possessed the same raw power present in their recordings and their live performances from the ’90s, and everyone in the audience, whether they were die hard fans in their 40s and 50s or entranced newcomers were thoroughly engrossed in the angst and sincerity of Babes in Toyland’s performance. Though it sounds like this reunion tour will likely end with Riot Fest coming up in Toronto at the end of September, it is clear Bjelland and Barbero clearly have the guts and showmanship to keep coming back to the stage.