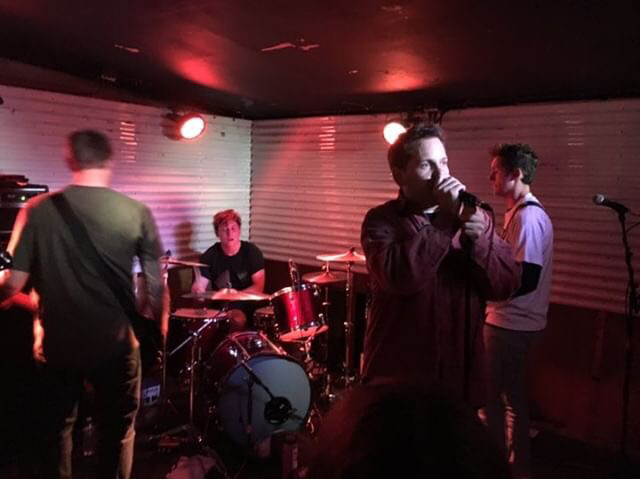 I had been anticipating seeing Basement play live since I saw the tour announcement. Leading up to this show, I pondered over the setlist they would play, what the energy of the show would be like— and really—I was daydreaming every detail. Needless to say, I love Basement. I’ve carried them along with me since the release of their first full-length LP, I Wish I Could Stay Here, in 2011 and I’ve only grown more fond of them with every release. Naturally, I was jazzed to discover that they were playing Kilby Court. October 8 was a brisk night, perfect for hoodies, beanies and jackets: the dress-code of the evening, no doubt. When I walked into the courtyard, I was overwhelmed with a sense of nostalgia (a feeling that would frequent throughout the show) as I haven’t set foot in Kilby Court for a couple of years. There was a sense of coziness to it.

Sunsleeper kicked off the night. I remember coming across them in 2016, when they released Stay The Same. It was an album I definitely enjoyed when it came out, but seeing Sunsleeper live only made me love it more. There’s something about seeing a local band pull off a perfect opening set that made me feel proud. Their sound matched the mood of the evening perfectly, and every member of the band put their best foot forward. Every song held my attention—I had a lot of fun bobbing along to them. I’m definitely looking forward to seeing more from them.

The bill included two acts I had never listened to (or heard of) before. The first being Pllush, an indie-rock, alternative outfit from San Francisco. I felt that they definitely stood out sound wise. While Sunsleeper, Elder Brother and Basement all lean more towards a modern-take-on-emo sound, Pllush added a heaping dose of low-fi indie to the mix. I thought they were charming, and I was encouraged to find them on Spotify after the show. Them and the following act, Elder Brother, have made their way into my rotation.

In between sets, the courtyard filled with cigarette smoke and laughter among every friend group: a classic sighting at Kilby. The closer we got to Basement playing, the more people flooded into the venue, encouraging me and my friends to quickly make our way into the garage, so we could score a decent spot. We did, not only because we could see the band perfectly, but because we were right in the middle of all of the fun.

The second Basement took the stage, the emotion in the room skyrocketed. Everyone in the audience couldn’t wait to hear them play. Once they started playing the first note of the first song, the whole crowd went wild. We swayed back and forth, jumped, and flailed our arms as we belted the lyrics back to Andrew Fischer, their lead vocalist. This was a theme that would live throughout the entire set and everyone banded together to keep the energy high within the small venue. Basement skimmed through all of their material, playing favorites from their entire discography. They even played a few tracks from their newest album, Beside Myself. While people, including myself, tend to dread when bands play their new material, I must say that these songs were just as captivating and fun to listen to live as their more beloved tracks.

My favorites of the night, however, were the ones that instilled the most nostalgia. Songs like “Oversized,” “Pine” and “Aquasun” pulled at my heart strings, but it wasn’t until they played “Covet,” that I felt like I was transported into a dream-like state. It sounds dramatic, I know, but I couldn’t shake the feeling. Andrew Fischer was so close to the audience, and it felt like we were all invited to scream into the microphone with him as James Fischer (drums), Alex Henery (guitar), Ronan Crix (guitar) and Duncan Stewart (bass) carried out the melodies the entire audience knew by heart. The mixture of being so close to the band, the song and the audience members around me instilled this sense of unity that lingered throughout the last few moments of the evening. We were all under the same roof, seeing a band that we loved and listening to music we connected to. I know that it’s been said that Kilby Court is wonderful because of its intimacy, but god damn, I’ve never felt so close to a band before.

As I drove home, I listened to Colourmeinkindness and re-lived the entire show. It was a show I will always remember as one of the best I have ever been to.