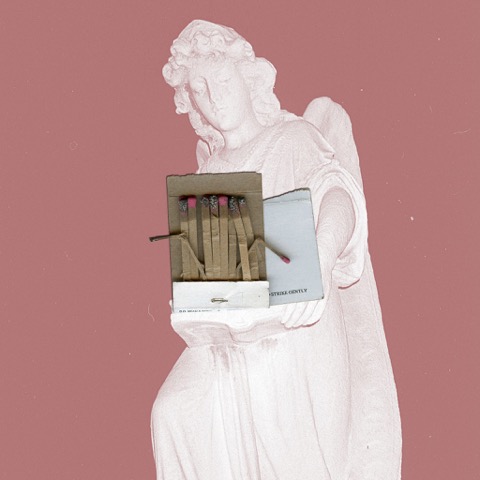 A shimmering ambiance hovers over my memory of Beachmen’s second album release show, bathing the whole experience in orange and bronze. I see guitar pedals and muffled drums from five feet away. We’re in an intimate venue where the crowd is full at six rows deep, filling the entire place up by the time the headliners take the stage. While the crowd started off much smaller than that, it’s a testament to the band’s stature that it’s the largest crowd I’ve ever seen at Diabolical Records.

My experience with Diabolical Records as a hidden-in-a-back-alley venue is almost exclusively varnished with hypnotic visuals projected onto a single person hunched over their synths, not really looking at the handful of people sitting on the floor in front of them. This can be cool—especially if lo-fi fuzz is part of their sound. That being said, what’s best for ambient zoners is not necessarily what’s best for rock n’ roll.

The opening bands seemed to envelop that washed-out vibe. The Wild War started the night off with a homemade sound that floated around the mostly empty room. With just two guys onstage, they embodied that DIY start-from-scratch mindset—think semi-psychedelic indie rock. With a bit of a fast-slow dichotomy going on in their set, it wasn’t a huge surprise to see the crowd going in and out of the venue, with most of the crowd preferring to sit in the alleyway and listen to the band from a distance.

By the time 90s Television set up, night had fallen and a few more people had shown up. With a good portion of the crowd still preferring the alleyway, the five-piece band struck up and set out for blood. The band has a reputation for its outfits, and the keyboardist, sitting on the ground next to the synth guy, in a bear suit didn’t disappoint. I’m used to the crowd being the one sitting down, but all kinds of lines were being blurred. Besides the big bear, the dress-code seemed to call for five o’clock shadows and primary colored capes.

From poppy garage rock to car/lounge songs, the band seemed to put on a different face for every song. They even brought out a couple songs they had never played live before, that fell on the instrumental-only, ambient-drone side of things. The band members switched instruments with one another a couple times, making the time in-between songs span a little longer than normal. This wasn’t helped by the fact that the set-list wasn’t exactly something in their regular musical repertoire. The vocalist would glance back at the drummer and say something none of us could hear to decide what they were going to play next.

Despite their ad hoc approach to showmanship, or maybe because of it, 90s Television played a great show that night. It’s really just a group of goofballs with light-up drum sticks and a knack for simple but semi-bohemian songs. We’ll be seeing more of them around. While they may never make it out of the restrictively niche role they’ve placed themselves in, we can still enjoy a local band keeping the wild and the weird alive.

Then came Beachmen. The mood was set, the band impatient. There we stood, basking in the Brooklyn-house-show aura pouring out of Christmas lights strung around stage. I was standing close enough away that I could just barely brush my fingertips on the tuning keys. The only movement, apart from a couple girls swaying around, was from people coming in through the door. Once they arrived, no one wanted to leave.

With Kyle Dickson–guitar, and Josh Hunsaker–bass, switching lead and backup vocals, you could hear their distinct music tastes: Kyle preferred to yell and project his voice into the mic, while Josh crooned out breathy, dreamy melodies. Their vocal styles ran perpendicular to the way they handled their instruments—Kyle hunches over his pedals, picking away at his guitar and Josh thrashes his bass around. Evan Vice sat easily behind his drum-set, taking the beat from hair tossing rock n’ roll to heart breaker pop melodies, and back again.

The new album marks a definite sense of progress since their first release. Those of us who have been paying attention to their progress on stage now have a milestone to place on their discography. Beachmen are good at what they do. The only thing to be decided is what it is they’ll do with that talent.