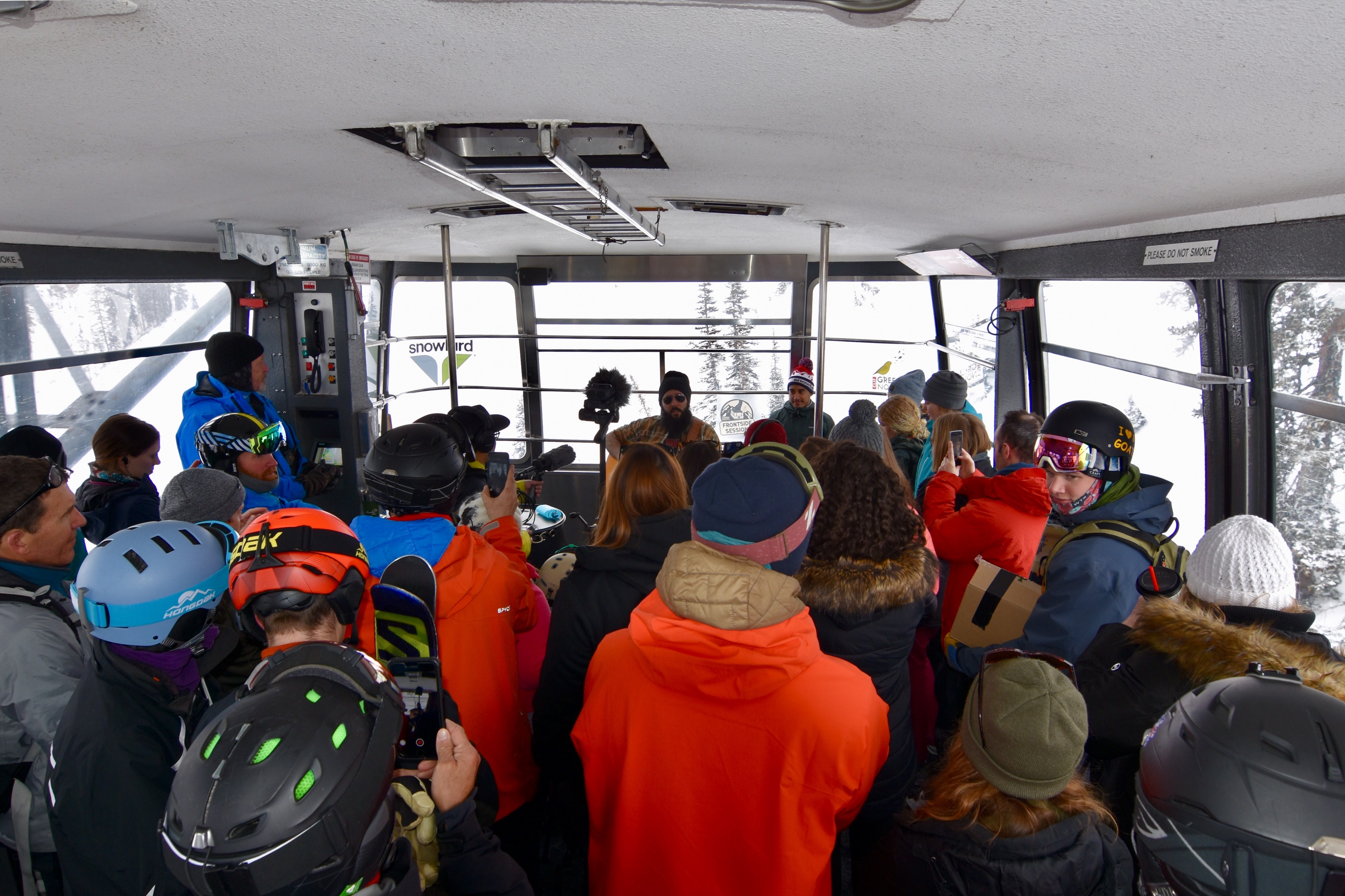 On Behalf of the Planet and Frontside Sessions, Ron Pope Serenades the Snowbird Aerial Tram

I got a text message in the morning from Eric Walle, CLIF GreenNotes Program Manager. “FYI, foot traffic is on hold for the tram because of winds,” he says, with some assurance that musician Ron Pope would do a performance either way, but perhaps just not while traveling up and down the mountainside.

I journeyed up the one-way, winding road that is Little Cottonwood Canyon to the infamous one-star ski resort, Snowbird. With short breaks of sun, I was unsure whether I’d be on the aerial tram or have my feet firm on the ground for the second round of the Frontside Sessions concert series.

Lingering around the tram base, without thinking, it felt like a normal February day. A light snow semi-flurried in the ski, somehow masking the fact that the last few weeks have been consistently between 50 and 60 degrees. As noon nears, the tram concert is given the green light, but I couldn’t help but take the almost-red light as a reminder that, despite human control and good intentions, we are at the merciless hands of mother nature.

A wave of people come and go from the Frontside Sessions booth, taking the necessary steps to get on board, like signing up for Protect Our Winters’ newsletter. A few stick around, and eventually the once-quiet gathering spot on the tram deck grows louder with chatter as 12:30 p.m. grew near. Snowbird employees sound-checked equipment, asking little humans to yelp and cheer into the microphone, fueling the excitement, awaiting Pope’s arrival.

Only seconds later, Pope floated up the stairs right past me, fully bearded and flanneled. He says casually to the crowd, “Hey, It’s nice to see you guys,” simulating a nod to old friends.  Within a few minutes, the crowd is prepped for tram loading by Hilary Arens, Director of Sustainability and Water Resources at Snowbird, who courteously thanked each attendee for choosing to fight climate change by participating in Frontside Sessions.

Ready for liftoff, the aerial tram is packed tightly from front to back and side to side. Pope is perfectly perched on a wooden crate front and center with his guitar. Soft acoustic picking silences an awe-struck crowd, some in squeaking ski and snowboard boots. After a friendly introduction, Pope wishes his wife a happy birthday and commits his performance to love songs on her behalf, “because why not?” as he settles in for an all-acoustic set.

Frontside Sessions concerts take place in a round-trip ride in the tram, so they are relatively short and sweet, but play an integral role in the overall multi-partner climate change campaign. Pope plays a sweet-sounding love song, “Stick Around,” gracefully picking the strings and crooning his way up the mountain. He pauses, then, followed by a sentimental story.

As we approached 11,000 feet in elevation, he recalls a moment in the subway years ago, on a similar stand and comparatively chilling temperatures, that marked the lowest point of his musical career. “I remember thinking, ‘If I don’t give up now, I never will,’” says Pope, testifying to the strength of the human spirit and the willingness to continue in the face of adversity. Then he laughs about the best hot dogs he has ever eaten with the few dollars he made that day.

We don’t linger long at the top, and begin the descent. Now going down, Pope plays “Headlights on the Highway,” traveling alongside the Cirque Traverse. Acoustic notes softly bounce off the tram walls while my notes smear with blue ink from the bits of snow flying in through the cracks and my gloveless hands grow stiffer and colder—I probably should have brought gloves.

Pope, too, blows into his cold hands. He turns to a strumming song, because “picking just isn’t an option,” he laughs, and proceeds to play “Morphine.” In sync with the tram’s arrival back to base, Pope rounds out his final song. The performance was gently concluded with another thank you, and a reminder to think about climate change not only this day on the tram, but every day, in our everyday actions, too—especially who we vote for.

Pope sticks around for a bit after the show to communicate his excitement in partnering with Frontside Sessions and the importance for young people to get involved. While short in length, these Frontside Sessions mini concerts are captivating unlike anything else, and they stand for so much more than a unique experience: They stand for a cause, to protect the very things we enjoy.

Frontside Sessions plans to bring more artists to the Snowbird aerial tram, so keep an eye on their calendar, and follow @clifgreennotes on Instagram for more announcements about future events. Pope is just one of many environmentally minded musicians actively fueling the message of hope and encouragement—despite the lows, and despite the challenges—to move forward and leave this planet a better place. –Lizz Corrigan