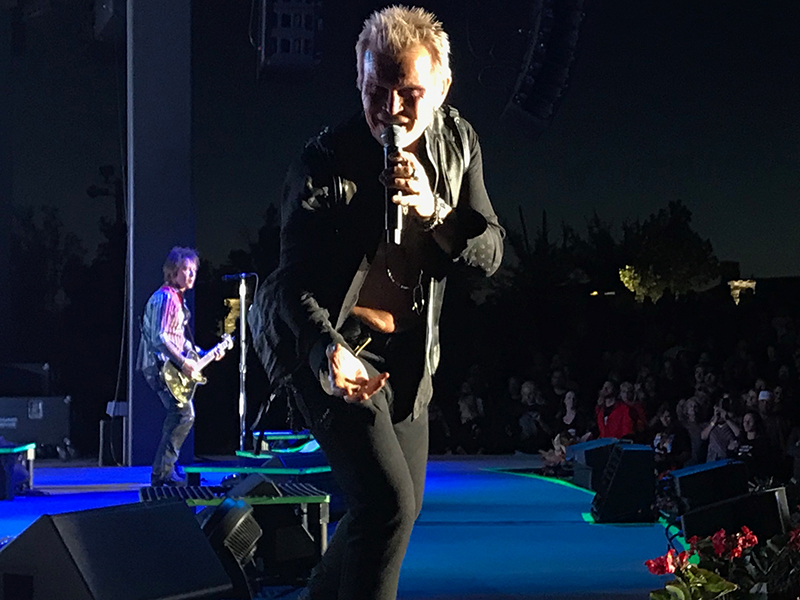 Billy Idol performing at the Red Butte Gardens on Sept. 17.

The summer of 1984 was as close to the quintessential ’80s experience as I would ever get. I was 8-years old and spent most of my summer days under the supervision of Brent, the son of the woman who looked after me during the school year. We’d spend our afternoons going to the arcade, hanging out at 7-Eleven and listening to music. Brent loved Def Leppard, I was more into Cyndi Lauper and the Thompson Twins. However, we both agreed that Billy Idol was pretty cool.

It seems strange that in all the years between, I had never seen Idol in concert. I vividly remember reading a review of his Salt Lake City stop during the Charmed Life-era, but for whatever reason, our paths didn’t cross. I even missed his X-96 sponsored gig at The Complex a few years back. I was somewhat resigned to the idea that Idol would be a box on my bucket list left unchecked.

On Sept. 17 the Red Butte Gardens Amphitheater closed out its summer concert series with a sold-out performance from Billy Idol. I made my way into the venue later than I had intended, so rather than trying to find a spot on the grass at the front of the state I made my way to the railing on stage right. There, I found myself with a couple from New York and a woman from Seattle who had all traveled to Salt Lake City for the first time just to see Idol play.  Together we endured the opening act White Reaper, an utterly generic, southern-rock act that would be more at home opening for a Journey cover band. At least we were given The Sisters of Mercy’s Vision Thing album as interlude music. Tony James, Idol’s former bandmate in Chelsea and later Generation X, just so happened to play bass on that album. I had always assumed that there was some animosity between Idol and James when the former decided to leave the band and embark on a solo career. Maybe, maybe not.

Oddly enough, I had seen Jay Aston’s Gene Love Jezebel play a devastatingly good acoustic set the night before. James Stevenson, the Jezebel’s guitarist, had also been in both Chelsea and the last incarnation of Generation X. The Jezebels were traveling west, Idol’s tour going east. Punk rock history passing like ships in the night.

At 8:00 p.m. five musicians walked on the stage. One had bigger hair than the rest. This was important because this was Steven Stevens. If I’m going to see Idol, you had better believe that I would have preferred that Stevens, the guitarist who co-wrote the songs on Idol’s first three solo releases and went on to perform one of the most iconic guitar parts in cinematic history, be right there at his side.

The band launches into “Shock to the System,” a single from 1993’s Cyberpunk, an album that was so ahead of its time that it temporarily derailed Idol’s career. Idol takes to the stage, a weathered punk and master showman.  This is followed by “Dancing with Myself,” a Generation X track that Idol retooled to launch his solo career.

There is a formula at work here. Whereas the majority of the album versions of Idol’s songs track in at less than 4 minutes, the live performances are stretched out to allow for additional noodling by Stevens and fist pumping, hip swaying and costume changes for Idol. It’s self-indulgent, but it works so well that even lesser tracks like Charmed Life’s “Pumping on Steel” and “Can’t Break Me Down” from 2014’s Kings and Queens of the Underground almost match the intensity of expected hits. “L.A. Woman” is something of a surprise. Of course, Idol adapts the lyric to “Salt Lake Woman,” which should feel like a terrible cliché, but somehow fits the occasion. Idol is essentially seducing the crowd with his charms. It’s working (both on a figurative and literal level judging by the hysteria of the audience).

“Scream” from 2004’s comeback album Devil’s Playground is followed by “John Wayne,” a song that only appears on the compilation The Very Best of Billy Idol: Idolize Yourself.  The first half of the set wraps with the classic “Eyes without a Face” from 1983’s Rebel Yell.

As an intermission of sorts, Stevens plays an extended solo that shows off the guitarist’s range as he bounces between flamenco to classical and everything in between.

Idol returns for “Rat Race” from Devil’s Playground and “Whiskey and Pills” from Kings and Queens of the Underground before reaching back to 1983 for “Blue Highway” (which is one of my New York cohort’s favorite track) and “Rebel Yell.”

At various points in the night, Stevens made his way to the edge of the stage. He’s close enough that I could reach out and strum his guitar. It starts to feel a little absurd. He’s shredding his way through “Rebel Yell” and I can’t help smile. Somewhere, Brent is going about his life doing whatever it is that he does and I’m 8-years old again standing a foot away from Steven Stevens. The set ends here, which is probably for the best. We, the audience, were running a little short of breath.

I don’t know that I’ve ever imagined what an ideal Billy Idol concert experience would be like. I do know that if I had, then it would have been almost exactly what I had just witnessed. Certainly, I would have enjoyed a few more songs, “Flesh for Fantasy” in particular, but that’s the only criticism that I can come up with. Some bands need fireworks to dazzle the audience, the combination of Billy Idol and Steve Stevens is all the pyrotechnics you’ll need.