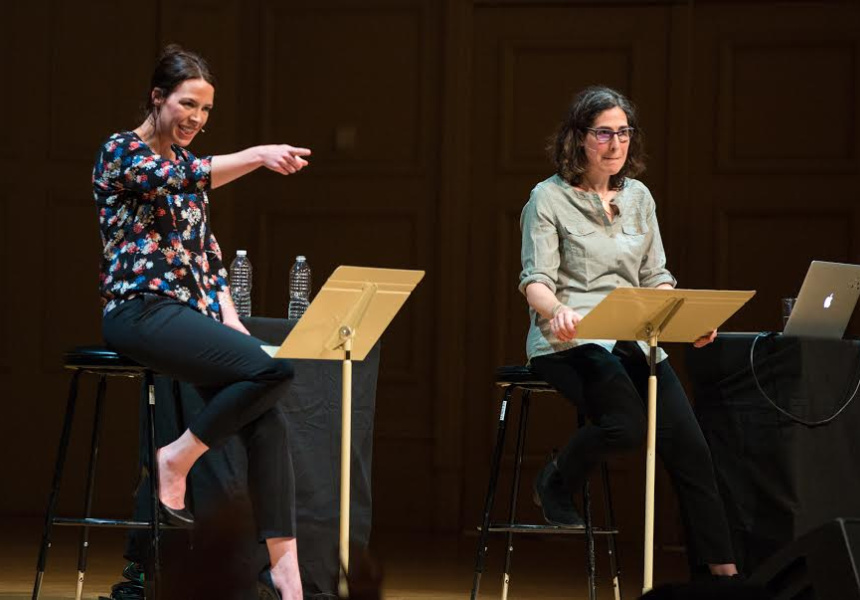 “No pressure. Nobody really listens to podcasts,” creators Sarah Koenig and Julie Snyder assured themselves as they began recording early Serial episodes in Koenig’s basement.

Though both work as radio producers on the omnipresent This American Life, the respective reporter and editor duo had little to no expectations for their off-shoot endeavor. At their Binge-Worthy Journalism talk in Park City’s Eccles Center for the Performing Arts, Koenig noted, “We thought it would be great if we could get 300,000 downloads.” They may have undersold themselves slightly, as they reached that number about three days after release. By six weeks, they had over 5 million downloads, and are currently hovering around 264 million, having reached nearly every country in the world (other than North Korea and, strangely, Eritrea).

But how exactly did two public radio workers who had been doing unglamorous, thankless work for years end up Peabody Award winners for binge journalism—practically overnight? Koenig and Snyder took to the Park City stage to talk through the processes and experiences that came with creating an addictive audio phenomenon.

“A good idea can be easy,” said Snyder in regard to the notion of serialized radio. Koenig initially wanted to pursue a more in-depth take on a This American Life project she and Snyder had collaborated on called This Week, which examined stories that had happened in the seven days prior to the show. It wasn’t until she had to pitch the idea to Ira Glass that she realized that making a show which told one story week by week was the better idea.

There was no national search for a gripping story, as Koenig was already in love with Adnan Syed’s world—one of high schoolers, drugs, romance and murder. Koenig had been reporting on the story prior to the conceptualization of Serial, and it seemed natural to delve even deeper into the Baltimore-based mystery.

Koenig and Snyder used old-fashioned television tricks to breathe life into Serial, such as including “Previously on …” recaps at the beginning of episodes and portraying characters in a multi-dimensional way that felt incredibly visual and real for listeners. The pair says that they had to ask themselves whether it was ethical journalism having their audience respond to their work the same way they would other escapist entertainment (Breaking Bad, House of Cards, etc.) After all, Serial deals with real people who are subject to the implications of media attention.

It wasn’t long before Serial hit the internet that Koenig and Snyder lost control of their careful work in many senses. As the show became caught in the crosshairs of pop culture, there was a “whodunnit” frenzy unfolding in comment sections worldwide. Reddit especially became obsessed, with thousands of message boards and topic threads constantly pulsing with theories and opinions. The Serial team did what they could to moderate inflammatory language in order to protect the privacy and safety of the subjects of their reporting, but it was difficult to keep up with the sheer volume of passionate fans around the globe.

Admitting uncertainty is one facet of the podcast that Koenig believes led to a worldwide fascination with the Syed case. Throughout the entirely of the show, Koenig was (sometimes frustratingly) honest about what she did and did not know about whether Syed was guilty. “I was trying to make a story that didn’t feel fake in any way,” she said.

Untraditional in terms of reporting, the relationship between Koenig and Syed wasn’t hidden under a clean narrative. With over 42 hours of recorded tape, their conversations ran the spectrum from psychological and emotional to light and flirtatious. As Koenig put it, they manipulated each other equally. Koenig was determined to get the truth, but above all, to get Syed to call back the next week. This was absolutely crucial to a show that relied on new facts each episode. On the other hand, Syed trusted Koenig deeply with his story, and was conscious of the fact that she could easily abuse his trust. She says of their time on the phone together, “It became a question of how well you can know someone.”

Perhaps the Serial team’s most significant realization through their journey was that the world is not composed of morons who are unwilling and unable to pay attention to a good story. “We do have the patience for journalism that takes time,” said Koenig.

Snyder added, “Truthful reporting can look a lot like art,” pointing out that artistry leads to intimacy, which leads to empathy. “It’s our job to reflect the world as it is.”