You might be surprised to hear that Black Flag is still kicking around—I certainly was. 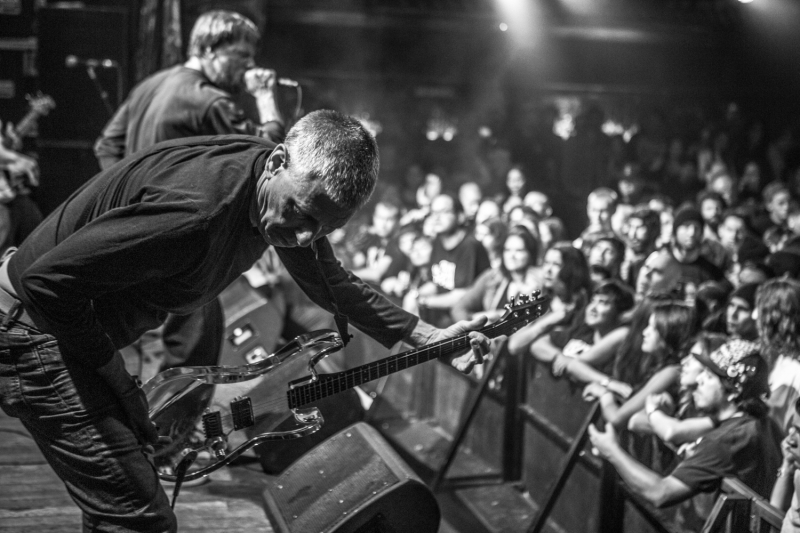 Black Flag began their set with all the dexterity of a drunken elephant. Photo: Rob Wallace

You might be surprised to hear that Black Flag is still kicking around—I certainly was. Last year, they even released a new album. It’s completely atrocious. Normally, I’d resist the urge to judge a record by its cover, but in this case, everything you need to know about the album is right there in the artwork. For a band with a reputation for cool album covers, this was a disappointment. It looks like it was slapped together in 15 minutes on an early 90s version of Corel Draw. Unfortunately, the music isn’t much better. It’s the sort of credibility-killing album that’s remarkable even in an era of a million ill-advised punk rock reunions.

The album’s one saving grace is that it isn’t really a Black Flag record—unless you subscribe to the notion that Greg Ginn is the only necessary member of the band. While it’s true that Ginn has always called the shots in Black Flag, it’s also true that one of the world’s most ubiquitous tattoos wouldn’t be nearly as common if it weren’t for a fellow named Henry Rollins. Nevertheless, Ginn deserves a hell of a lot of credit for keeping at it all of these years. Especially now—the odds have never been more stacked against him.

Ginn opened the show with his solo project, HOR. I can’t lie—it was easily the most mind-numbing performance I’ve seen in decades, and I go to a lot of shows. His set was essentially endless guitar noodling over stock beats from what sounded like a $50 drum machine. The entire hour-long set was little more than a stopgap before Black Flag went on–Even Ginn looked bored.

The crowd was sparse but enthusiastic. If I had to guess, I’d say they sold less than 200 tickets to the show. At a smaller venue, 200 people would have been lovely, but the cavernous Complex felt like a ghost town. There was a makeshift wall set up halfway into the dancefloor that was intended to give the illusion that the place was more packed than it really was. It only highlighted the fact that surprisingly few people bothered to show.

Black Flag opened as you might expect, with all the dexterity of a drunken elephant, tearing into one of their best-known songs, “Rise Above.” Black Flag’s vocalist du jour, Mike Vallely, is perhaps more famous for his skateboarding skills than his singing abilities. Nevertheless, he sounded pretty darn good. At his worst, he did an excellent impression of Dez Cadena, which is to say, he was better than anyone could reasonably expect.

Still, watching a man firmly in his middle-age try to sell lines like, “try to stop us / there’s no use,” to a mostly empty room, isn’t without some painful implications. I wanted to believe that lyric, desperately. I just couldn’t. Youthful angst can’t be faked. You actually have to be young to pull it off. Unfortunately, when you’re Black Flag, youthful angst is your lifeblood. My friend Peter turned to me at one point and said, “I feel like the machine they’re raging against is probably in a junkyard.” To be sure, that was harsh, but not without a grain of truth.

I spoke with several other concertgoers, too. The general consensus was one of excitement. There was also some mild eye-rolling. Many openly wondered how a group without Henry Rollins or Keith Morris could call itself Black Flag with a straight face. One woman told me, “I feel like they’re a really good cover band.”

Nevertheless, Ginn and Co. gave their fans their money’s worth. They played for two solid hours and churned through all the hits. I had forgotten how many great songs they have: “I’ve Had It,” “Annihilate This Week,” “6 Pack,” “No Values,” “Police Story,” “Depression” and so on. Unfortunately, the band frequently dove into long, tedious jam sessions. During “Gimme, Gimme, Gimme,” a tune that derives much of its power from its brevity, they veered into an epic noodling extravaganza that I certainly could have done without. Thankfully, they usually kept to the script.

Watching them play these songs—so many of which are classics—it really made me think about how Greg Ginn has never truly reaped his just rewards. Here is a guy who’s made some of the most influential music of the ‘80s and his group has trouble filling a mid-sized venue. With the right marketing, Black Flag could be playing Coachella. Instead, they seemed to be going through the motions. Their hearts just weren’t in it.

Still, who could blame Ginn for being a bit uninspired these days? He’s been touring for decades now, playing these songs for over 30 years. In that time, the world has changed. Hardcore punk isn’t exactly as dangerous as it used to be. A punk show loses a lot of its edge when most of the attendees have to get home by midnight to pay the sitter.

Black Flag closed the set with “Louie Louie” and all five of the slam dancers went wild. It must have been nice—they had a football field worth of space to run around in. When it was over, the crowd chanted, “One more song!” but they didn’t get it. Then again, there might not have been any more Black Flag songs to play.

I went outside and grabbed a breath of fresh air and waited for the crowd to thin out. When I returned, I found the band mingling with a group of fans. They spoke with everyone who wanted to talk to them. They posed for every picture. They shook every hand. They signed every autograph. They did all of it with a smile. I’ve shot my mouth off a lot in this article, but I have to give it up to them. That was an incredibly classy move. Black Flag may not be the band they used to be in more ways than one, but who cares? I urge you to take this opportunity to revisit their music. I’m glad I did. It’s been way too long.