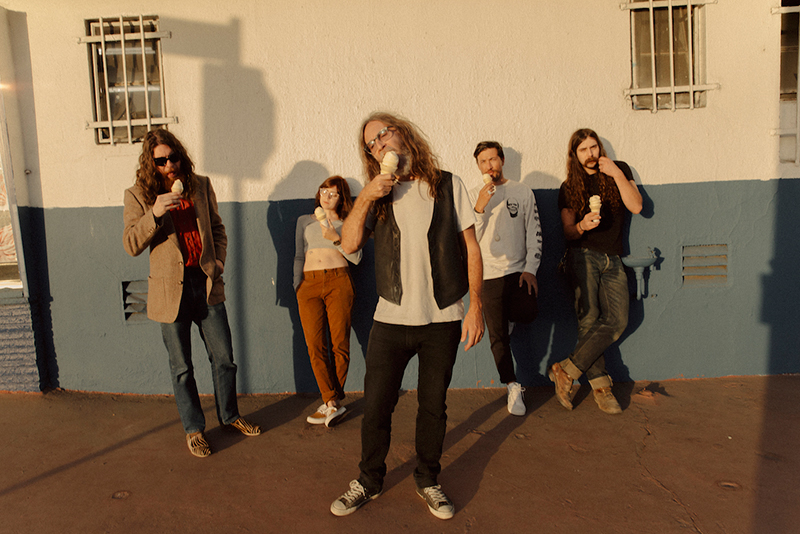 I have loved Black Mountain ever since I first heard them, and I was truly excited to check them out live at Urban after having had the opportunity to review their latest album, Destroyer, earlier this year. I was also pleased to learn that Ryley Walker was the opener, another artist I have followed and reviewed since first being exposed to his music. I knew it was going to be an interesting performance from both due to their natures and the way they play music.

Walker, who casually hangs out at his own merch table mingling with fans and soon to be fans, always strikes me as totally accessible, down to earth and willing to enjoy a moment with people who appreciate his talent and unique vibe. He took the stage with little fanfare—just his guitar strapped on and a drummer. He briefly said hello before beginning to jam. I’ve seen Walker before and am familiar with his music and style. The dude can really get into extending a song, or bridging songs together with improv and freestyle funk, so the intro to his set wasn’t atypical. However, Walker’s impromptu opening session didn’t end or bridge into anything I was familiar with. He and His drummer simply got wild with one another for nearly 40 minutes. They began slow and built up to puddles of sweat, frantic paces and a culmination worthy of respect. The drummer kept a steady pace for long periods of time, allowing Walker to really play untethered. He messed with feedback and seemed to be experimenting in real-time on the stage. The pulse from the percussion reminded me of John Coltrane’s “India.” It was a different thing; I’ve never seen anything like it, and it was pretty damn cool.

“I knew it was going to be an interesting performance from both due to their natures and the way they play music.”

Once the mood was set, the ambiance was a little spaced out and fans only had to wait a short time for Black Mountain to jump on stage. The band started heavy with “Mothers of the Sun,” one of their more well-known tracks from the album IV. The first time I ever heard that song was when a live performance on KEXP popped up in my YouTube feed and I was absolutely mesmerized by the sound, the complexity and just how hypnotic Black Mountain could be. Live, this song was great and instantly pulled the crowd closer to the band, grabbed ahold of them and sunk its hooks set deep—from there forward it was difficult to look away.

The band followed that with “Future Shade” from the new album, which is a great track as well. The band prolonged this one and added some aspects that are absent from the studio recording. It was a perfect balance of electronic music technology and sound, classic guitar riffs, dreamy keys and a heartbeat deep within the bass and drums. I love the way this band plays together. The crowd was into everything happening. From the outskirts, I could see nearly everyone nodding their heads in unison, in time with a crazy rendition of “Rollercoaster” from 2010’s Wilderness Heart.

Black Mountain’s frontman and lead guitarist Stephen McBean hardly spoke to the crowd, but he didn’t need to. His guitar playing and the songs performed provided all of the interaction necessary to deliver the goods to a thirsty crowd. Rachel Fannan’s contributions also didn’t go unnoticed. She killed it on the keyboard and has such a splendid, complimentary voice which makes the back and forth vocals on a lot of Black Mountain’s songs so dynamic and attention grabbing. Her presence was particularly strong on “Horns Arising” from Destroyer and “Druganaut” from the band’s first, self-titled album.

“Black Mountain is such a exceptional ensemble; a band with a sound so eclectic, it can feel like Sabbath, Floyd and Voivod all at the same time.”

Prior to the encore, the band really only took a break to concur on which song to play themselves off the stage to. It was a track I wasn’t terribly familiar with, but it was solid. It feature a bit of psychedelia, some 1980’s science fiction movie score as well as straight thrash. The band only took a few moments before returning with “Boogie Lover” from Destroyer “Space to Bakersfield,” from IV and “Tyrants,” from 2008’s In the Future. The band blended these tracks together seamlessly, hammering their sound atop the heads of fans, all of whom were entranced by the space cruise they had just been taken upon.

Black Mountain is such a exceptional ensemble; a band with a sound so eclectic, it can feel like Sabbath, Floyd and Voivod all at the same time. This being the first time I have seen Black Mountain in person, I have to say that their live sets are every bit as trippy and dreamt up as their studio offerings, if not more so, seeing as how they bring the whole mix right onto the stage with them. –Billy Swartzfager