SLUG Mag Soundwaves
Episode #392 – Homephone
00:00 / 17:29
Spotify Stitcher
RSS Feed
Share
Link
Embed
Not since post-dreadlocks Incubus have I seen a band come out to so many screeching fans. Arms raised and grasping for lead singer contact, the followers of Bleachers were completely exhilarated to see their band play live. 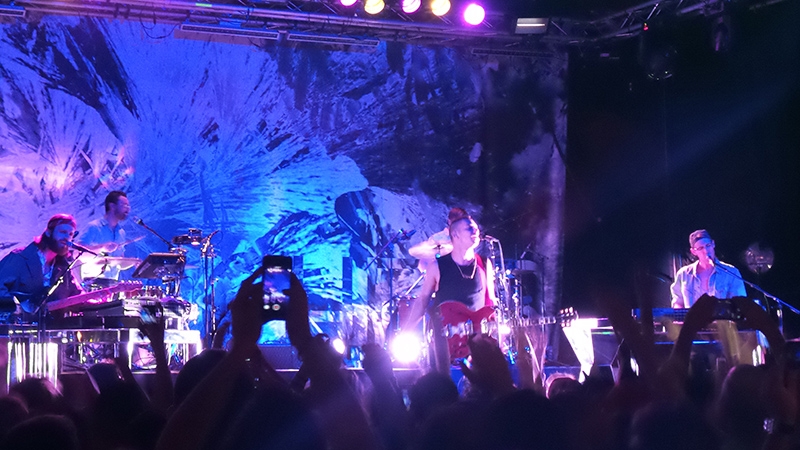 Bleachers played to an exuberant crowd at In The Venue. Photo: Benjamin J. Tilton
Not since post-dreadlocks Incubus have I seen a band come out to so many screeching fans. Arms raised and grasping for lead singer contact, the followers of Bleachers were completely exhilarated to see their band play live. Unlike Incubus however, these screeching fans were mostly dudes (roughly two thirds) and they were not ashamed of their actions in the least. The crowd was completely energized and the first hint of the warmer concert synergy was starting to show. Friday nights in Salt Lake City are the haunts of many overindulged activities and the concert powerhouse In the Venue embraces this wholeheartedly. Stage dives, drunken dancing and insanely loud acoustics were to be expected and I settled comfortably in back to enjoy the spectacle.
First and foremost, a dollar from each ticket purchased went to the Ally Coalition to help raise awareness for LGBTQ community. This gave fans the unique opportunity to not only to rock out, but to rock out for a cause.
The night started off with the Night Terrors of 1927, and if you haven’t heard of them yet, wait a few months and the radio will promptly kill all their singles (that’s not a bad thing). Singer Blake Sennett is no newcomer to the stage and loud audiences, considering his lead guitarist antics in the band Rilo Kiley. He shared singing responsibilities with Jarrod Corbell who founded the band with him. Corbell was celebrating his birthday with us that night and transferred that energy into quite the performance. They covered The Romantics song “Talking in Your Sleep” and leaned heavily on their impressive 2015 album, Everything’s Coming Up Roses. The Night Terrors of 1927’s short-but-sweet opening set was a brilliant entry to evening’s eventual happenings and afterward they invited everyone to meet them at the merchandise booth for selfies and high fives.
Joywave have spent most of their recent tour headlining, so seeing them as the band listed before Bleachers was a very welcoming sight. Their heavy pop, demented disco, rock sound was wonderfully suited to In the Venue’s boisterous sound system. As the second act they excelled at getting the Utah crowd psyched and dancing. Concert-going Utahns usually raid the dance floor immediately, but in the last year there has been a massive decline in the free-spirited boogie. Joywave brought life back into these unused hips and even the older, more reserved crowd started tapping their feet as they moved closer to the stage. Joywave closed with their fantastic hit “Somebody New” and left the crowd sufficiently warmed up for indie juggernauts about to take the stage.
Bleachers are the direct result of Jack Atonoff’s creative music passion. While touring with Fun, he was scribbling down his own works and this night Utah got the brunt of his talented exuberance.
Unless you’ve been living under a rock this past year, you’ve probably experience Bleachers’ massive single, “I Wanna Get Better.” The self-improvement anthem appeals to the young and old, which was evidently clear in this concerts surroundings. The Bleachers have a following that could easily be mistaken for most Urban Outfitters employees and this notion was furthered by the actuality of two Urban Outfitters associates twerking to my right. This night had a very attractive and fashion-conscious crowd and they definitely were there to rock and let loose.
With only one album, Strange Desire, on the books, Bleachers’ set was pretty predictable. They played with the same energy of the previous bands but played with the volume much louder. The aluminum roof above me was shaking so much that I could hardly hear Atonoff’s singing, and I had to keep pushing my beverage away from the edge of the table on account of the vibrations. The second concern was with the strobe lights, set to seizure. The poor Asian couple in front of me was actually covering their eyes and even I had to look down after a minute because I was starting to feel sick. Aside from the physical sensory overload, Atonoff’s showmanship was really something to watch. Out of the 60 + concerts I’ve seen in the last two years, Atonoff is easily the most active lead singer I’ve witnessed on stage. He’s fun, engaging and extremely friendly to his fans and I wish more lead singers were as appreciative as he was toward his audience. The song “Rollercoaster” was a clear highlight of the night but the audience still knew all the words to even their lesser songs. They covered Fleetwood Mac’s “Go Your Own Way” and also managed to squeeze in a three song encore. Bleachers left no doubt about their affection toward the excited Utah audience and on several occasions took the time to say so.
The end of the night was a sweet sorrow for everyone involved, but Bleachers promised to be back soon. The night was a wonderful introduction to the spring concerts to come and everyone left the venue very happy to have been a part of it.
Photos: