Everyone’s eyes, glassy from drink or smoke, are all affixed to the stage again, a pale blue light accentuating their impatience to see the main attraction: Bonobo. Soon enough, there is movement on the far right of the stage and a man in a tiger mask makes his way onto the stage and takes his place at another DJ booth that sits higher center stage, above the drum set, the other DJ booth, keyboard and wind instruments. Simon Green, the mind behind Bonobo and the person behind the tiger mask, begins to adjust his equipment and music is being built in front of our very eyes. 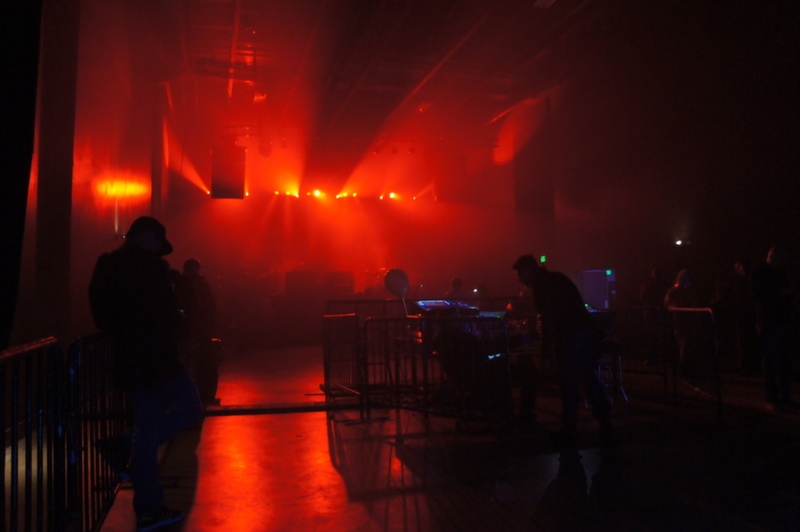 All is hallowed in the club. Photo: Carl Acheson

I stand behind a couple of skunks waiting to get into The Complex. With their faces painted and costumes on, I lurk behind them looking like some busted-ass Billy Jack with my date who would easily pass for the girl version of Billy Jack—it was our sorry excuse for cowboy and cowgirl attire. After making our way in, we head to the area where the stage is set up, passing the merch table where a female Buzz Lightyear stood selling hoodies and vinyl box sets. Not a lot of people have shown up, but then again, it is Halloween, and that makes me wonder if the crowd will get much bigger than it is.

The stage is empty, bathed in a vivid red light. In the middle stands a DJ booth, stage left there was is drum set covered in cobwebs, stage right is a keyboard on a stand and next to it there is a clarinet and a saxophone nestled in stand, also adorned in synthetic cobwebs. People begin to shuffle to the front, closer to the stage. A pair of bananas standing in the middle of the huddle that is forming, clutching Modelo tall boys, scream out “WOOO!” and “FUCK YEAH!” There is no one taking their places on stage, these guys are just stoked be there. The rest of the crowd starts to get a little rowdy themselves, impatiently moving about, talking loudly, taking heavy drinks from their Lime-A-Ritas and cocktails. More people begin to file in slowly. There were penguins, Miley Ray Cyruses, Jesse Pinkmans, vampires and more, and they all start to fill up this room that had become engulfed in a blinding green light.

Someone had taken to setting up at the DJ booth as this was happening. The bananas take to yelling again and other people join in this time. The guy at the booth finishes setting up and immediately begins playing music. Yellow spotlights cut through the thick green shade of the room as the music begins, slow and ominous. The stranger at center stage was prepping his gear and finding the correct loops and sounds and after that he began to sing. He has a deeper voice, kind of like the guy from She Wants Revenge, but just a touch softer. Everyone’s eyes are transfixed front and center as the music creeps along, when it suddenly becomes chaotic and hard to follow. The strange, green light changes to a blinding white, and the man in front of us is lost in a mix of light, fake fog and sound. When he emerges from the mess, the music finds a dancey rhythm. People start to shuffle and move—it’s as contagious as the bro-nanas cheering yelling. The song goes on for about five minutes and when it is done, the bananas pipe up once more: “HEY MAN! WHO THE FUCK ARE YOU?!” The man on stage laughs and says,” Hello everyone, I’m Real Magic.” This sends the crowd into a bat-shit craze of cheers and whistles. The act goes on for around eight songs worth of constant movement and energy, and then the man behind this opening performance wraps up his set, says his thank yous and goodbyes and is off the stage before everyone has time to realize it.

Everyone makes their way outside for smoke breaks and fresh air after gathering themselves from the first act of the night. Zombies stand with full-blown drag queens, puffing on their oil burners and talking about the flavors they mixed and what level of nicotine they weaned themselves onto. Aliens snack on big, soft parmesan pretzels while fairies and the Dark Knight drink AMFs in big plastic cups. Soon everyone is already heading back inside the venue, which is filled with even more guys and ghouls than before. Everyone’s eyes, glassy from drink or smoke, are all affixed to the stage again, a pale blue light accentuating their impatience to see the main attraction: Bonobo. Soon enough, there is movement on the far right of the stage and a man in a tiger mask makes his way onto the stage and takes his place at another DJ booth that sits higher center stage, above the drum set, the other DJ booth, keyboard and wind instruments. Simon Green, the mind behind Bonobo and the person behind the tiger mask, begins to adjust his equipment and music is being built in front of our very eyes. Soon enough, a gorilla takes to the drum set, a rabbit to guitar, a mouse to keyboard and a cat to the clarinet. All the instruments and electronically produced sounds are swarming and building, all are clear and have a sound of their own, but are coming together to create something. Everyone is moving just as sporadically as the music, until the mesmerizing sounds turn into a song of synthesized instruments backed by the sound of a full band. It’s breathtaking—Green has taken to playing a bass while he controls the sound he is producing at the DJ booth. Before long, Green and his group is joined by one more member: a beautiful woman in a black, form-fitting dress wearing a masquerade style face-piece covered jewels and feathers, who is later introduced as Szjerdene. Her voice is just as beautiful as she is, and if you’re curious as to what she sounds like, she is featured in two tracks on Green’s latest release. After an intro and a few songs, Green’s cohorts step offstage, leaving him to entertain the crowd on his own. He builds incredible songs for everyone, using just his bass and electronics in front of him. He invites his friends back on stage and then they go, leaving Green alone to rebuild a new song and a new experience for everyone at the show. It goes on like this all night, with every combination of the live band and Green on stage at some point throughout the show.

During his performance, Green’s dedication to his music and passion for what he does is most apparent. The songs that are played, from his newest release even back to stuff he released in 2006, are performed perfectly. Every little sound or detail that is in the album version of a track is in the live version that is unfolding in front of everyone. You can see the concentration on Green’s face as he goes from doing what he needs to do with his instruments, to keeping his eye on the drummer or guitarist to make sure that they hit their marks, or glancing to the side of the stage towards the tech guys to make sure everyone is still rolling at the same pace. Simon Green is most definitely a perfectionist.

The night goes on and the people attending the show hardly get a chance to catch their breath because the music never stops, which means that they can’t either.

I don’t think I’ve been to a show that has kept people as captivated as when Bonobo performed at The Complex on Halloween. It sucks when you get older and can’t stalk around neighborhoods in disguise soliciting everyone for bite-sized Snickers and bits of candy corn, but I would be hard up to find somewhere else I would rather have been that night, shoulder to shoulder with a bunch of freaks and geeks in a packed house to see the show that we did.