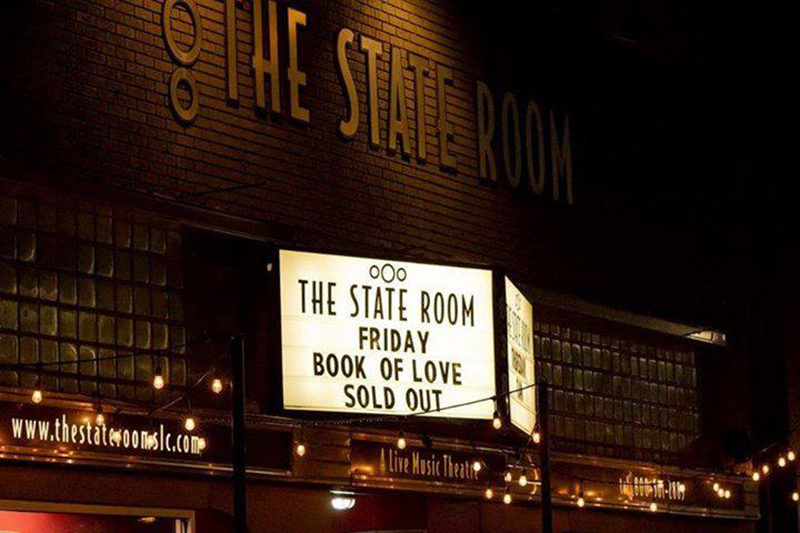 Book of Love were formed in Philadelphia, Pennsylvania, in 1983, led by vocalist Susan Ottaviano with a trio of keyboardists: Ted Ottaviano, Lauren Roselli and Jade Lee.

On the night of their SLC show, Book of Love consist of only the two Ottaviano’s (not related or married, but I do like to imagine a completely fictional narrative of the duo meeting in an elementary school lunch line and bonding over a mutual love for chocolate milk and Kraftwerk). Roselli and Lee make occasional appearances for special events and have participated on the handful of songs that the group has recorded since the turn of the century.

Instead of a typical opening act, a DJ opens the night. His set is a string of crowd pleasers, a rather generic selection of new wave hits that the audience responds to quite warmly. It serves as a reminder as to why I was never a particularly good DJ. I approached it from a selfish and intellectual space; being a DJ is more primal and selfless. You give the audience what they are hungry for.

With the DJ and his equipment removed from the stage, a lone keyboard, a computer and two microphones sit unattended. There’s also a wooden stool that at some point is given a water bottle to wear as a hat. The sparseness is a little overwhelming until Susan and Ted take to the stage.

The night begins with “Modigliani (Lost in Your Eyes),” the opening track from the group’s self-titled debut album. Ted dances behind his keyboard, playing the occasional string of notes as Susan moves from one side of the stage to the other. The live version retains the dreamlike qualities of the studio take. “Melt My Heart” from Lullaby, the group’s second album, follows.

Between songs, Susan interacts with the audiences. She tells stories about previous shows they played in Salt Lake City going back to when they opened for Depeche Mode early on through to their last visit in 1991 in support of their third album, Candy Carol. She where she recalls a particularly mad atmosphere that had people stage-diving.

Susan reveals that they’ve tried to play Salt Lake City for years, but promoters weren’t interested in bringing them here. Tonight’s show sold out within hours of tickets going on sale.

There’s always been a sugary edge to Book of Love—a brightness that is only occasionally spiked with a cynicism. “Alice Everyday” is shimmering pop. Conversely, the next song they play, “Lost Souls,” another track from their debut album, tells the story of broken-hearted love. It’s not hard to understand why Depeche Mode asked the group to open on both Some Great Reward and Black Celebration tours.

Next up is “All Girl Band,” a single that was released in 2016 to coincide with the digital-only release MMXVI – Book of Love – The 30th Anniversary Collection. The song plays homage to the rebellious new wave, punk and post-punk women-fronted groups that inspired the band in the first place. It’s a slightly rougher sound, a pop record with three coats of gloss and glitter rather than the traditional four.

“You Make Me Feel So Good,” the first single the band released, gives way to “Sunny Day,” a hopeful track sung by Ted, who reminds us that the song was featured in Silence of the Lambs.

Returning to his keyboard, Ted plays the group’s dance-infused take on “Tubular Bells.” This leads directly to “Pretty Boys and Pretty Girls,” a singalong song that was among the first (if not the first) to address the AIDS crisis in the mainstream.

The set closes with another pair of tracks from their debut album, the club classic “Boy” and “Book of Love.”

After a brief respite the duo returns to the stage, each holding a dozen or so long-stemmed roses. There is an extended instrumental intro before the sounds converge, evolving into the familiar sounds of “I Touch Roses.” Throughout the song, Susan gives the audience her roses. When the song ends, Ted distributes his as well.

The show ends with “Lullaby,” the title track from their second release. It’s a somewhat melancholic end, but the crowd leaves happy. Well, mostly happy. Everyone would have loved to have heard the beloved “Witchcraft,” but the song’s layered vocal track requires the presence of Roselli and Lee.