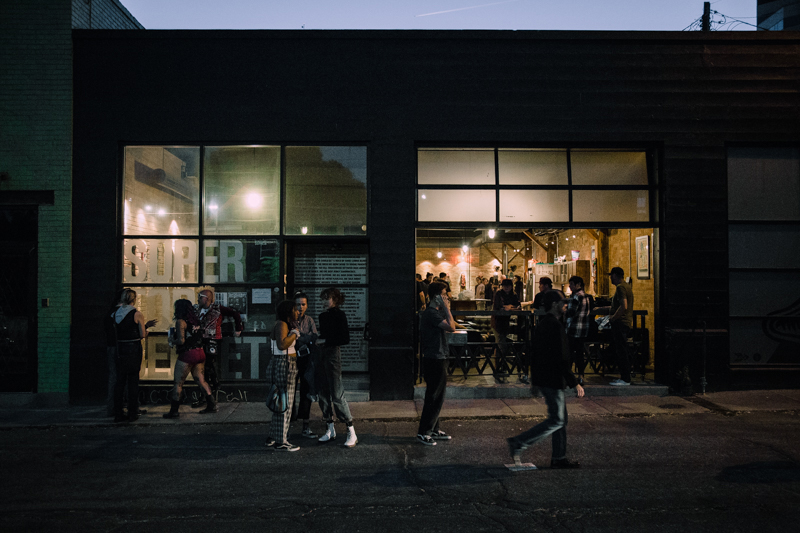 The outside of Super Top Secret on Edison St.

Since being opening in 1984, Raunch Records has been a staple for all things punk rock in Salt Lake City. The man behind the madness, Brad Collins, kept the dream of the underground alive with his shop, and people within the counterculture look to him and Raunch for all things that are loud, fast and kick-ass. Since Collins has done so much for his scene, the community decided that it was time to come together and give back to the “godfather of SLC punk.” The benefit show for Collins took place at Super Top Secret on Sept. 21, and it lit up Edison Street with punk rock fun.

The evening kicked off around 7 p.m. with DJ Nix Beat spinning high-energy, retro tracks that welcomed the crowd into the event. The tunes complemented the ruckus on the skate ramp, which was an attraction that many enjoyed for the entirety of the event. People of all ages engaged in the ramp, offering a ton of entertainment for the crowd to come. I even took my chances on my roller skates.

As 7:30 p.m. hit, more people began to trickle in. Dozens of custom skateboards hung on the walls, all decorated by local artists like Trent Call, Kyle Weight, Magdalena Jones and many more. All the visitors mosied around the space admiring each deck, pointing out their favorites and eagerly deciding on which one they would place their bid on.

The first band, Dark Lord, played a wicked set. They  brought the energy to the room and got the party started with their gritty, doom-metal sound. Bassist Brew-ja said, “I know Brad from Raunch. You’re in the scene, you know raunch. It’s a badass shop.”  Lube took the stage next. Each band played atop the mini-ramp, thrilling the audience and providing sick, live tunes for the skaters to shred to and for the audience to bop their heads along to. Lube was wicked—yelling and dangling off the ledge of the banister while growling their lyrics. They were a thrill for punks young and old, and got everyone amped up. Next up was Sad State of Society, who had more than enough amazing things to say about Collins throughout their entire set. Aldine Strychnine, guitarist, said “I remember when Brad was on the radio for KRCL above the Blue Moss Theatre in 1979—he was sitting in the chair with an inverted mohawk, a strip shaved down the middle of his head—and it’s only gotten better since.”

The last two bands, NEUTRALBOY! and Ulteriors, rounded out the night while guests finished up placing their bids and skater boys intensified their tricks. As the evening came to a close, Collins received tons of hugs and kind words from close friends and scene-goers alike. Many of whom only know Collins from his shop but admire him nonetheless. Whether they were in the scene for the last 40 years or only the last year, punkers came together to make the night nothing short of special for Brad Collins.