Rock took an unfortunate turn in the ‘90s. Then, to everyone’s relief, downloading took off and forced bands to go on the road and be entertaining to earn a living. No longer could album sales make up for being hammered during your set. Rock stars had to suddenly earn it like the rest of us. So, if you could not be wasted at your show anymore, what better way to emulate the tradition than faking the best parts of playing inebriated? Allow me to introduce Cage The Elephant.

Cage The Elephant @ The Depot 05.18 with Foals, J. Roddy Walston & The Business 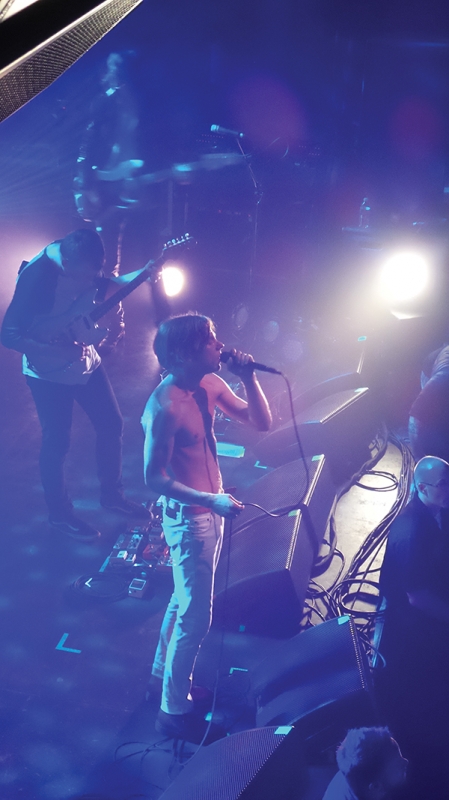 Cage The Elephant have the most incredible stage antics you’ve seen outside of a friendly bar fight. Photo: Benjamin J. Tilton

Rock took an unfortunate turn in the ‘90s. Well, it was fortunate for the “I don’t wanna rock, I want to sit and brood” crowd, but tragic for the “I wanna do something other than nod my head” crowd. Many of us spent the ‘90s (and most of the ‘00s) in stadiums leaning over to our friends going, “This was not worth the bitch it was to park here.” Then, to everyone’s relief, downloading took off and forced bands to go on the road and be entertaining to earn a living. No longer could album sales make up for being hammered during your set. Rock stars had to suddenly earn it like the rest of us. So, if you could not be wasted at your show anymore, what better way to emulate the tradition than faking the best parts of playing inebriated? Allow me to introduce Cage The Elephant. Cage The Elephant have the most incredible stage antics you’ve seen outside of a friendly bar fight. The first time I saw them, they were opening for Silversun Pickups and everybody in my group was like, “Man.. these guys are smashed.” Cage The Elephant crashed, jumped and frolicked into each other on stage with the type of fear and loathing you’d imagine from fantastic drugs—when they finally took hold. It was such a surprise after the show to see them being such polite little gentlemen to all their fans. I didn’t even smell a joint, and there were no groupies around as far as the eye could see. This was the birth of the modern rock star—the kind that had to work the next day. However, everyone in attendance at The Depot on Sunday did not fall under these criteria. Reckless abandon hung from the rafters that evening, and SLUG, as always, was happy to be there and report all the wonder that was certainly forgotten.

Sundays are odd nights for partying in Salt Lake City. Sundays in these parts involve a cozy religious slumber, highlighted by family movies and nutritional neglect. This past Sunday, The Depot shrugged off these terrible associations and invited a bunch of rock bands to add a little spice to our unseasoned happenstance. The first to embrace this indulgence in counterculture was J. Roddy Walston and the Business. These gentlemen are new to the forefront of the rock scene but stand poised and play like Vets who love to hit the ground running. I engaged a few of the patrons at The Depot in casual banter and the overwhelming consensus was, “I’ve never heard of these guys but damn, they can rock.” I’m always surprised at rock shows when those who are in attendance acknowledge they are being rocked. The origins of the patron’s intentions are concerning, but I’m happy—at least J. Roddy Walston and the Business did their part. The role of the opening band is always to get the crowd into a frenzy, and J. Roddy Walston and the Business’ song, “Heavy Bells,” secured the fate of such intentions. Hands were waving and beers were splashing to songs about the everyday person—such a fitting introduction for a band starting out and a scene looking for commonality, not superstars.
Foals are an interesting sort. They like to spare the mainstream its patronage, but on occasion, they indulge it the way a nuclear reactor might indulge a light bulb. “Pop” would come to mind from these periodic, commercial renderings but these gentlemen are much harder in concert than their albums suggest. I first jumped on the Foals bandwagon in 2008 with their album Antidotes. British indie rock was all the rage back then, so it was good to see Foals still standing, six years later, on the strength of their recent single “Inhaler.” The crowd kept muttering, “I didn’t know they sang that”—which is a compliment to the band, but a knock to the crowd’s musical knowledge. Let’s just say I hadn’t seen that many backwards hats since Limp Bizkit’s fame exploded over a decade ago.
The unfortunate side of mainstream success is the crowd it attracts, as well as the one it scares off. While I walked through The Depot asking people what song they came out for, the majority proclaimed, “The shake me song,” and “The one about the ear.” In the world of garage rock and humble local settings, I’ve been exposed to some fascinating individuals. It has been some time since boob flashing and Jager bombs reared their ugly heads in my neck of the woods. This crowd was the club scene, certainly not the bar scene. So, with that fresh in mind, Cage The Elephant took the stage. Cage The Elephant kept their set simple and played a 50/50 mix of new and old songs. Of course, singles like “Aberdeen” and “Come a little closer” showed up. The encore sent the crowd home to “Shake Me Down.” All was well with the Salt Lake City inhabitants. What really sets Cage The Elephant apart—which no one mentioned—is their energy. All the singles in the world cannot account for stage presence. This is where Cage The Elephant set themselves apart from the herd. They might not be stumbling around in mock-drunkenness anymore but they do captivate—so much so that at times I forgot the music was even playing. The same way as when (and if) you watched Nirvana back in the day and saw Kurt Cobain take his guitar over to the amplifier—you’re thinking the whole time, “What’s this guy up to?” That is what singer/guitarist Matt Shultz excels at—raw, spur of the moment enthusiasm. He might smash a guitar and he might climb something. The thing is, you don’t know. Not knowing what’s next is brilliant relief from the repetition of a life spent planned. Cage The Elephant might have a strong concert routine that they stick to, but they also inject a little chaos into the mundane. I wonder how many patrons that night did something they didn’t plan to the next day—and called in sick to work. Good job to all who were involved in this show, and thanks to the bands for being more than chirped noises from the radio.
Thank you for being entertainers and not superstars.
Photos: