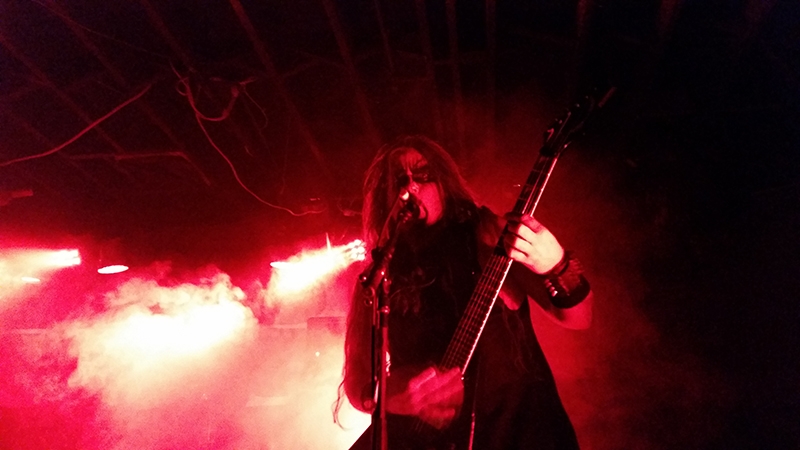 Often are the times I forget to thank the little guy who lives on my shoulder that gives me advice on occasion. Most people refer to him as Satan. He’s been there to encourage me to eat another slice of cheesecake when I shouldn’t, take yet another “one for the road” and has led me into more adventures than I can recall. So, when I found out that the black metal band 1349 was going to be playing at Area 51 in Salt Lake City while on tour for their Spellemann-nominated (think Norwegian Grammy) album, Massive Cauldron of Chaos, I figured it was time to take an evening and pay a little homage to my shoulder-dwelling friend.
As I arrived at Area 51, I walked toward the stage on the second floor, where the bands would be playing. While I did, there was definitely a feeling one would get at a church congregation, however this “legion” (as 1349 calls their fans), was not there to celebrate anything remotely “holy.”
Local band Die Off started the show with a roar. They are the epitome of what I enjoy going to shows—being introduced to bands I’ve never heard of before. They were PHENOMENAL. Outside of 1349, they were easily the best band of the night. Musically, they sounded like a progressive, metalcore-infused Blue Cheer with elements that remind one of The Black Dahlia Murder. Extreme time and tempo changes, dirgey riffs that held some elements of garage-rock, and screams that sends chills up the spine. Once their set was done, I made a beeline to their merch table and picked up a copy of their demo, which they were giving away for free. Definitely an act not to miss.
Wolvhammer were next and I must say that they, too, were an act that, musically, was second-to-none. The best way to describe their sound would be to imagine if Pentagram, Clutch and Type O Negative (minus the keyboards) had a threesome with Hellhammer from Mayhem filming, occasionally jumping in to up the tempo at times. I really enjoyed what they brought to the table from a musical perspective. The only weak point of the band, really, was the vocalist, Adam Clemans. It’s not that he was terrible, I just didn’t feel his style fit the band.
Here, however, is when the show took a lull.
Abysmal Dawn had an amazing vocalist—Charles Elliott. If only he had joined Wolvhammer. In fact, Elliott and drummer Scott Fuller were the only things that kept Abysmal Dawn interesting. Their music, a mix of high-speed thrash and death metal, was on-point. In fact, TOO on-point. Their rhythm and vocal section was able to deliver all the necessary goods (blast beats, ridiculous time changes, etc.) that you could easily tell was influenced by bands like Overkill and Cannibal Corpse, but they were extremely derivative and unoriginal. The only saving grace of their set was that the last two songs included elements of Middle Eastern flair and some hints of power metal. If they can keep going in that direction, then they could put out something really interesting.
When Origin went into their first song, I was hopeful. It was extremely fast, technical, and brutal. Then, when the second song began, it sounded like someone hit the “repeat” button. Origin are the kind of band that I, as a musician, respect immensely. They can play extremely technical passages with a level of difficulty I could probably never achieve. However, they suffered from “same song syndrome” badly. Musically, it was like watching an 18-year old male have sex—fast, fast, fast, but not leaving you feeling musically satisfied. If they, like Abysmal Dawn, could expand the boundaries of what metal could be, then they could be on the short-list of truly great metal bands.
As the lights lowered and the stage became a blood-red, you could feel the energy of the place rise to a fever pitch. So far, although not without its ups and downs, the night had been pretty evil, pretty inviting to the dark spirit, but when the members of 1349 came through a plume of smoke and broke into “Sculptor of Flesh,” all hell finally broke loose.
From moment one to the time they exited the stage, 1349 were a shining example of everything that is good about black metal. With highlights “Exorcism,” and “Slaves,” the 1349 set was a complete black metal onslaught. From vocalist Ravn’s wailing screams to the skull-crushing blast beats provided by drummer Frost live drummer Jon Rice to the wall of sound from the guitar and bass (supplied by Archaon and Seidemann, respectively), 1349 combined all of the elements of the great black metal bands before them—bands like Immortal, Satyricon (1349 drummer Frost’s other black metal mainstay), and Mayhem—into a modern-sounding take on the traditionally cold and dense calling cards of the genre.
If you live anywhere near where 1349 may be playing in the future, I must recommend you get back in touch with the little guy who tells you it’s OK to tear the tag off the mattress, and catch them.
Photos: