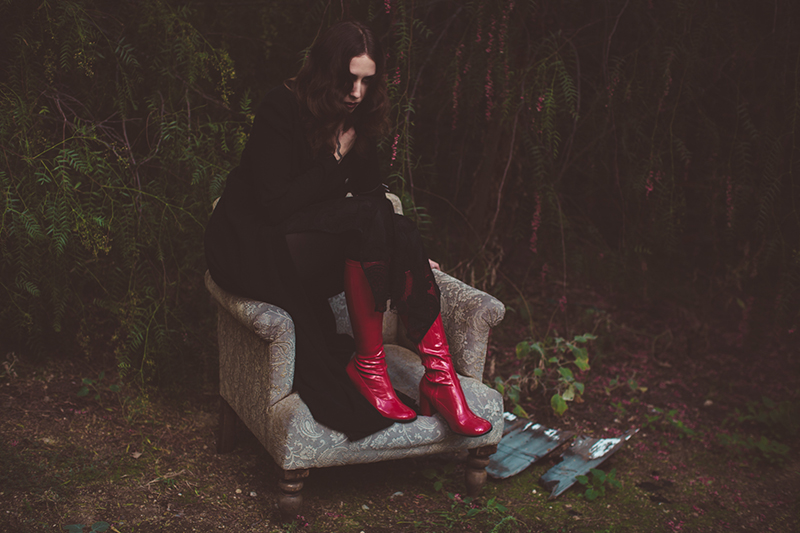 It was a Monday night at Metro Music Hall, but the house was packed with black-clad concert-goers who had come on their pilgrimage to see Chelsea Wolfe. There was something intimate and understated about the entire production; the dream-pop/dark wave artist Ionna Gika was the only act on the bill besides Wolfe, who opted for an acoustic-heavy performance. Both artists wasted little time to diving into the music. There was almost no formality, but the lack of stage banter was clearly made up for by deeply emotive music performed by two excellent vocalists.

Ionna Gika, who performed with multi-instrumentalist  Leopoldo Ross, immediately came out with no real introduction and poured her soul into her vocals. Unfortunately, about a minute into the first song, just as everyone was starting to get into the music, something went out on Ross’ keyboard that halted the show. Gika, who sheepishly admitted she was not one for “stage banter,” thanked Wolfe for bringing her on tour. After nervously asking Ross what song they should play next, she soon broke into song, sampling her own dreamy vocals with a rhythmic, layered effect. Wearing a white gown that cut away into a long-sleeved, black band t-shirt, Gika’s music and onstage presence evoked a princess from a dark fairy tale.

However, there was something murky about the way the sound was mixed that made it hard to decipher Gika’s lyrics when the synths got too heavy. In addition to that, the higher frequencies of some of the songs overpowered everything else. I personally would’ve liked more of the bass to come through in those instances. This may have just been due to the difficulties they were experiencing from the disruption they had at the beginning of the set. The moments of brilliancy of Gika’s performance occurred when Ross would pull out the analog instruments—guitar and bass. Especially in the bridge of “Roseate”, these instruments offered a contrast the synth-heavy parts of the performance.

“There was something eerie about the way the crowd was mostly silent throughout the majority of [Wolfe’s] performance.”

The crowd gathered as the stage set went up in between Gika and Wolfe’s sets. The stage display and lighting evoked the arcane. Equal care was put into setting up the witchy onstage atmosphere (replete with crystal ball and bare trees) as was put into setting up the sound. When Wolfe came out from backstage, her presence immediately bewitched the audience with her voluminous, frilled black dress as she stood on the riser with her guitar, occasionally making use of a music stand that stood to her left. The trills in her voice were lovely, and the crowd fell silent in order to hear her as she performed “The Mother Road” from her most recent album, Birth of Violence.

There was something eerie about the way the crowd was mostly silent throughout the majority of the performance. It made me think that maybe a mostly acoustic performance would have been better in a more intimate setting, despite the amount of people who came out to see the concert at Metro. Any sound from the audience was immediately heard over the music, unless whispered. At one point, the clinking of a glass bottle being thrown into the trash violently cut through the music. For me, it was jarring that any little sound like that could disrupt the performance in such a way, and I felt as though certain elements of Wolfe’s performance should have been amplified more.

It seemed as though these external elements creeped into Wolfe’s performance. In between songs, she commented on the “weird energy” of the room, and stopped her performance in the middle of the following song because she felt too “distracted.” When she was unable to complete the rest of the song, she commented that Metro must have been haunted. That being said, there is something melodic about Wolfe’s speaking voice that transitioned easily back into singing and didn’t detract from the performance. The effortlessness of her being able to belt out the higher, pithier notes of “Little Grave” was impressive and impactful. The crowd-pleasing track “Cousins of the Antichrist” was the highlight of the night, with the rich timbre of Wolfe’s voice echoing through the hall over her guitar.

“While we now know that Metro might be haunted (because Chelsea Wolfe said so), the audience that came out were left with an impactful performance from both artists.”

It was easy to believe that the eerie aura of the night was due to a haunting of Metro, as Chelsea Wolfe claimed. However, I think there was a little bit of influence from the crowd having to be rendered silent as to not interrupt the music. I also think they were equally rendered silent because Wolfe was just that riveting as a performer.

For the majority of her set, Wolfe stood alone onstage with her acoustic guitar. This was the perfect way to accentuate her voice and bring the audience into the intimacy of her dark lyrics. The occasional synths that were interlaced with Wolfe’s guitar work only amplified the spooky setting, and the performance—even with it’s small hiccups—was still amazing.

The performances from both artists were haunting, intense and memorable. Gika’s fantastical sound complemented Wolfe’s enigmatic presence and sound. While we now know that Metro might be haunted (because Chelsea Wolfe said so), the audience that came out were left with an impactful performance from both artists, despite the slight issues with equipment and sound. I left Metro that night as a new fan of Gika’s, and with a newfound appreciation for Wolfe’s vocal prowess, musicality and strengths as a performer.