I wish we had more venues like the Red Butte Amphitheater in Salt Lake—partly because it’s beautiful but also because I’m a total homebody these days and love to be in bed by midnight. Red Butte satisfies both my lazy girl and socialite lifestyles in one outdoorsy package. 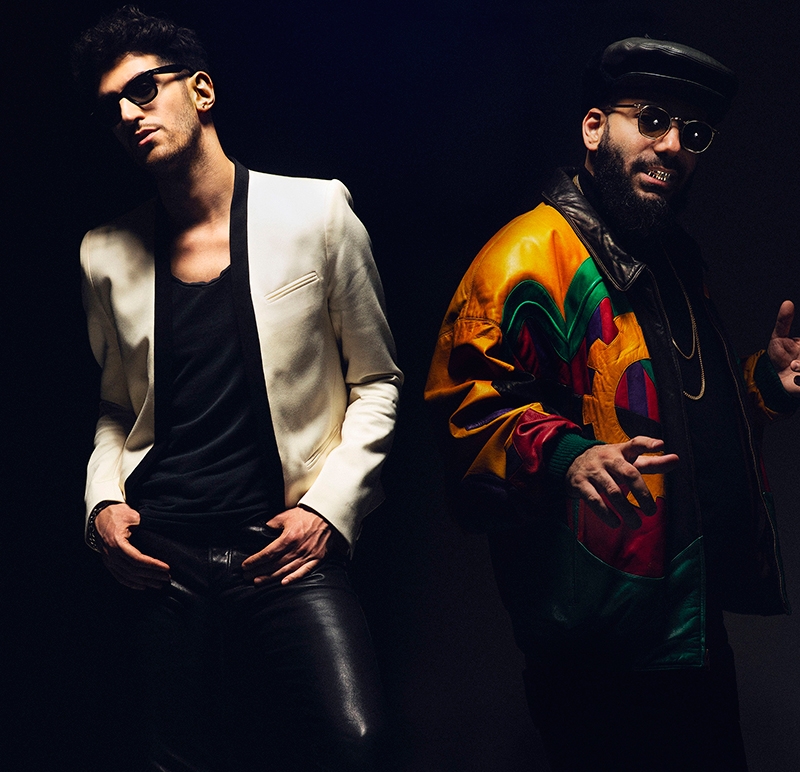 Chromeo and ODESZA presided over a rainy, drunken revel—and it was awesome. Photo: Timothy Saccenti
I wish we had more venues like the Red Butte Amphitheater in Salt Lake—partly because it’s beautiful but also because I’m a total homebody these days and love to be in bed by midnight. Red Butte satisfies both my lazy girl and socialite lifestyles in one outdoorsy package. I summoned an Uber around 5 pm and, after having to Google the address myself (my driver was new to Utah), I was dropped off in front of the Red Butte Gardens entrance where I could see the beginnings of a wicked storm brewing in the distance. I knew right then I would regret not bringing a jacket.
As I was standing in line I noticed the members of ODESZA hanging out with a few beers next to the GA entrance. Meanwhile, their fans chatted excitedly about the show they were about to see, too busy to notice that the group was standing just a few feet to their right. I got my ticket, headed in and was instantly greeted by my friend Zephyr, who works for the venue and had “secured” (put a cooler on the ground) the best spot to watch the show—directly in front of the lighting and sound booths. As Classixx began their DJ set, we sat and watched the venue fill with the best types of people for people-watching—drunk college kids. Shout out to the bro on my left dancing with a beer in one hand and a handle of bottom-shelf vodka in the other. You’re the real MVP.
ODESZA started just as the sun was beginning to set, and a massive, ominous cloud swooped in to enjoy the show with us. The Seattle based duo began their set with a live drumbeat before playing a mix of songs and remixes from their latest album In Return. At this point, most of the crowd had flocked to the front, leaving a nice amount of space in the back where I continued to enjoy the show. It was at this point I had also become desperate enough to turn a trash bag I had found on the ground into a cleverly constructed poncho, which worked better than my two friends who had hooked the arm pieces of two upside-down lawn chairs on their heads and were using them as hats. Everyone around me was drunk and getting drunker—bottles were pouring as fast as the rain, and everyone was loving it. “It’s really pouring," said Harrison Mills, "but fuck it, we’re doing one more song,” ODESZA then began “Say My Name.” The crowd’s favorite songs of the night were “Bloom,” an eclectic but ethereal electronic beat with no lyrics, “All We Need,” featuring Shy Girls, and the duo’s most well-known song, “Say My Name” featuring Zyra. I saw the group in March at the Buku Music and Art Project in New Orleans, but this time was much more enjoyable because it was outside and, although it was pouring, was more memorable.
Once ODESZA finished their set there was a long break before Chromeo were able to begin because the stage had to be moved around to avoid the rain. I had taken refuge in the tech booth behind me where the crew was busy at work putting tarp over the equipment and was nice enough to let me have a dry place to remove my Derelicte Couture Spring/Summer ’15 Trash Bag.
Chromeo finally took the stage once it got completely dark. Both the clouds and people’s liquor bottles had dried up after I had overheard multiple people shout that if they drank more, they would feel the rain and wind less. Obviously. A big portion of people had left, but those who stuck it out were having the time of their lives dancing around in the wet grass, throwing their ponchos and umbrellas as Chromeo began their first song of the evening, “Night By Night,” from their album Business Casual. The duo then took a break to tell the crowd that this is their first time playing in Utah as part of their own tour, but that they loved the venue. They played a few songs from each of their albums for over an hour and a half, pausing every now and then to talk to the crowd or do something exciting with their voices on an audio plugin. The crowd went crazy when they played their hit songs “Jealous,” “Fancy Footwork” and “Sexy Socialite,” but I was sad when they didn’t play "Mama’s Boy"—the jam that got me hooked years ago.
This is the first year that Red Butte is having electronic artists play at their summer concert series, and judging by the popularity, I would hope this is something they continue to some degree in the years to come. Unfortunately, most of the upcoming shows in the summer concert series are already sold out, including names like Utah native Lindsey Stirling, Rob Thomas, the Steve Miller Band and Alabama Shakes. Check out the lineup at redbuttegarden.org. ODESZA is currently making festival appearances around the world, and had slots in major festivals like Coachella, Ultra Music Festival and South By Southwest in Austin, Texas. Chromeo is currently on tour and has four more stops in the US before heading to Europe for the summer.
Photos: