00:00 / 18:49
Spotify Stitcher
RSS Feed
Share
Link
Embed
Glasgow-based synthpop trio Chvrches are a bombastic, bleedin’ indie-at-heart spectacle. Their hooks and heart soar song after song on their 2013 debut album, The Bones of What You Believe, and they’re not stopping short in any part of their global pop ascendancy. They passed through Salt Lake City on their U.S. tour to played a sold-out show at The Depot last Tuesday. 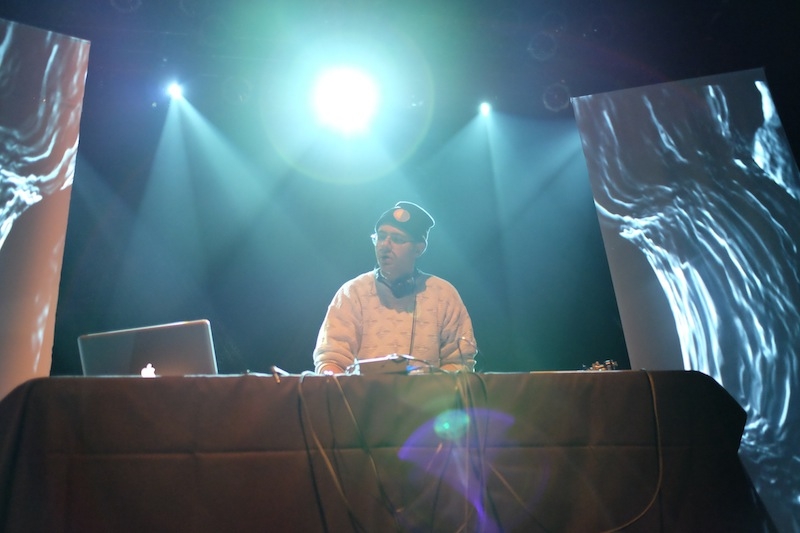 James Hinton (aka The Range) bleepin’ away. Photo: Christian Schultz

Glasgow-based synthpop trio Chvrches are a bombastic, bleedin’ indie-at-heart spectacle. Their hooks and heart soar song after song on their 2013 debut album, The Bones of What You Believe, and they’re not stopping short in any part of their global pop ascendancy. They passed through Salt Lake City on their U.S. tour to played a sold-out show at The Depot last Tuesday.

Ever feel anxiously, look-over-your-shoulder-every-two-seconds paranoid? You feel that someone is always watching you? That’s where I’m at every damn time I enter The Depot. The overbearing security, while nice enough, is just way too much. I literally laugh out loud every time I see them bring out the ropes to barricade concertgoers into arbitrary sections in the upstairs bar area. And the higher-priced balcony seating? Fuck stratifying the concert experience.

I recall how I’m here. I’m press and that means I’m privileged. Ewww. I get a beer (it’s overpriced, ewww) with mi novio and wander around the balcony, scoping out the crowd as it slowly accrues downstairs. It’s just about 8 p.m., so I decide to head down to the photo pit, just in case the show starts on time. It does. The Range (aka James Hinton) comes out to a table onstage hosting a familiar-enough looking setup. The remix-heavy electronica is familiar enough as well, and the crowd is receptive to it, but not looking to waste their energy, it seems. Hinton’s set goes on for 40 or so minutes, maybe more, and I’m getting fairly bored here at the end of it.

Near the end, Hinton drops his spaced-out remix of the headliner’s track, “We Sink,” and the crowd grooves in appreciation, though it preempts some of the magic of Chvrches, set to appear onstage shortly after. The beats go on, and Hinton wraps up his set to a pleased reaction from the crowd, and I fly in search for a gin and tonic (also overpriced). Slurry dirges from The Cure’s Disintegration prep the audience for a serious pop spectacle. Sensing that the show is abiding by a strict schedule, I head back downstairs to prepare myself for it.

These moments before a band takes the stage, which normally make me feel as if I’m endlessly standing myself into the ground, tonight seem awe-inspiring. I’m in the photo pit for the first time in my “professional,” “journalism” “career,” and both the view and the anticipation are vast. Depeche Mode’s “Enjoy The Silence” is playing and I’m reminded of both the trappings of making synthpop fit arenas, and of how fucking cool arena-sized synthpop can actually turn out. The crowd behind me is stacked with bros and young fans, many of whom have traveled from somewhere far out within a 10-hour driving radius of SLC just to see Chvrches.

In what must have only been seconds, Chvrches’ Iain Cook, Lauren Mayberry and Martin Doherty enter from stage right—Cook and Doherty position themselves behind synth podiums built to look like big sevens, while Mayberry adjusts herself to tonight’s surroundings. Chvrches’ iconography ( > < ) glows in flashy blues, reds and greens behind them. Keys are pressed, and the skittering arpeggio of “We Sink” blasts out from the stage. The crowd’s hyper behind me. The other press people are getting great shots with expensive cameras and then there’s me—I’m fixated on the apprehension of Mayberry as she faces Utah for the first time.

After a long moment, I remembered why this is the best seat—an actual seat in this instance—in the house, and start taking some photos. From this close, the magic of this kind of pop show is readily apparent. Mayberry, looking like a character from the U.K. series Skins, is seemingly out to mainline our pop culture with direct-to-the-heartstrings lyricism, taking even the bros in tow. I continue taking photos, while they transition into “Lies” and then “Lungs,” hitting their stride somewhere between loud synth bleeps and the flashy spectacle behind them.

Three songs are over and bam!—I rush out of the pit, compose myself and rejoin mi novio just as the icy chirps of “Gun” commence from the stage. I’m farther away now, but any place in the venue seems to provide an able position for spastic dancing, which I notice is happening in microbursts all over the crowd. Bros, the backwards-capped, tank-topped, girlfriend-grabbing kind, are bouncing up and down, fingers crimped into finger gun shapes flicking in odd patterns above their odd lives. Bros on the balcony are fist pumping and swaying like it’s still 04.20. I think to myself, “How has the tumblr dream of heartfelt synthpop become a broscape?” as the chorus of the song, maybe the most palpable Mayberry’s got, stretches out over the venue.

The band shifts the buoyant mood into gloom with the next tune, “Night Sky.” During a pause, Mayberry says something about being about on a higher altitude than their native Scotland, and then they head into the song “Strong Hand,” a bonus track that is the only non-album song they end up playing. “Science/Visions” is next. The songs lift in the vaulty venue, though so far, they’re remaining pretty close to how the sound on the album.

“Recover,” with a synth patch that I only now realize totally recalls Speak and Spell–era Depeche Mode, picks up the moodiness a bit, but the heart’s still out on the sleeve. The synths are monumental and kick-ass. Bros are still chill-as-fuck swaying around the balcony—their show is still laugh-out-loud funny as shit. Cook and Mayberry switch places for “Under the Tide,” which has an equally retro, analog synth backing. The song swells massively at the end, and crashes as the band goes right into the quieter guitars of “Tether,” which builds up the pop heartache again, bigger than before, with crystalline synths washing over Mayberry’s vocals.

Mayberry announces their last song, which ends up being the one everybody’s been waiting for, “The Mother We Share.” I feel as if the set has been short, but they’ve played almost all they’ve got so far, and I’m appreciative. Mayberry is, too, she says, upon such a joyous turnout for a place that they’ve never been before, and she performs now, as a young visionary, the pop anthem that announced her as a brilliant interpreter of human heartache almost two years ago. The bros, and I, lay it all out—here, now, as we strum our own heartstrings alongside this massive tune.

After a super-short pause, the trio reclaim the stage to wild applause. They play their album closer, “You Caught the Light,” and totally play up the “Plainsong” echoes that lurk in the recorded version. I’m spellbound at this point, enjoying the drawn-out synth and guitar washes. They finished with “By the Throat,” a succinct version of the Chvrches aesthetic—hip-hop influenced drumbeats, shimmering synths and heartfelt, grand lyricism—which flare up the synthpop spectacle one last time. They’re done, and it’s not even 10:30 p.m.! Since when does a thing like this happen? It’s been sincere pop alchemy.