SLUG Mag Soundwaves
Episode #395 – Cotes
00:00 / 18:06
Spotify Stitcher
RSS Feed
Share
Link
Embed
Salt Lake City Concerts had brought the We Love You Tour to town for a stop at my favorite place, In The Venue. The powerful line up consisted of Stich, New Year’s Day, William Control and Combichrist. I was given a few moments to sit down and pick the brain of the headliner’s front man Andy LaPlegua before the show and reached a new level of inspiration by what he had to say. 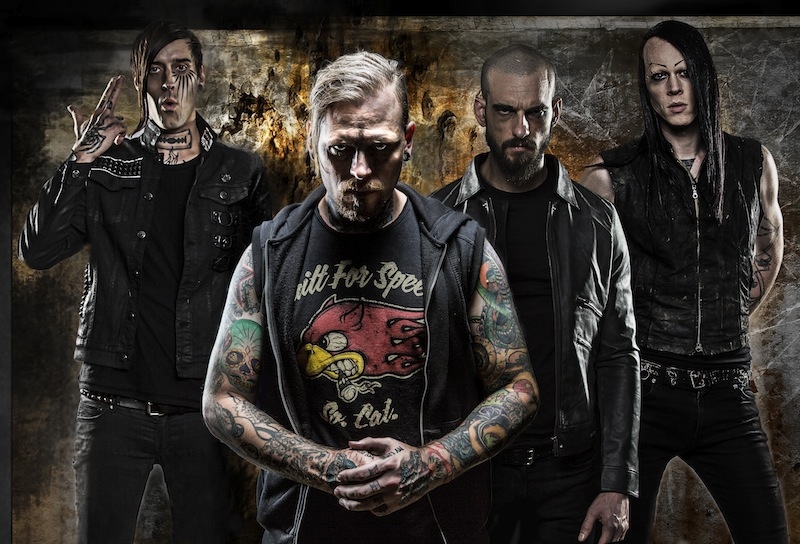 Combichrist feels that it is important to touch base with their fans and get on a personal level with as many of them as they can. Photo: Warren Whitmore

Salt Lake City Concerts had brought the We Love You Tour to town for a stop at my favorite place, In The Venue. The powerful line up consisted of Stich, New Year’s Day, William Control and Combichrist. I was given a few moments to sit down and pick the brain of the headliner’s front man Andy LaPlegua before the show and reached a new level of inspiration by what he had to say.

I wanted some clear history on the band, as the Internet and hearsay is not always accurate information. I figured I would start with their name. LaPlegua informed me that D.r.i.v.e and Hudlager were not previous names of Combichrist, but three different ideas that he had spliced into one. Combichrist was a comic book character LaPlegua created, which he thought would be a good mascot for the band. As for the myriad of LePlegua’s side projects, most everything has been set aside for the time being, so Combichrist can be the main focus. He did mention he has been doing some work on his punk bands, Scandinavian Cock and Scandy.

Combichrist feels that it is important to touch base with their fans and get on a personal level with as many of them as they can. They have decided to have a V.I.P (Very Important Pizza) party before most of their shows. They really cannot hang out and do after parties like they used to, because they always have to pack up and get on the road to the next town. As for LePlegua’s favorite toppings on his pizza, it varies from pepperoni to bacon and pineapple, depending on how long they have been on tour.

On a personal note, I found out that LePlegua was kicked out of his music classes for scratching Mozart records. It appears as if he has always had a rebellious side to him. He also loves to play video games, and when a game gets released that he likes, he will lock himself in his house for a few days to beat it. Gears of War and HALO are some of his favorites to play. It’s nice to see a man into music at this level who is a gamer as well.

I had a few questions about their new release, as it’s much harder than previous releases, and some of thing things on it really made me chuckle. LePlegua declares that he is an artist—not a musician—and the more aggressive vocal style and harder sound is an expression of him being true to himself, and where he wants to take his sound. When I asked the meaning behind my favorite track, “Fuck Unicorns” I was told a story of how a tour bus was flooded with unicorns by drummer Joe Letz’s fans leaving no room for members of the band to relax. LePlegua decided enough was enough and murdered the most animated unicorn by placing it in the microwave, where it proceeded to explode. Also, on the track “Retreat Hell Part 2,” there are a few interesting samples I wanted to ask about. I was surprised to find out that the person who was ranting about getting his junk bitten off while using the bathroom was none other than the shock rocker Marilyn Manson.

Most importantly, I asked about the threat of a dying music scene. LePlegua stated, “Don’t complain if you’re not going to show up.” There are plenty of things going on—you just need to stop complaining about things on Facebook. Get out and support shows that are happening. He also adds that the there is a “’figure-eight pattern’ that happens through the music scenes—it goes up and down and the only musicians that get anywhere are the ones that stay with it.” LePlagua also wanted to say cheers to everyone and thank them for their support, as Combichrist couldn’t do anything without their fans support.

It was time for the show to begin. A packed room full of fresh faces lets me know that the combination of electronica and metal just might be what it takes to get these kids out. Stich was the opener. and it appears that Derek Winters Rhodes, of the local favorite Tragic Black, has teamed up with Ben Houz to create a band with an aggressive metal sound. As this was one of their first live shows, I am looking forward to watching them evolve. They fit in perfectly and were a great way to get the night’s entertainment started.

The stage was cleared and New Year’s Day entered, waving flags of their symbolism. A spicy female was the lead vocals of the band, with an outstanding voice that reminded me of the band Seether’s vocalist. Her sassy vinyl attire looked amazing but it had to be really hot under those lights. Performing in it caused not only the people in the room’s temperature to rise—she had to be melting in it as well. She completely took control of the room. The musicians behind her were also great performers—they looked pumped, engaged and happy to be there. I was delighted that the crowd responded to the stage dive as she pushed her guitarist into the awaiting hands. Everyone appeared to be having a swell time. It was also nice to see her come out and touch base with her fans when they were finished performing. There were quite a few that were waiting for pictures and autographs with her and she seemed happy to oblige them.

Air raid sirens and flashing cubes called the crowd’s attention to the stage after the intermission and a very dapper William Control took the stage in a priestly garb. He may have been a little too dapper, as he tells the crowd not to fuck with his hair while he is engaging them. I was very impressed with the voice on this man, as well as his consistent high-energy stage performance. There was a great composition of noise and synthpop mixed in with the bass lines—which is always one of my favorite types of music to dance to. I realized I needed to have this music to add to my set list, but was highly disappointed when I went to purchase their cd found the merch booth unattended. The merchandise person for the band was also their keyboardist—not a bad thing, as I am sure it allows more conversation with fans—but I really like to purchase the music while the band is on tour so they get all of the profit. It looks as it if I have to purchase it on I-Tunes this time.

Control and his keyboardist addressed our states’ addiction to kink and stimulated the room with something other than music—visuals and removal of clothing only fed the desire more. Control must love our beautiful city, as he informs us he will be back in the fall, making that his third performance in a year. When his show was finished the audience wanted more, but due to time restraints, he could not perform an encore. The level of the intensity during his performance assures me that each time he visits, his crowd will grow. I will be checking out his show every time he visits.

It was time for the headliners of the evening’s entertainment—Combichrist. They opened up with the track “We Were Made to Love You” and a chant of “Hate, dishonor, love, destroy” began filling the room. While this was happening, I visualized an apocalyptic mob. The sound was metal mixed with electronica, and my body began to take a pounding by the sound of drums, bass lines and the stomping and shouting of the crowd. There was so much energy, people were literally climbing the walls.

Letz was very entertaining with his onstage antics. At one point he brought his tom out and trusted the crowd hold it as he played and later stood on his bass drum, enticing them with sexual gestures. He is one of the most animated drummers I have ever seen and, by watching him, I understood why he has so many adoring and dedicated fans. Bassist Abby Nex was also very entertaining to watch, as he appeared to be in an altered state, or maybe he is just normally like that. Either way, it was a precise performance and was very tight—nothing seemed off beat our out of place. It is obvious this band enjoys playing together and enjoys each other’s company. When they were finished, the mob wanted more and after a few moments they came out to play a few more songs, including one of my favorites “Get Your Body Beat.” Finally, I was dancing.

Feeling the rush and energy from the crowd, I realized that I wanted to dance even more so I headed over to Area 51 for the after party. Where I could continue to dance and hear even more Combichrist. This was an amazing energetic show, and I am looking forward to seeing more from each one of the bands that played.