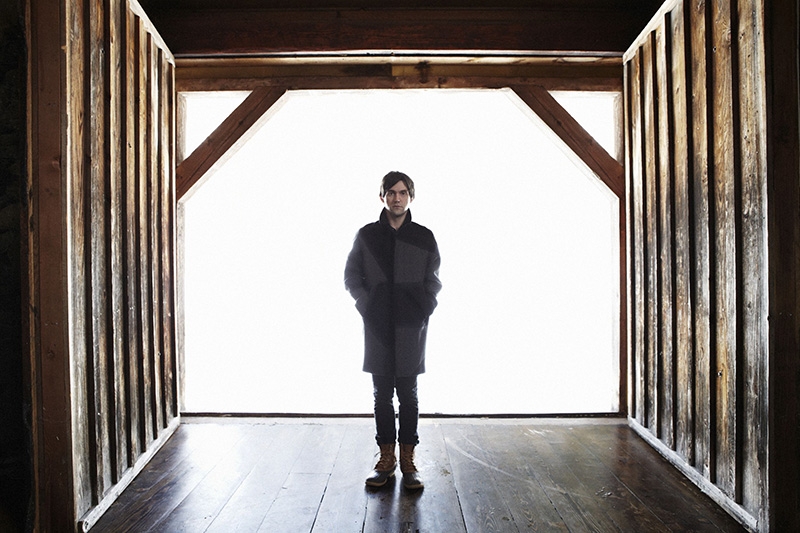 Conor Oberst’s new solo record, Upside Down Mountain, is a testament to his growth as a songwriter. Photo: Butch Hogan
It’s likely that when you think of Conor Oberst, you think of Bright Eyes and the brooding, bleeding-heart folk that a generation of young adults is enamored of. His sensitive lyrics became anthems for both love stories and breakups, and his storytelling struck a chord with many 20-somethings trying to navigate romance, careers and life. Oberst may be pigeonholed as an emotional teenage songwriter, but his latest album and second solo release, Upside Down Mountain, suggests that his growth as an artist is still a working priority—it has the finesse of a seasoned musician without any loss of tenderness and relatability.Salt Lake City was the first stop on Oberst’s Upside Down Mountain tour, and even though I showed up more than one hour early, the line curved endlessly up the dusty, sparsely shaded hill. People stood awkwardly—not sure if they should wait to start drinking their wine coolers until they made it inside or not. A volunteer for Red Butte gave potential line-butters the eye. I was starting to get a strange, September sunburn when the gates opened and the venue was flooded with eager ticket-holders. It was a frenzy of picnic baskets and strategic blanket placements until the opener, Jonathan Wilson, took the stage.A multi-instrumentalist, Jonathan incorporates as many sounds as he can into his songs—keys, horns, bells and even pedal steel guitar. As he and his band played, the layers of sounds created atmospheric, orchestral music that filled the space with a gentle, pressing energy. Jonathan’s vocals were reminiscent of Pink Floyd’s Dark Side of the Moon, with a far-away, ethereal feel that was complimented by the soulful, ’70s jazz instrumentals. Their set waned to an end just as the sun was about to go down, setting the stage up nicely for Oberst.Even though Oberst is in his 30s now, he’s got dark, shiny hair and wears a vegan leather jacket—he’s still totally dreamy. Without an introduction, he began to play “Hundreds of Ways.” His stage presence was introduction enough to replace any crowd stagnancy with liveliness. When he performs, he brings a sense of both wisdom and youth, and his honest approach to songwriting is what bridges the gap—he covers travel and politics and matters of the heart with eloquence and intensity.

Oberst juxtaposed songs from Upside Down Mountain with older Bright Eyes tunes, mostly from their iconic album, “I’m Wide Awake, It’s Morning.” In both cases, a country, almost rockabilly sound was delivered, with cheerful guitar and rousing keys and bass. Oberst has written some more experimental, indie rock music in his career, but this style seems to suit him the best. There were several times throughout the night where he would spin around while playing guitar, clearly full of joy and ferocity. When he played “Old Soul Song (For The New World Order),” his voice cracked sentimentally on the lyric, “They went wild.” It may have been a small detail, but it speaks to the relationship Oberst keeps with his songs as they both grow older.

In “Zigzagging Toward the Light,” we were able to sample the new album in full, live-action glory. The band seemed to beam during this song especially, as they reached a sort of musical climax together onstage. Oberst belted, “I’m blessed with a heart that doesn’t stop.” He’s been writing emotionally vulnerable songs since age 12, and to see him reach a state of well-earned performance bliss was an experience both fans and casual listeners could appreciate. As a special treat for Utahns, he played a song called “Moab,” whose lyrics proclaim, “There is nothing that the road cannot heal.” Oberst continued to stroke our state’s ego by expressing his gratitude for the welcoming kick-off to a tour and mentioning that Red Butte is an above average venue. “We’ll remember this fondly when we’re in the throes of Boise,” he said.

As the evening started to grow to an end, Oberst asked the soundman to turn all the lights blue on the stage for his last song. “If you could make it look the moon up here, that’s what I’m going for,” he requested. The band took a break while Oberst cozied up to a piano and played “The Ladder Song.” He looked like a cosmonaut, drifting meaningfully in space as he sang, “You’re not alone/Even if you’re trying to be.” It would have been a stark and sweet farewell, but it wasn’t long before he was back onstage for an encore. The band trumpeted “Travelin’ Song,” then played a favorite from Oberst’s 2008 album, “Cape Canaveral.” Finally, Oberst announced that the band would like to play a tribute to one their favorite folk songwriters, John Prine. In “Pretty Good,” they got a bit rowdy and jammed out for an intrepid finale.

At the end, a guy next to me apologized to his girlfriend that Oberst didn’t play, “First Day of My Life.” Maybe next time. Let’s hope Oberst continues to write, record and tour either as a solo musician or with Bright Eyes so that we can all continue to relive our days of teenage love and sorrow through his veteran musicianship.