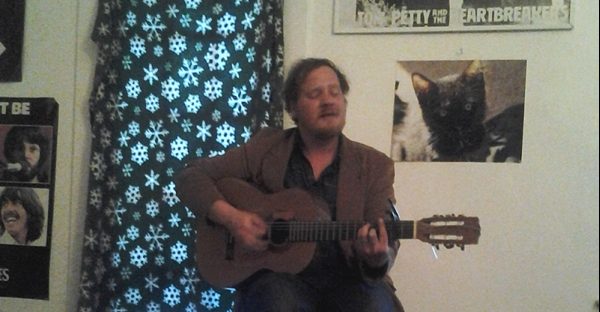 It’s not every day that one of the bands you’ve been listening to for the longest time rolls into town to play a show. Not only that, but it’s definitely not even every other blue moon that you’ll walk up a million flights of stairs to the top flat of a complex, open the door and see the lead singer of said band sitting powwow in the middle of the living room waiting to play a private set for you and a handful of folks. It turns out that every other moon was on Tuesday night and that artist happened to be Michael Nau of Cotton Jones.

Just down the road and giving the Urban Lounge a little competition, venue tenant George Coleman for one night only led strangers into his humble abode for a basket ride that no fan could pass up. I acquainted myself with Coleman’s cracked-out kitty Dr. Tobias Funke as the clock struck eight and the rest of us, 13, waited for latecomers. “10 more minutes?” asked Nau, also suggesting a sing along if the last few people on the list didn’t show up. What a shame, because everyone eventually made it and the show took off just as casually as it had come together.

Setting the mood, a stream of Christmas lights gleamed across the walls littered with Marvel comics, Star Wars, Tom Petty and cat posters while the fleeced snowflake blanket in the backdrop hid the setting sun and balcony. It was just then that Nau got to strumming his chipped nylon acoustic to a loose but clean version of, “The Spinning Wheel,” and Dub-Step Kid downstairs decided it was a good time to get a helping of Transformers Porn complete with sub-woofers. Putting the musical differences aside, we managed to find peace once again so Nau could gladly ask for requests and chat about the heat and in-van haircut he gave himself on the road from Boulder, where he drove out of that morning.

I like to think that requests are only as good as the people who ask for them. Either I was in good company or Cotton Jones has never made a bad song, since every newy and oldie tacked to the list brought an originality that I’ve yet to see in past shows with the whole band. “I’ve been trying to keep the rhythm open on this tour,” Nau said. “Every one of these nights has been so different, I just want to make these as enjoyable for everyone as I can.”

He delivered, starting request number one fretin’ away with, “Egg on A Sea,” a few octaves lower and a heartbeat slower, to open, so he could pick it back up and break into chorus a little further down the line. Every song kept such a different feel than I was expecting that night, that I’m still trying to fill in my mind what the same show would have sounded like had his wife Whitney, the brass and the rest of the band been there to make a melting pot of sweet, twisted harmony. Nonetheless, Nau didn’t sound a bit lonely when his tuned-up pipes and whistles filled in where the group should have been. If he’d been around in the ’30s, Disney would have paid that man good money to be a singing bird in Snow White.

Of course, no new experience, such as this one, can go without discovery. It was towards the end when I got a newfound appreciation for the song, “It May Never Pass Again.” The close quarters of the room had to be what did it, as Nau began to end his set belting loudly from every corner of his mouth and picking just as intimately. He’d finish with a new and nameless tune in the same fashion, treating everyone to a taste of the new album and tour awaiting the new-year––with full band.

Like that, it was over. The remaining eight people in the audience made our way out to the four-person balcony to down a smoke, breathe some fresh summer air and hear more stories from the adventurer of the night. A couple of us even walked away with some signed vinyls of 2009’s Paranoid Cocoon. I sure am jealous for those kids out in Portland on Friday and Saturday, because they’re in for something unreal.