It’s true she owes a lot to the slacker rock martyrs of the ’90s like Lou Barlow and J Mascis. Nobody writes a song with the chorus, “I don’t want no nine to five, telling me that I’m alive!” without having at least listened to You’re Living all Over Me once. But, just as you pigeonhole Barnett as some slacker rock disciple, she rips the roof off the joint with hostile sounding version of “Avant Gardener,” giving me chills like I’d just heard Joe Cocker for the first time. 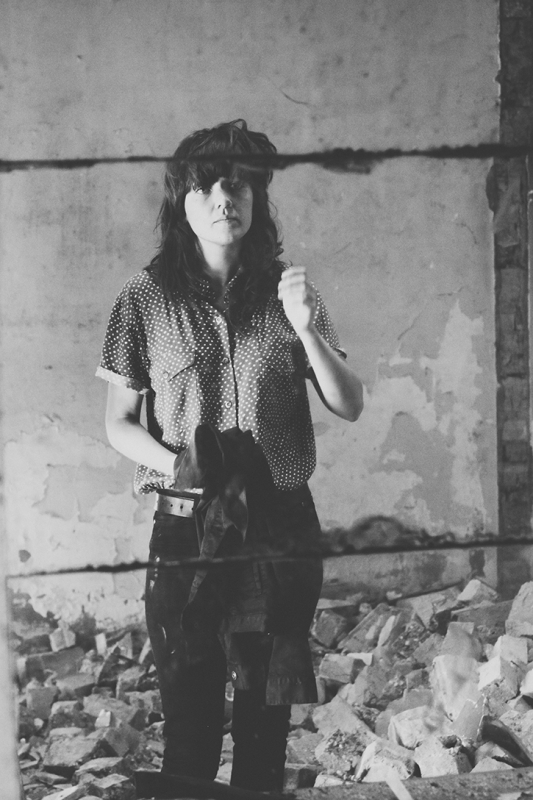 If music really is a matter of fuel, as Hunter S. Thompson posited, then Courtney Barnett might be the Tesla Model S of musical acts, releasing extraordinary amounts of energy with the efficiency and fervor of a gamma ray burst. It’s no wonder that her Double Ep: A Sea of Split Peas, released early this year, has been passed around like a MERS outbreak. That EP—played ad nauseam on KRCL—quickly became a favorite of mine, making its way to the top of my playlist nearly everyday. One of the standout tracks, the witty “Avant Gardener,” with its chugging momentum and droll observations, seemed more like the product of a Lou Reed and Stephen Malkmus collaboration than a twenty-something Australian with a ’90s slacker rock fixation. So, to say her show on Wednesday was greatly anticipated would be no stretch.

My anticipation got the best of me as I showed up (mostly) early to a (mostly) empty Urban Lounge, by myself with my usual accoutrements: Guerrero notepad, with hieroglyphic looking markings filling the pages only somewhat resembling English, a pen and jaundice looking bags under my eyes from staying awake for too long, reading the excellent and addicting oeuvre of Alice Munro. If you ever find yourself on a bender where sleep is not only impossible but also dangerous, try taking some Adderall and going to a kick-ass rock show. Not only will it fight off the Sandman’s lustful grip, but will also help you forget whatever it is you were trying to forget by going on a bender in the first place. Music isn’t fuel, it’s pain relief.

Speaking of numbing, the opening act, the Winfield, Kansas quintet Your Friend, seems to exist within the same dream pop universe of other morphine substitution groups like Beach House and M83, packing a more walloping and satisfying punch than either of those bands. I had never heard of these guys, but I came away more than surprised. They ooze beachy, Codeine like vibes but, happily, they are far more raucous than the dreary and dour style that bands like Codeine and Red House Painters perfected in the last decade. The bespectacled lead singer has an affecting tilt in her voice that never seemed to be aggressive or nasty, the way I like my singers. (More Patti Smith, less Stevie Nicks please).

The crowd was peppered with groups of middle-aged men, an exceedingly rare sight amongst the twenty-something mainstays who seem to multiply at these places. Towering over the ephemeral hairstyles of the youths, these men seemed to personify their midlife crises (finally, handlebar mustaches that don’t seem ironic) and, at least to me, are a welcome sight.

After spending a few minutes trying to figure out a strange handheld vaporizer—one that looked much like an inhaler with a battery sticking out of it—amidst the other indoor smokers, Courtney Barnett and her aptly named backing band—the Courtney Barnetts—came to the stage. She looks like a punk-ish Arya Stark and is just as deceptively deadly, though she’s all smiles tonight. In fact, the whole three-piece seems to have just exited a dimple factory, flashing white teeth and giggling with excitement. I like their earnestness, too many bands seem bored or too concentrated on stage, but the good ones know how to have fun.

They play a few songs off their EP, like “Out of the Woodwork,” the opening track off that album, and they don’t stop playing for quite some time, showing an endurance that would make 17-year-old me jealous. “Lance, Jr.,” a whip smart song with a “Louie, Louie” riff, opens with the line, “I masturbated to the songs you wrote,” and her charms became apparent to everyone in the crowd. My new friend, with the vaporizer disguised as inhaler, turns to me and says, “She makes me want to quit my job.”

It’s true she owes a lot to the slacker rock martyrs of the ’90s like Lou Barlow and J Mascis. Nobody writes a song with the chorus, “I don’t want no nine to five, telling me that I’m alive!” without having at least listened to You’re Living all Over Me once. But, just as you pigeonhole her as some slacker rock disciple, she rips the roof off the joint with hostile sounding version of “Avant Gardener,” giving me chills like I’d just heard Joe Cocker for the first time.

They end their set with an extended jam version of “History Eraser,” the “Heroin” to “Avant Gardener”’s “The Gift.” Of course, the crowd coerces her to return alone with her guitar to sing a lullaby to cap the night off. And after three-and-a-half minutes of comedown ecstasy, the crowd heads to the street and I hit the pavement toward home.