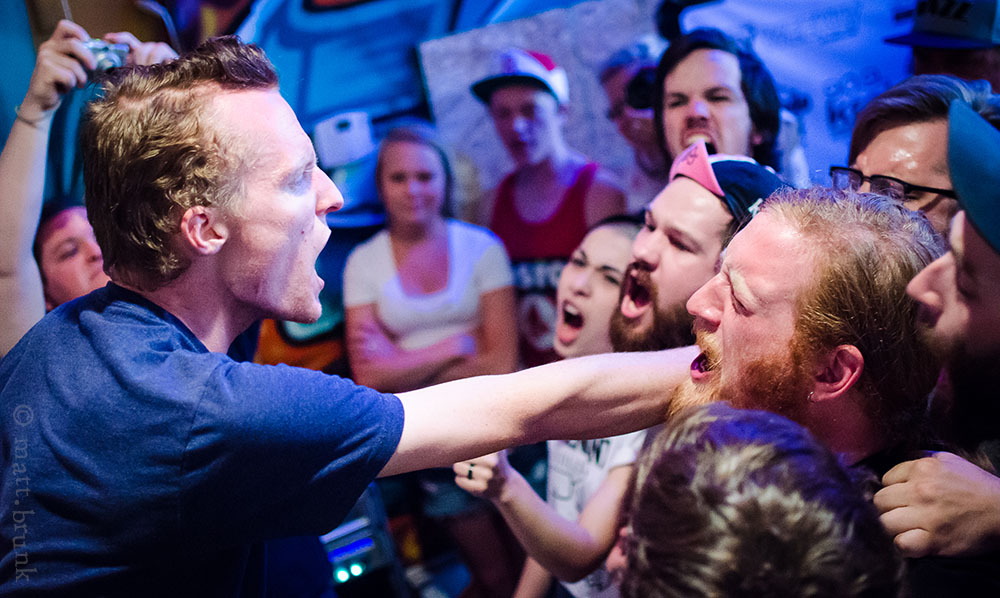 Nothing was coming out of the PA system. “Maybe it’s the input? No, how about the channel? No.”

It was two thirty in the afternoon, the show hadn’t started and already the sound guys were drunk. It was too hot to be drunk that early in my opinion, but I heard on several occasions that Crucialfest is “the four drunkest days of your year.” Many of us there had been there everyday—open to close, from Club Metro to Wasted Space, beer after beer after beer—we were Iron-Manning that shit.

Light/Black were desperately trying to get the mic to work, but after a complete replacement of both the mic and cable, everything was in order. Being the first band in a long string of bands is difficult, a lot of people were at Wasted Space drinking or in the parking lot pre-gaming for the day. That being said, Light/Black fucking rock. I saw them last year at Localized and was so impressed, I bookmarked their home page afterward and showed a few friends. Light/Black have a crunchy, shoegaze quality, Vocalist/Bassist Carri Wakefield’s croons are distant, sorrowful. They sound like a solo space capsule stuck in the event horizon of a black hole—hopeless ordered chaos and destruction. Songs like “The Gift” draw you in, then mentally fuzz you out—you can’t help but hypnotically headbang. Light/Black got off the stage and everyone made a B-line to Wasted Space to get a booze injection and hear their next act.

Coming back from Wasted Space a few ounces heavier, I made it just in time to hear the next act. Light/Black doomed up the room, now it was time for Døne to clear the air and funk up the place. Døne is a bass/drum duo consisting of legendary producer Andy Patterson and Cache Tolman of Iceburn. Døne is awash in psych rock bass and stoner metal groove, but with heavy funk undertones. Tolman thumps only a bass, but the sounds that come out shreds harder than most guitars out there. Tolman’s tenor vocals are a great example of why metal should have a more Ozzys and less Dani Filths. Being a reunion show, there were moments where both members forgot how to play a song and just went on to the next one. I don’t know what is so appealing to me about duos, but the complexity and hues that come out of only two musicians is crazy.

Once again, everyone made a B-line to the bar, except myself and fellow SLUGer Gavin Sheehan, whose was there to cover the show for a sister publication. We BS’ed about the city, the Salt Lake scene and other things I can’t remember now. You could hear Of Feather and Bone playing down the street and it sounded pretty good.

Up next to play was local outfit, Die Off. Die Off sound like they came right out of the blooming Southern metalcore scene. Their style is distended with sludgy sewage, rusty vocals and jagged riffs crisscrossing the soundscape. Darren Watts leads the songs with his fingers rapidly moving up and down the neck of the bass, providing most of the soloing and structure to the songs. What really brings it home for me is that their drummer, Chase Cluff, plays drums AND is the lead vocalist. The idea of screaming, playing drums and not puking all over your snare in the first three minutes deserves some kind of an award. That’s not to say Shaun Conway, backup vocalist and guitarist, isn’t special too, it’s just that I’m not used to drummer/vocalist combos. “Promises of Scavengers” was their strongest song out of their set and is my favorite song off of their release, so check that out. All in all, Die Off deserves more recognition than it gets for being such a beautiful amalgamation.

The music stopped and everyone rushed to Wasted Space because Gaytheist was playing. I mean, c’mon, it’s Gaytheist, who wouldn’t want to go? I got to see “Post Apocolyptic Lawsuit” sans backup vocals and chatted up SLUG Managing Editor Alexander Ortega before I rushed to catch Abrams.

Abrams was up to bat and they were the only band on the bill I hadn’t heard of. Not to my surprise, they’re great, go figure. They have a post-punk sound with a Red Fang tinge or how I imagine it, Torche but with chest hair (FYI, Guitarist Zach Amest played shirtless and that dude has got some wicked chest hair. As a fellow hirsute man, I felt a bit of pride well in me. Hairy men unite!). I know a couple of these dewds are in another band and I can’t for the life of me remember their name. Anyways, Abrams, one of the tightest bands I’ve heard in a while, speed through their song, stop on a dime, then rev back up (see “Sea Salt Line”). They closed out their set and everyone ran over to Wasted Space for shots and cheap beer. I on the other hand stopped the Pie Hole for veggie pizza because drinking on an empty stomach is a stupid thing to do.

Up next was Call of the Void, one of the more well know bands from the Intermountain West. These guys are fucking intense. Cult Leader intense. Like “I’m going to fuck you up if you get in my way” intense. I mean, they play so hard the drummer does stretches before the show. I’m pretty sure if you put them on tour with Harm’s Way and Cult Leader, riots would break out in every city they played. Lead singer Steve Vanica went shirtless (what is it with Colorado people playing shirtless?), pacing, paving himself a performance area. Had he not been so god damned intimidating, moshing would have ensued, but I was too nervous to even nudge him, for fear he’d break my nose. I already lost my glasses to the Cult Leader show the night before and wasn’t going to push my luck. Seriously though, I had a bit of a bangover the next day from how great their music was.

Next on the bill was the Eons reunion. Arguably one of the more loved SLC bands in the last three years, the crowd swelled and tucked in. I love Eons. Their EP, The Weight of Tragedy, got me through hard times last year—a lot of crying, a lot of seamless late nights chainsmoking in the bitter cold. Seeing how I was midway to being drunk, those raw emotions were abruptly disinhumed and by the end of their set, I felt like a mess.

The band opened up with “Back Home” and the people lost their shit. People charged the stage from their already close quarters. Vocalist Tyler Blackburn climbed atop the audience, crawling along our hands, his arms and fists clenched for most of the song. Blackburn collapsed onto the floor near the end of the song, panting. Before he could recover, the band broke into the song “Hide and Seek” and dear reader, you will never experience such a cathartic joy like being surround twenty other people screaming the same lyrics into the same microphone. A part of me really wishes Eons never broke up, but endings mean new beginnings, it means more music.

Eons ended their set and Jesse Cassar, owner of the Shred Shed (who was three sheets to the wind), started cracking lame jokes and interviewing the audience about what they just experienced. I waited for the Heartless Breakers to set up and they were ready to go, but they pushed their performance back so everyone could see the legendary INVDRS at Wasted Space.

Finally, Heartless Breakers closed out the show at the Shred Shed. The first thing I noticed about the Heartless Breakers was how out of place they sounded on the bill. I mean, they’re great, they’re just not that heavy. Putting that aside, the played a great set. A sort of alt rock and punk rock mix, I really enjoyed it. They remind me what I like about bands like The Lawrence Arms and the pop-punk sounds played by Problem Daughter. I’ve never heard them live before and I really wish more people stuck around to see them (there was still a show at Urban Lounge later that night.

Heartless Breakers finished their set and I Iron-manned my way to the Urban Lounge for another beer and another show.