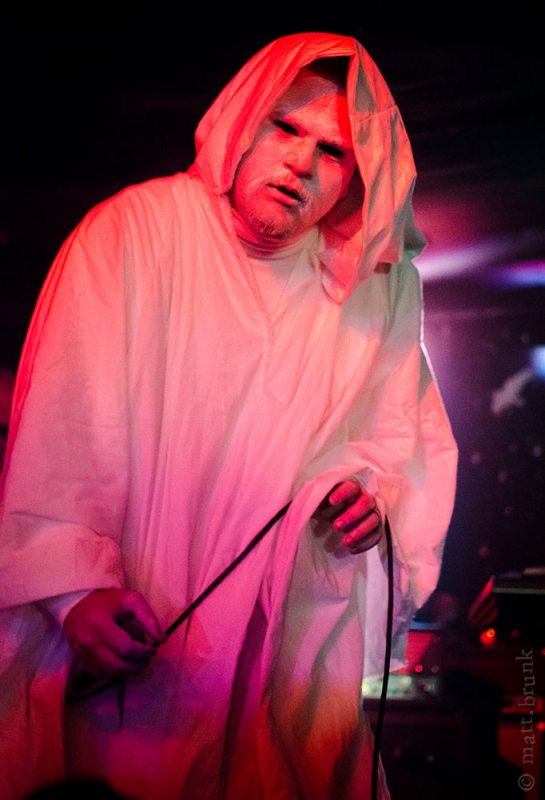 There’s nothing like a good night of metal in the highly doom oriented realm to brighten your Thursday evening. Crucial Fest 4 built some good momentum going into the weekend at Bar Deluxe with a seemingly smaller crowd than the kickoff show the night before but a just as enthusiastic show for the heavy crowd. There’s also the inkling that a good slew of the fans that may not normally hit a local show up with some of the bands on the bill were able to have their heads exploded with loud skull crushing riffs and bass tones enveloping the club. I chose to review the festivities in particular for this evening looking forward to seeing the Boise-based doom duo Wolvserpent (with releases on Relapse Records) as well as Gravecode Nebula following up a successful and mind altering CD release show for their debut album The Sempiternal Void. There were some nice surprises with the other bands on the bill. Good tunes and just as great folks in the crowd, meeting some new folks and the familiar faces. Though I have to admit that if it takes a four day music festival to get more folks to come out and see local music that’s always going on is kind of a negative. Then again there is much to be applauded in the same ideal that the Crucial Fest helps bring new interest in people seeing a band they might not have known about before.

First up to take the task of playing for the crowd making it’s way into the show was Danger Hailstorm, a band I had heard of by name and only in a roundabout way, by acquiring a CD of some of their tunes at Raunch Records, which I never got around to listening too. I didn’t know what to expect from the guys at all. Danger Hailstorm were the “good eggs” of the show, bringing an energetic set of comparatively more happy sounds to my ears then the rest of the night would offer. Unbeknownst to me, the band would bring the first surprise of many to my ears and eyes for the evening. While the peppy rock/punk sound of the guys wouldn’t be something I’d normally listen to, they pulled off their show tight with bounds of energy, with crunchy bouncy riffs combined with some nicely dynamic melodies and a vocalist that reminded me a bit of what a more rock oriented Offspring might come across as.

Rolling on the stage next with an actually quite surprisingly short band change-up, (kudos to Bar Deluxe), was Yaktooth and the first sense of imminent and immediate dread. The three-piece sludge riddled band has been making rounds in Salt Lake for a while. They have an album, Consensual Healing, available for the willing. Ominous and slower tuned sounds started the band off before they delved into some gravelly dreadful riffing and screamed vocals only to be accompanied by some tightly played melodies, a bit ominous like a warning of some foreboding pain. The melodies charged the atmosphere for the crunch and crushes to come. Yaktooth do a good job at changing the pace and sound from heavy to melodic and with that task done as well as they d,o it has a great knack of engaging the audience to wonder what will come next. Also in the mix Yaktooth experiment with some prog/jazzy/mathy riffing. Which in juxtaposition of the crunching moments the band gives, it adds further dynamic to the band that isn’t necessarily done a great deal in for the multitude of metal/hardcore sub-genres one could place Yaktooth in.

While listed on the band schedule, The Moths did not happen to play. Some good advice for any band that feels like confusing folks, it’s always good to chance your name at the last minute on a show you’ve been billed as one name for a good few months. In any regard that’s what Jetty did becoming Team Dead – which for their brand of gritty hardcore does happen to be a better name than Jetty. The four-piece band came out all guns blazing and added another surprise for my evening—a stellar set of hardcore sounds. The nice touch to the bands sound was the tone of the guitar down tuned in a significantly different sound than typical chugging hardcore bands happen to do. With a seemingly monstrous front man on the mic, the hardcore sound wiped away a bit of the dread and ominous sounds of Yaktooth and brought the anger in. The vocalist happened to have his back away from the crowd frequently adding an almost—in their own world—type performance to the bands show.

One of the first non-local bands, Boise, Idaho’s atmospheric doom duo Wolvserpent came next and the atmosphere came in many ways. Before the band began to play, incense was burned, adding a distinctive but also pleasant, almost oddly refreshing odor washing away a bit of the sweaty armpit smell any venue develops after a few bands during the summer have played. Wolvserpent live, as compared to on recordings – which have long, developed songs – took the task of interpreting their atmospheric style in the shorter live format setting and accomplished it beyond greatly. The set started with the bands drummer providing a relatively lengthy violin introduction. The violin set the wheels of doom in motion with a somber sound that helped build that atmosphere of a diminishing dreadful mind. The drumming began still with a slow pace and subdued guitar distortions starting to fill the air. It’s exactly what Wolvserpent do, take their song approach and build adding layer and layer the next being some higher toned guitar distortion and playing then the next being full bore loud and heavy snowball momentum building doom. The accomplishment for the band live is having such length and being able to hold the audience in a great way – one could almost say for the willing minded the hold is almost hypnotic. So taking what is a massively developed sound on record and translating that live as well as Wolvserpent delivered it ensured that if I ever have the chance to see the duo again, I will be in attendance.

Oh how the most stable of mind can be completely crushed by something like music. The power of Gravecode Nebula is the dynamics and diversity in what could be labeled as death/black/doom, but is something so much more. I like to shoot my words out at times and not to sound like a gooey fanboy, but in a perfect world Gravecode Nebula should become a name in metal, something kids decades from now will sport on band T’s and patches in pride. Gravecode Nebula brought some new visuals to their already equally visual as well sonic performances to their set at Crucial Fest. A backdrop behind the drummer played some dismal visuals. With the vocalist, who in the past has worn a completely black robe, entered the stage wearing a white robe, appearing ghost like with a white face and black eyes providing a visually striking appearance. Following the long song format of Wolvseprent the audience didn’t get a break. Gravecode’s set held long songs but with superb execution despite some guitar technicalities prior to the start of the bands second song. On the bands recorded work the sound plays out as a dynamic and layered sound with so much to take in with every listen. Gravecode’s ability to translate the sounds from record and make them even more engaging live is something of rare form. From dreadfully slow paces with noise and sound bouncing in craniums at every turn to increased, almost fast black metal styled tempos to atmospheric dread Gravecode have the ability to alter any listeners minds. The sound and visuals all comprise mental stability and envelope the audience to full on can’t look away at a car crash ability. Like I mentioned before about shooting my mouth like a gooey fanboy if the opportunity arises to see Gravecode Nebula, go see them play because your experience at any given show will surely be a different one and something that no matter what your favorite genre or style of music is – the band’s ability to strike emotion into the listener is a destructive and fantastic one.

Last and certainly not least, to close out a night of intense and varied sound was SLC increasing in metal fame came SubRosa. A band I’m sure many fans and Crucial Fest goers came to see. With three full-length records out SubRosa stuck pretty much from my shady memory to songs from their newest album More Constant than the Gods. The strength of SubRosa is shown in a night that felt a little off for the band in my opinion, compared to previous times I’ve seen the band play is the strength that even on a bit of an off night they can still get the crowd moving. Speaking of moving, all of the members of Subrosa are rarely still. The bands two violinists seem to constantly be moving. When front woman Rebecca Vernon isn’t singing and playing guitar, something not many bands even try to attempt to do, she’s moving with the heavy hits of Subrosa’s doom. Back to the commentary on things feeling off, the off portion was less about the bands performance but more in regards into how the sound was dialed in. Which was strange considering the audio quality of the other bands. Then again SubRosa brings a hefty amount of amplification gear to their stages shows, the thing that makes them so much heavier sounding live than on record. Vernons’ vocals also were lower than they should have been, because her voice is the narrative deliverance of the subject matter SubRosa is so passionate about. Although violinist Sarah Pendleton gave some growled vocals, which I’m not sure is a new thing or not, so please forgive my possible ignorance because I admittedly have not spent as much time with the newest record from the band as previous ones. The constant movement of the band and the crowd added to the already charged atmosphere. So my vocalization on the sound of the show in it’s actual reality is pretty moot. I know these days to expect SubRosa delivers the volume as loud as possible without completely distorting everything, it’s something I know they will continue to do. They’re gear gurus and amplifier/pedal worshipers.

With night two down and two more days of music to go Crucial Fest 4 has already given a lot of great bands. The night all this music going down at Bar Deluxe, just down the street at Burt’s Tiki Lounge, CF also had six bands playing. The idea was for the folks that purchased their wristbands for the whole fest could see one band at one venue while the other venue was doing the band change over. I don’t know fully how it all worked out in the end. But for the folks that entertained the option to attempt to take in 12 bands in one evening, that’s a lot of music and a lot of talent mostly locally driven. Also to close things up, night two at Bar Deluxe was one of the nights not to miss, full of talent and some of the loudest harshest metal, the fest and Exigent records dubbed the night and the show the “Doom Room.”